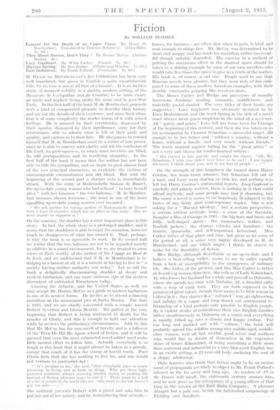 Lucy Gayheart. By Willa Cather. (Cassell. 7s. 6d.) M. HENRI DE MONTIIERLANT'S Les Celthataires has been "Very well translated, but given in English a quite unsatisfactory title, for its tone is not at all that of a lament. It is an incisive study of decayed nobility in a shabby modern setting, of the

Messieurs de Coetquidan andole Cdantre to be more exact, an uncle and nephew living under the same roof in post-War Paris. In the first half of the book M. de Montherlant proceeds with a kind of exasperated:pleasure to describe their history and set out the details of their existence, and since their situa- tion is of some complexity the reader learns of it with mixed ," feelings. He is amused by. their eccentricity, depressed by their squalor, dismayed by their significance, sorry for their Misfortunes, able to admire what is left of their pride and ' quality, and curious as to their fate. He also pauses to remind himself that M. de Montherlant must be a writer. of rare power, since he is able to convey with clarity and wit the confusion of life itself, its grotesqueness, to which most novelists are blind, [ its odd juxtapositions and its terrifying absurdity. In the first half of the book it seems that the author has not been able to hide his sympathies, and we begin to grow almost fond of the two principal characters, so evidently the victims of .1 unmanageable circumstances and old blood. But with the

Ibeginning of the second part a sharper note is immediately struck. With the entry of Mademoiselle Simone de Bauret,

the up-to-date young woman who had refused to bury herself alive " with her kinsmen " the two baboons," M. de Monther- lant becomes almost ferocious : she must be one of the most appalling up-to-date young .women ever recorded :

" We ask pardon for having spoken of Mademoiselle de Bauret with a kind of shudder, which has no place in this story. But we were unable to suppress it."

On the contrary, the shudder has a most important place in this story. In fact, the whole story is a-prolonged shudder, and it seems that the shudderer is able to enjoy his sensation, however much be disapproves of what has caused it. That, perhaps, is why the book is so agreeable to read, In its second half we realize that the two -baboons are not to be regarded merely as oddities in a sound environment, for we are treated to some views of Paris worthy of the author of the Voyage an Bout de la Nnit, and we understand that if M. de 'Montherlant is in- dulging in a lament at all, it is a lament at having to live in " a society having:neither authority nor. order." Let us call the

book a delightedly discriminating shudder at decay and modern barbarisM; and one more ominous sign of the restless discontent of cultiVated Frenchmen today'.

Crossing the Atlantic, and the United States as well, we may accept Mr. Horace McCoy as a guide to Modern barbarism hinne of itsnetitest'forms. He invites us to attend a dancing marathon on the amusement pier at, Santa Monica. The date is 1935, and we are chiefly concerned with ,a couple named Robert Syverten and Gloria Beattie. We gather at the very beginning that Robert is being' sentenced. to death for the

murder of Gloria, and this is enough to lipid our attention while lie reviews the preliminary circumstances. Add to this that Mr. McCoy has the rare merit of brevity and is a follower of the Then-He-Hit-Me-Again school of fiction, and it will be guessed that even the most'exhausted novel-addict need make little mental effort to follow him. Actually everybody is So tough in this book that it might almost be taken as a parody, except that much of it has the stamp of horrid truth. Poor Gloria feels that she has nothing to live for, and one would not venture to contradict ,her : •

" It's peculiar to me,' 'she said,.' that Overybody.pays so Mach attention to living and so little to dyizilg. Why are these high- powered scientists alwayS screwing around trying to prolOng life instead of finding pleasant ways to end it ? There must be a hell of a lot of people in the world like me--who want to die but haven't

She suddenly presents Robert with a pistol and asks him to put her out of her misery, and he, remembering that animals— horses, for instance—are often shot when in pain, is kind and rash enough to oblige her. Mr. McCoy was determined to be short and snappy and has made his marathon rather too event - ful though suitably degraded. His exercise in a method of getting the maximum effect in the shortest space should bo taken as a shining example by some of our own novelists who would take five times the space to give us a tenth of the matter. His book is, of course, a sad one. People used to say that Iliissian novels were gloomy, but they were riots of fun corn- pared to some of these modern American examples, with their deathly wisecracks popping like revolver-shots.

The Misses Cattier and Bridge are purveyors of morally innocuous feminine reading, romantic, middlebrow, and tastefully pastel-shaded. The very titles of their books are suggestive : Lucy Gayheart was 'obViously destined to be Lucy Brokenheart, and the word Spring in the title of a novel must always incur grave suspicion in the mind of a reviewer. All " gaiety and grace," Lucy left her home town for Chicago at the beginning of this century, and there she was taken on'as his accompanist by ('lenient Sebastian, a successful singer, Old enough to be her father and without a country, without home, Without' a family, and very nearly without friends." The rustic musical ingenue falling, for -the " great artist " is not a very safe theme for tender-hearted writers : " She turned to him quickly and caught his sleeve. Oh, Mr. Sebastian, I wish you didn't ever have to be sal I I am happy whenever I think about you, and so are lots of people . . 17 On the strength of this happines's she turned down Harry Gordon, her home-town admirer, but Sebastian fell out of a boat, and Lucy went skating on thin ice, and nothing was left but Harry Gordon's sentimental regrets. Lucy Cayheait is carefully and plainly written, there is nothing in it that could offend anybody, and some people may find it charming, biit like many a novel it seems to one hopelessly ill-adapted to the tastes of any fairly alert. contemporary reader. One is not asking for a " Marxist ideology," but a certain perspective, a certain critical attitude, irony, a sense of the fantastic. Imagine a film of Chicago in 1901—the big hats and busts and frilly, bell-shaped skirts ; the moustaches, collars, and Norfolk jackets ; the strange vehicles and furniture ; the remote, spasmodic, and self-important behaviour. Miss Cather writes of that place and time, but gives us no sense of the period at all, a sense very highly developed in M. de Montherlant, and one which might, I think, be shown to make for the durability of fiction.

Miss Bridge, although describable as an up-to-date and I believe a best-selling writer, seems to me to suffer equally from a lack of susceptibility- to the strangeness of ordinary life. She writes of the present, and like Miss Cather is better at descriliag women than men. She tells us of Lady Kilmichael, 42, who leaves her lia,,band for a while and goes off to Dalmatia, where she spends her tinge with Nicholas, 22, a dreadful softy with a mop of curly hair. They are both supposed to be painters of great talent, though there seems to Le little reason to 1. elieve in it ; they chatter in a " cultured " way, go sightseeing, and indulge in a vague and long drawn out sentimental re- Int kinship of a kind perhaps only possible to English people. By a violent 'stroke of coincidence their nice English families arrive simultaneously in Dalmatia on a cruise and eVerything is rapidly tidied up into a chaste and happy ending. ' Far too long and padded out with " culture," the book 1will probably spread like wildfire among nice middle-aged, middle- class women, well off but wistful,. good wives and mothers who would like to dream of themselves in the expensive shoes of Grace -Kihnichttel; of being something a little more than maternal and influential to a nice bhie-eyed English boy in an exotic setting, a 2-2-year-old body enclosing the soul of a sloppy adolescent. '

Only fanatics who think that fiction ought to be an instru- ment of propaganda are likely to object to Mr. Frank Pollard's

interest in the far away and long E4o... As readers of Al! in the Downs will recall, the eighteenth .e'entury amuses him, and he now gives its the'adventures of a young officer of that ;t1lickv in the service or tile East India Company. A pleasant draught but a pale one, beside the full-bodied outpourings of