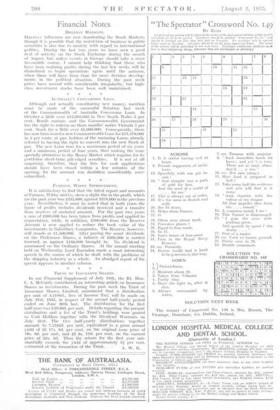 It is satisfactory to find that the latest.report and accounts of Furness, Withy and Co. show a slight rise in the profit, which for the past year was £395,000, against £378,000 in the previous year. Nevertheless, it must be noted that in both years the figure of profits includes dividends received and a transfer from reserves of unstated amount. For the past two years a sum of £300,000 has been taken from profits and applied to depreciation, while, in addition, £500,000 from the Reserve Account is now applied to reduce the book value of the investments in SUbsidiary Companies. The Reserve, however, still stands at £1,500,000. After paying the usual dividends on the Preference Shares, a balance of £203,000 is carried forward, as against £106,000 brought in. No dividend is announced on the Ordinary Shares. At the annual meeting held on Wednesday Lord Essendon made a most interesting speech in the course of which he dealt with the problems of the shipping industry as a whole. An abridged report of his. speech appears in another eolunin.