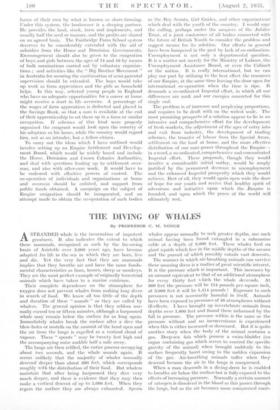 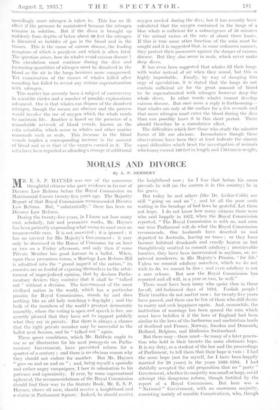 THE DIVING OF WHALES

ASTRANDED whale is the incarnation of impotent greatness. It also indicates the extent to which these mammals, recognized as such by the far-seeing brain of Aristotle over 2,000 years ago, have become adapted for life in the sea in which they are born, live and die. Yet the very fact that they are mammals implies that they breathe air and have the same funda- mental characteristics as lions, horses, sheep or monkeys. They are the most perfect example of originally terrestrial animals which have taken to a marine existence.

Their complete dependence on the atmosphere for oxygen does not prevent whales from making long dives in search of food. We know all too little of the depth and duration of these " sounds " as they are called by whalers. The general opinion is that they seldom nor- mally exceed ten or fifteen minutes, although a harpooned whale may remain below the surface for as long again. Immediately whales break the surface after a dive the blow-holes or nostrils on the summit of the head open and the air from the lungs is expelled as a vertical cloud of vapour. These " spouts " may be twenty feet high and the accompanying noise audible half a mile away.

The lungs are then refilled, the entire process occupying about two seconds, and the whale sounds again. It seems unlikely that the majority of whales normally descend deeper than about 800 feet, which corresponds roughly with the distribution of their food. But whalers maintain that after being harpooned they dive very much deeper, and there is evidence that they may then make a vertical descent of up to 5,000 feet. When they regain the surface they are always exhausted. Sperm whales appear normally to seek greater depths, one such animal having been found entangled in a submarine cable at a depth of 3,000 feet. These whales feed on giant squids which live in the middle depths of the oceans and the pursuit of which possibly entails vast descents. The manner in which air-breathing animals can survive these amazing dives is a matter of great scientific interest: It is the pressure which is important. This increases by an amount equivalent to that of an additional atmosphere for every thirty feet which the whale descends. At 800 feet the pressure will be 154 pounds per square inch, at 8,000 feet it will be 1,414 pounds l Exposure to such pressures is not. necessarily harmful in itself. Animals have been exposed to pressures of 40 atmospheres without ill-effects.. I have brought up invertebrate animals from depths over 1,000 feet and found them unharmed by the fall in pressure. The pressure within is the same as the pressure without and no inconvenience is experienced when this is either increased or decreased. But it is quite another. story when the body of the animal contains a gas. Deep-sea fish which possess a swim-bladder (an organ containing gas which serves to control the specific gravity of the animal) when brought suddenly to the surface frequently burst owing to the sudden expansion of the gas. Air-breathing animals suffer when they descend because the air in the lungs is compressed.

When a man descends in .a diving-dress he is enabled to breathe air below the surface but is fully exposed to the effects of increasing pressure. Normally a certain amount of nitrogen is dissolved in the blood as this passes through the lungs, but as the air becomes more compressed corre- spondingly more nitrogen is taken in. This has no ill- effect if the pressure be maintained because the nitrogen remains in solution. But if the diver is brought up -suddenly from depths of below about 30 feet the nitrogen is• liberated as bubbles of gas in the blood and in the tissues. This is the 'cause of caisson disease, the leading symptom of which is paralysis and which is often fatal. The question arises, how do whales avoid caisson disease ? The 'circulation must continue during the dive and increasing quantities of nitrogen must be dissolved in the .blood as the air in the lungs becomes more compressed. Yet, 'examination of the • tissues of whales killed after sounding has failed to reveal any serious supersaturation with nitrogen. • • This matter has recently been a subject of controversy in scientific circles and a number of possible explanations advanced. One is that whales can dispose of the dissolved nitrogen, though the means are obscure and the process Would involve the use of oxygen which the whale needs to maintain life. Another is based -on the presence of a remarkable network of blood vessels, known as •the tetra mirabilia, which occur in • whales and other marine mammals such as seals. This increase in the blood vessels implies a corresponding increase in the amount 'of blood and so in that of the oxygen carried in it. The relia'haye been regarded as affording a storage of additional oxygen needed during the dive, but it has recently been calculated that the oxygen contained in the lungs of a 'blue whale is sufficient for a submergence of 50 minutes if the animal swims at the rate of about three knots. -If this is true Some other function of the retia must be sought and it is suggested that, in some unknown manner, they protect their possessors against the danger of caisson disease; But they also occur in seals, which never make deep dives.

It has even been suggested that whales fill their lungs with water instead Of air when •they 'sound, but this is highly improbable. •• Finally, by way of damping this orgy of speculation, it is ' stated that the lungs do •not contain sufficient air for the great amount of 'blood to be supersaturated` with nitrogen however deep the whale dives. In other words whales cannot develop caisson disease. But once more a reply is 'forthcoming— that whales are only at the surface for a feW seconds and that more nitrogen must enter the blood during the dive than can possibly leave- it in this short period. There should therefore be a cumulative effect. • The difficulties which face those-who study the minuter forms of life are obvious. Inconclusive though these observations have been they at least indicate the almost equal difficulties which beset the investigation of 'animals which may exceed 100 feet in length and 150 tons in weight.