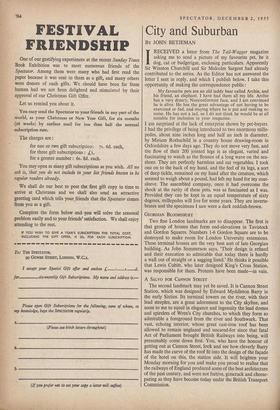 BY JOHN BETJEMAN IRECEIVED a letter from The Tail-Wagger magazine asking me to send a picture of my favourite pet, be it dog, cat or budgerigar, enclosing particulars. Apparently Sir Winston Churchill and Sir Malcolm Sargent had already contributed to the series. As the Editor has not answered the letter I sent in reply, and which I publish below, I take this opportunity of making the correspondence public : My favourite pets are an old teddy bear called Archie, and his friend, an elephant. I have had them all my life. Archie has a very dreary, Nonconformist face, and I am convinced he is alive. He has the great advantage of not having to be exercised or fed, and staying where he is put and making no noise. He has not a tail, so I do not think he would be at all suitable for inclusion in your magazine.

I am surprised at the lack of enterprise shown by pet-buyers I had the privilege of being introduced to two enormous mille- pedes, about nine inches long and half an inch in diameter, by Miriam Rothschild in a country house drawing-room in Oxfordshire a few days ago. They do not move very fast, and the flow of their 200 jointed legs is as elegant, varied and fascinating to watch as the flounce of a long wave on the sea- shore. They are perfectly harmless and eat vegetables. I took one on to the back of my hand, and the feel of its legs, a sort of deep tickle, remained on my hand after the creature, which seemed to weigh about a pound, had left my hand for my coat- sleeve. The assembled company, once it had overcome the shock at the rarity of these pets, was as fascinated as I was. Provided they can be kept in an equal temperature of sixty degrees, millepedes will live for some years. They are inverte- brates and the specimens I saw were a dark reddish-brown.

GEORGIAN BLOOMSBURY Two fine London landmarks are to disappear. The first is that group of houses that form end-elevations in Tavistock and Gordon Squares. Numbers 1-6 Gordon Square are to be destroyed to make room for London University extensions. These terminal houses are the very best sort of late Georgian building. As John Summerson says, 'Their design is refined and their execution so admirable that today there is hardly a wall out of straight or a sagging lintel.' He thinks it possible that Lewis Cubitt, who later designed King's Cross Station, was responsible for them. Protests have been made—in vain.

A SALVO FOR CANNON STREET The second landmark may yet be saved. It is Cannon Street Station, which was designed by Edward Myddleton Barry in the early Sixties. Its terminal towers on the river, with their lead steeples, are a great adornment to the City skyline, and seem to me to equal in elegance and ingenuity the lead domes and spirelets of Wren's City churches, to which they form so admirable a foreground from the river and Southwark. That vast, echoing interior, whose great cast-iron roof has been allowed to remain unglazed and uncared-for since that fatal Act of Parliament brought British Railways into being, will presumably come down first. You, who have the honour of getting out at Cannon Street, look and see how cleverly Barry has made the curve of the roof fit into the design of the façade of the hotel on this, the station side. It will brighten your Monday morning for you and make you proud to realise that the railways of England produced some of the best architecture of the past century, and were not furtive, gimcrack and cheese- paring as they have become today under the British Transport Commission.