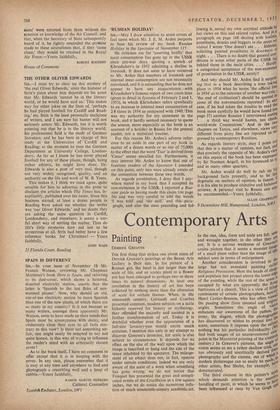 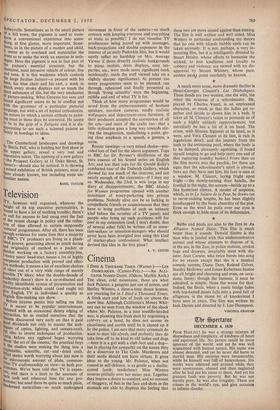 THE first thing that strikes one about some of Derrick Greaves's paintings at the Beaux Arts Gallery is their size. In his picture of a Roman girl, the head is just larger than the scale of life, and an azalea plant in a flower pot has been enlarged to perhaps two or three times its natural dimensions. At least one revolution in the history of art has been achieved by nothing more than the alteration of scale for certain themes. When, in the nineteenth century, Gericault and Courbet presented common, modern subjects on a scale hitherto reserved for history or mythology, they offended the majority and assisted in a further transformation of art. Today it is doubtful whether even the appearance of a full-size lavatory-pan would excite much criticism. I mentioh this only in my attempt to discover Greaves's intention, for scale is also subject to circumstance. It depends for its effect on the size of the wall upon which the image is inscribed or hung and the size of the space inhabited by the spectator. The enlarge- ment of an object does not, in fact, operate under certain conditions; indeed we are only aware of the scale of a work when something has gone wrong; we do not notice that Fouquet has presented the great and compli- cated events of the Crucifixion in a few square inches, but we do notice the monstrous infla- tion of much nineteenth-century academic, art. In the one, idea, form and scale are felt, seen and wrought together, in the other they nee not. It is a serious weakness of Greavess azalea picture that it seems a monster itanlie of a small plant rather than the image of this

.n Another consideration is involved 11 A large but not oversized painting calla` Religious Procession. Here the heads of eler and populace just project above the lower of the painting, while the rest of the space is occupied by what are apparently the. flying buttresses of a church. This is a view of thIas reminiscent of certain photographers, 110(ablAY Henri Cartier-Bresson, who has often viewfrt the passing show from unusual and origille' angles. Sometimes the angle of visit° enhances our awareness of the pathos the irony, the disgust, which the photograPher the has discovered or wishes to project into scene, sometimes it imposes upon the sl a Hee' nothing but his particular individuality (e find both usages of an unconventional vie°'h t point in the Mannerist painting of the sixteen f century.) In Greaves's pictures, the angle. vision seems to me a rather shallow trick,.O.eoic too obviously and uncritically derived try photography and the cinema, out of svt left g modern Picturesque can so easily be made, n5 other artists, Ben Shahn, for example, have demonstrated. The third element in this painter's vv0elz which demands attention is the asseetiv handling of paint, in which he seems to have been influenced at once by Van Gogh' an Rebeyrolle. Sometimes, as in the small picture if a hill town, the pigment is used to trans- form a conventional experience into some- thing, at first glance, more important. Some- times, as in the picture of a mother and child, It seems so to overload and materialise the event as to make the work an exercise in tech- nique. Here the pigment is not in fact part of the picture's essential structure, but the clumsiest, most intrusive vehicle of colour, line and tone. It is this weakness which controls the large Sicilian Subject—a peasant with his hens, his blue chair and his cart, a work in Mich every stroke displays not so much the Plain substance of life, but the very mechanics of picture-making. What Greaves has seen and round significant seems to be in conflict not With the grammar of a particular pictorial language, but with a set of topical orthodoxies. the means by which a certain attitude to paint- ing must in these days be conveyed. He seems lo be in the grip of a Zeitgeist and it is dis- a,PPointing to see such a talented painter so nrinly in bondage to ideas.

, The Cumberland landscapes and drawings °Y Sheila Fell, who is holding her first show in the upper gallery, reveal a very real and laipressive talent. The opening of a new gallery ';the Prospect Gallery at 11 Duke Street, St. James's—should also be noticed. It is showing a mixed exhibition of British painters, most of them already known, but including some un- familiar names. •