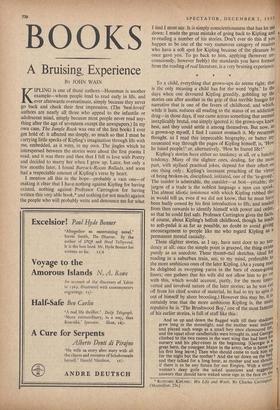 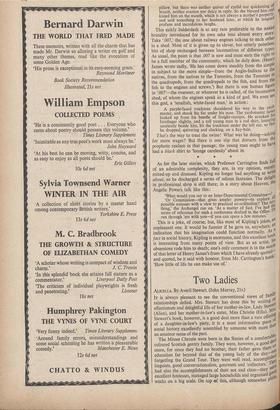 BY JOHN WAIN KIPLING is one of those authors—Housman is another . example—whom people tend to read early in life, and ever afterwards overestimate, simply because they never go back and check their first impression. (The test-loved' authors are nearly all those who appeal to the infantile or adolescent mind, simply because most people never read any- thing after the age of seventeen except the newspapers.) In my own case, The Jungle Book was one of the first books I ever got hold of; it affected me deeply, so much so that I must be carrying little specks of Kipling's imagination through life with me, embedded, as it were, in my own. The jingles which he interspersed between the stories were about the first poems I read, and it was there and then that I fell in love with Poetry and decided to marry her when I grew up. Later, but only a few months later, I found Barrack-Room Ballads, and soon had a respectable amount of Kipling's verse by heart.

I mention all this in the hope—probably a vain one—of making it clear that I have nothing against Kipling for having existed, nothing against Professor Carrington for having written this very able book,* and nothing (or not much) against the people who will probably write and denounce me for what I find I must say. It is simply conscientiousness that has let me down; I made the great mistake of going back to Kipling and re-reading a number of his stories. Don't ever do this if you happen to be one of the very numerous category of readers who have a soft spot for Kipling because of the pleasure he once gave you. To go back to him, applying (however tin' consciously, however feebly) the standards you have formed from the reading of real literature, is a very bruising experience.

To a child, everything that grown-ups do seems right; that is the only meaning a child has for the word `right.' In the days when one devoured Kipling greedily, gobbling up the stories one after another in the grip of that terrible hunger for narrative that is one of the fevers of childhood, and which, while it lasts, reduces all reading to the status of an addiction drug—in those days, if one came across something that seemed inexplicably brutal, one simply ignored it; the grown-ups knew best, and they could settle it among themselves. But now, as a grown-up myself, I find I cannot stomach it. My recurrent thought, as I read this impeccable biography, or batter MY nauseated way through the pages of Kipling himself, is, 'How he hated people!' or, alternatively, 'How he feared life!' Kipling's stories have either no tendency at all, or a hateful tendency. Many of the slighter ones, dealing, for the most part, with stylised practical jokes, depend for their effect on one thing only : Kipling's incessant preaching of the virtue, of being broken-in, disciplined, initiated, one of the 'in-group. The insider is admirable, the outsider—at best—pitiable; the jargon of a trade is the noblest language a man can speak, The almost idiotic insistence with which Kipling rubbed this in would tell us, even if we did not know, that he must have been badly cowed by his first introduction to life, and tended from then onwards to identify himself with power and order, so that he could feel safe. Professor Carrington gives the facts. of course, about Kipling's hellish childhood, though he tends to soft-pedal it- as far as possible, no doubt to avoid giving encouragement to people like me who regard Kipling as permanent mental casualty. These slighter stories, as I say, have next door to no ten' dency at all; once the simple point is grasped, the thing exists purely as an anecdote. These thumb-nail sketches, ideal for reading in a suburban train, are, to my mind, preferable to the more ambitious ones of the later Kipling. (As a young than he delighted in swopping yarns in the bars Of ocean-going liners; one gathers that his wife did not allow him to go on with this, which would account, partly, for the more intro' verted and involved nature of the later stories; as he was eat off from his chief source of material, he had to try to spin it out of himself by sheer brooding.) However this may be, it 15 certainly true that the more ambitious Kipling is, the more repulsive he is. `The Brushwood Boy,' one of the most fantous of his earlier stories, is full of stuff like this : And so up and down the flagged walk till their shadows grew long in the moonlight, and the mother went indoors and played such songs as a small boy once clamoured WI and the squat silver candlesticks were brought in, and Georgt climbed to the two rooms in the west wing that had been bl' nursery and his play-room in the beginning. [Georgie is .,a great hero, the youngest Major in the army, who is home 0.," his first long leave.] Then who should come to tuck him u? for the night but the mother? And she sat down on thene,,' and they talked for a long hour, as mother and son sho", if there is to be any future for our Empire. With a simPicei woman's deep guile she asked questions and suggeqe answers that should have waked some sign in the face on th * RUDYARD KIPLING : His Life and Work. By Charles Carringt° (Macmillan. 25s.)

pillow, but there was neither quiver of eyelid nor quickening of breath, neither evasion nor delay in reply. So she blessed him and kissed him on the mouth, which is not always a mother's property. and said something to her husband later, at which he laughed profane and incredulous laughs.

This sickly balderdash is at any rate preferable to the naked brutality introduced for its own sake into almost every story. Take `.007,' the one about railway engines talking to each other in a shed. Most of it is given up to clever, but utterly pointless, bits of shop exchanged between locomotives of different types.

As usual, the point is that .007 is new and must earn the right to be a full member of the community, which he duly does. (Henry

fish to the engines and screws.') But there is one human figure in `.007'—the overseer, or whatever he is called, of the locomotive shed, of whom the engines speak as a kind of god. We even see

this god, a 'smallish, white-faced man,' in action :

A purple-faced truckman shouldered his way to the yard' master, and shook his fist under his nose. The yard-master never looked up from his bundle of freight-receipts. He crooked his forefinger slightly, and a tall young man in a red shirt, loungog, carelessly beside him, hit the truckman under the left ear, so that he dropped, quivering and clucking, on a hay-bale.

That's the way to treat the swine! What was he doing—asking for more wages? But there is one slip that detracts from the prophetic realism in that passage; the young man ought to have had a black shirt to 'lounge carelessly' about in.

As for the later stories, which Professor Carrington finds full of an admirable complexity, they are, in my opinion, merelY mixed-up and diseased. Kipling no longer had anything to write about, so he discharged a series of odious fantasies. The delight in professional shop is still there; in a story about Heaven, the Angelic Powers talk like this: 'What would you say to an Inter-Departmental Committee--"' 'Or Commission—that gives ampler powers—to explore all possible avenues with a view to practical co-ordination? The very thing,' the Archangel ran on. 'As a matter of fact, I've had the terms of reference for such a conference drafted in the Office. '" run through 'em with you—if you can spare a few minutes.' This is a joke, of course; but, like most of Kipling's jokes, an unpleasant one. It would be funnier if he gave us, anywhere, all indication that his imagination could function normally. As .t1 fact in social history, Kipling is enormous, and this excellent boot: is interesting from many points of view. But as an artist, his obsessions rode him to death; one's only comment is in the words of that letter of Henry James's from which I have already quoted--

and quoted, be it said with honour, from Mr. Carrington's boob... 'How little of life he can make use of.'