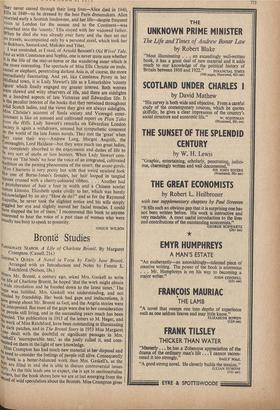 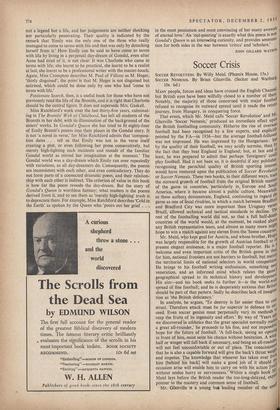 11ASSIONATE SEARCH. A Life of Charlotte BrOnte. By Margaret Crompton. (Cassell, 21s.) WHEN Mr. Bronte, a century ago, asked Mrs. Gasketl to write the life of Charlotte Brontë, he hoped 'that the work might obtain `t Wide circulation and be handed down to the latest times.' The b�iPe was fulfilled. Mrs. Gasket! was understanding, and not tided by friendship. Her book had gaps and indiscretions, it gave gossip about Mr. Bronte as fact, and the Angria stories were 40t interpreted. But most of the gaps were due to her consideration ,Or People still living, and in the succeeding years much has been 't,tvealed. The publication in 1913 of the letters to M. Heger, and the work of Miss Ratchford, have been outstanding in illuminating ;11,e dark patches, and in The Bronze Story in 1953 Miss Margaret e,`"`ille dealt with the doubtful or significant passages in Mrs. nSkell's 'incomparable text,' as she justly called it, and com- 'tented on them in the light of new knowledge. Miss Crompton has had much new material at her disposal and II() need to consider the feelings of people still alive. Consequently laps hook is a better-balanced work than Mrs. Gaskell's, as the rPs are filled in and she is able to discuss controversial issues 4111r1Y. As the title leads one to expect, she is apt to sentimentalise4!ters. but the book shows how we are at last emerging from the 'clod of wild speculation about the Brontes. Miss Crompton gives

Passionate Search, then, is a useful book for those who have not previously read the life of the Brontës, and it is right that Charlotte should be the central figure. It does not supersede Mrs. Gaskell.

Miss Ratchford's work over the last thirty-five years, culminat- ing in The Brontes' Web of Childhood, has left all students of the Brontës in her debt, with its illumination of the background of the sisters' works. In Gondal's Queen she has tried to fit eighty-four of Emily Bronte's poems into their places in the Gondal story. It is not 'a novel in verse,' for Miss Ratchford admits that 'composi- tion dates . . . tell us that Emily was not in the verse itself creating a plot, or even following her prose consecutively, but merely high-lighting such incidents and moods of the familiar Gondal world as stirred her imagination at the moment.' The Gondal world was a day-dream which Emily ran over repeatedly with variations, as all day-dreamers do. Consequently, the poems are inconsistent with each other, and even contradictory. They do not form parts of a connected dramatic poem, and their relation- ship with each other is indirect. The criterion of value in this book is how far the poem reveals the day-dream. But the story of Gondal's Queen is worthless fantasy; what matters is the poems derived from it, and to see them as 'merely high-lighting' trash is to depreciate them. For example, Miss Ratchford describes 'Cold in the Earth' as spoken by the Queen who 'pours out her grief . . .

in the most passionate and most convincing of her many avowals of eternal love.' An 'out-pouring' is exactly what this poem is not. Condors Queen is an interesting curiosity, and provides ammoill' Lion for both sides in the war between 'critics' and 'scholars.'