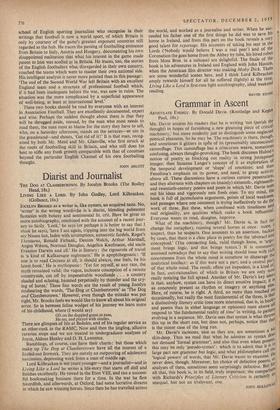 MR. DAVIE assures his readers that he is writing 'not (perish the thought) in hopes of furnishing a new gleaming piece of critical machinery,' but more modestly just to distinguish some neglected poetical pleasures. So he may be. The machinery is there, though. and sometimes it glitters in spite of its (presumably unconscious) camouflage. This camouflage has a criss-cross weave, sometimes confusing, always thought-provoking. The book discusses Hulme's notion of poetry as blocking out reality in strong juxtaposed images; then Susanne Langer's concept of it as exploration of the temporal development or 'shape' of emotions; and then Fenollosa's emphasis on its power, and need, to grasp activity above all. These discussions have a curious cursive penetration, and they alternate with chapters on (mainly) sixteenth-, eighteenth- and twentieth-century poems and poets in which Mr. Davie testa out his ideas and vigorously nets fresh ones. To my mind, the book is full of inconclusive arguments, points of local weakness, and passages where one comment is trying ineffectively to do the work of three. But these, when combined with timeliness and real originality, arc qualities which make a book influential. Everyone wants to read, disagree, improve. What of the machinery, though? Mr. Davie is, in fact (to change the metaphor), running several horses at once: more, suspect, than he suspects. One amounts to an assertion, backed by cases, that there is a clear place in poetry for the 'abstract and conceptual.' (The connecting link, valid though loose, is 'argil" ment brings logic, and this brings syntax.') It is commonly assumed nowadays that to say that writing should issue with rich concreteness from the whole mind is somehow to disparage the analytical intellect : as if this were not a part, and a central part' of that whole mind. The result, effete yet impudent, is a kind °I' in fact, anti-rationalism of which in Britain we are only noW really noticing the full spread. Another of Mr. Davie's key ideas is that, anyhow, syntax can have its direct emotive impact; it it as concretely present as rhythm or imagery or anything else' Here, of course, he is right. A third, no more than touched en occasionally, but really the most fundamental of the three, is that a distinctively literary critic (one more interested, that is, in books and poems than in either language or opinions) must above 311 respond to 'the fundamental reality of time' in writing, to pattern evolving in a sequence. Mr. Davie sees that syntax is what throo's this up in the short run, but does not, perhaps, notice that that is the minor case of the long run. Mr. Davie's incisions, nice as they are, are sometimes a bit skin-deep. Thus we read that what he admires as syntax does not demand 'formal grammar'; and also that even when present. this may be only 'pseudo-syntax' : which is to, admit that it is in large part not grammar but logic, and what philosophers call the 'logical powers' of words, that Mr. Davie wants to examine. Pc, never does, though. Moreover, his choice of defective poems, or' analyses of them, sometimes seem surprisingly defective. But f° all that, this book is, in its field, truly important; the comparisd,,