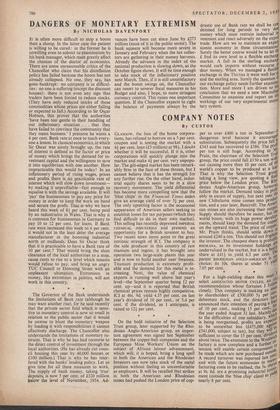 GLASGOW, the lion of the home corpora- tions, has refused to borrow on a 5 per cent. coupon and is testing the market with a 41 per cent. loan (£5 million) at 98{. I doubt whether it will be successful. If it is, other corporations will quickly plunge into the market and make 4.1 per cent. very unpopu- lar. The gilt-edged market has been remark- ably firm in the face of these threats, but I cannot believe that it has the strength for any further rise. On the other hand, indus- trial equity shares seem to be in a slow recovery movement. The yield differential has become more compelling now that the 'blue chips' in the Financial Times index give an average yield of over 5+ per cent. The only upsetting factor is the occasional appearance of American sellers seeking to establish losses for tax purposes (which they find difficult to do in their own market). This selling has recently depressed IMPERIAL CHEMICAL INDUSTRIES and presents an opportunity for a British investor to buy. Two recent news items point to the great intrinsic strength of ICI. The company is the sole producer in this country of raw titanium and ingots; it has brought into operation two large-scale plants this year and is now to build another near Swansea. Titanium production is extremely profit- able and the demand for this metal is in- creasing. Next, the value of chemical exports is running well above last year's level—the September quarter being 12 per cent. up—and it is reported that British chemical prices remain highly competitive. ICI at 46s. 9d. yield 4.35 per cent. on last year's dividend of 10 per cent., or 5.4 per cent. if the dividend, as 1 anticipate, is raised to 121 per cent.

On the bold initiative of the Selection Trust group, later supported by the Rho- desian Anglo-American group, an impor- tant agreement was signed last September between the copper-belt companies and the European Mine Workers' Union on the subject of African labour advancement, which will, it is hoped, bring a long spell in both the American and the Rhodesian Investors can now take stock of the metal position without feeling so uncomfortable as employers. It will be recalled that strikes in both the American and Rhodesian mines had pushed the London price of cop- per to over £400 a ton in September-4 dangerous level because it encouraged substitution. Subsequently the price fell £343 and has recovered to .£386. The Pr°6I

M per ton is still huge. According to r.

Prain, the chairman of the Selection TrL group, the price could fall £150 a ton With out causing more than 10 per cent. of the world's copper to be produced at a loss That is why the Selection Trust grafi' taking a long view, are quoting a fixeod

price below the London price. The Rh desian Anglo-American group, however follow the market. Demand today is Pr°b. ably in excess of supply, but next year 111c new Chibuluma mine comes into pr OCI°:

tion, and a year later, Bancroft. The Am can mines are also increasing their ot tO1' Supply should therefore be easier, but the world boom, with its huge power devel°P. ments, should keep the demand for copper on the upward trend. The price of copPe

t n a Mr. Prain thinks, should settle dov4. around £240 a ton. This should not fra hte- the investor. The cheapest share is pro' ablY

RHOKANA, as its investment holdingsvy undervalued in the market, but it is a share at £4l+ to yield 6.3 per cent: 1Thd parent RHODESIAN ANGLO-AMERICAN Is /11Y choice; its 10s. shares at under 54 Yield 7.05 per cent.

For a high-yielding share this wea 1I select ASSOCIATED MOTOR CYCLES,a„ " recommendation whose fortunes I fc11° closely. This company is making an .5aLje to shareholders of £500,000 5+ per ell. debenture stock, and the directors have 601 announced their intention of paying a for of 10 per cent., making 15 per cent., the year ended August 31 last. Mainly due 1101 to the difficulties of one subsidiary, ft is being reorganised, profits are expect te- to be somewhat less (£475,000 Wipe be £541,000, subject to tax), but they y,1 A sufficient to cover the 15 per cent. divide% about twice. The extension to the Woo. WO' factory is now complete and a furthalseN. to tension will enable certain componeniside. be made which are now purchased out r A record turnover was reported last e. maresWO' maresand with the future economies in ,a' facturing costs to be realised, the 55. a`, at 9s. 6d. are a promising industrial n Vest

I merit (outside the 'blue chip' class) to ei nearly 8 per cent.