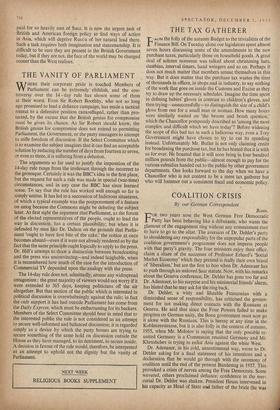 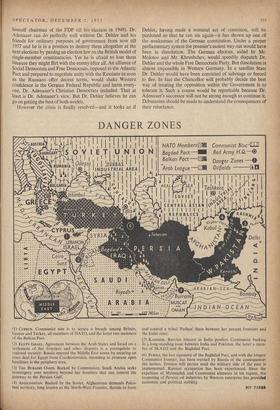 By our German Correspondent Bonn. E1OR two years now the West German Free Democratic r Party has been behaving like a debutante, who wants the glamour of the engagement ring without any commitment ever to have to go to the altar. The aversion of Dr. Dehler's party to shouldering any responsibility for the unpopular parts of the coalition government's programme does not impress people with that party's gravity. The four ministers enjoy their office, claim a share of the successes of Professor Erhard's 'Social Market Economy' which they pretend is really their own brand of 'liberalism,' but are the first to boo when Dr. Adenauer has to push through an unloved Saar statute. Now, with his remarks about the Geneva conference, Dr. Dehler has gone too far and Dr. Adenauer, to his surprise and his ministerial friends' alarm, has hinted thathe may ask for the ring back.

Dr. Dehler, a witty and likeable Franconian with a diminished sense of responsibility, has criticised the govern- ment for not making direct contacts with the Russians at Geneva. He said that since the Four Powers failed to make progress on German unity, the Bonn government must now go it alone with the Russians. This is heresy at any time in the Koblenzerstrasse, but it is also folly in the context of autumn, 1955, when Mr. Molotov is saying that the only possible re- united Germany is a Communist reunited Germany and Mi. Khrushchev is trying to enlist Asia against the white West.

Dr. Adenauer, in his cold, unsentimental way, wrote to Dr. Dehler asking for a final statement of his intentions and a declaration that he would go through with the ceremony of coalition until the end of the present Bundestag in 1957. This provoked a crisis of nerves among the Free Democrats. Some wavered, others proclaimed defiance; confidence in the mer- curial Dr. Dehler was shaken. President Heuss intervened in his capacity as Head of State and father of the bride (he was himself chairman of the FDP till his election in 1949). Dr. Adenauer can do perfectly well without Dr. Dehler and his friends for ordinary purposes of government from now till 1957 and he is in a position to destroy them altogether at the next elections by passing an election law on the British model of single-member constituencies. Yet he is afraid to lose them because they might flirt with the enemy after all. An alliance of Social Democrats and Free Democrats, opposed to the Atlantic Pact and prepared to negotiate unity with the Russians as soon as the Russians offer decent terms, would shake Western confidence in the German Federal Republic and harm every- one, Dr. Adenauer's Christian Democrats included. That at least is Dr. Adenauer's view. But Dr. Dehler believes he can go on getting the best of both worlds.

However the crisis is finally resolved—and it looks as if Dehler, having made a nominal act of contrition, will he pardoned so that he can sin again—it has shown up one of the weaknesses of the German constitution. Under a proper parliamentary system the premier's easiest way out would have been in dissolution. The German electors, aided by Mr. Molotov and Mr. Khrushchev, would speedily dispatch Dr. Dehler and the whole Free Democratic Party. But dissolution is almost impossible in Western Germany. In a satellite State Dr. Dehler would have been convicted of sabotage or forced to flee. In fact the Chancellor will probably decide the best way of treating the opposition within the-Government is to tolerate it. Such a course would be regrettable because Dr. Adenauer's successor will not be strong enough to continue it. Debutantes should be made to understand the consequences of their reluctance.

(I) CYPRUS. Communist aim is to secure a breach among Britain, Greece and Turkey, all members of NATO, and the latter two members of the Balkan Pact.

(2) EGYPT-ISRAEL. Agreement between the Arab States and Israel on a settlement of her frontiers and other disputes is a prerequisite to regional security. Russia entered the Middle East arena by securing an .arms deal for Egypt from Czechoslovakia, intending to promote open hostilities in the periphery area.

(3) THE BURAIMI °As's. Backed by Communists, Saudi Arabia seeks sovereignty over territory beyond her frontiers that can control the gateway to the Persian GLIM (4) AFGHANISTAN. Backed by the Soviet, Afghanistan demands Pakis- tani territory, long known as the North-West Frontier, therein to form

and control a tribal 'Pathan' State between her present frontiers and the Indus river.

(5) KASHMIR. Russian interest in India predicts Communist hacking in a long-standing issue between India and Pakistan, the latter a mem- ber of SEATO and the Baghdad Pact.

(6) PERSIA, the last signatory of the Baghdad Pact, and with the longest Communist frontier, has been warned by Russia of the consequences she invites. Tension will persist until the military side of the pact is implemented. Russian occupation has been experienced. Since the expulsion of Moussadek and Communist elements in his regime, the reopening of Persian oil industries by Western enterprise has provided economic and political stability.