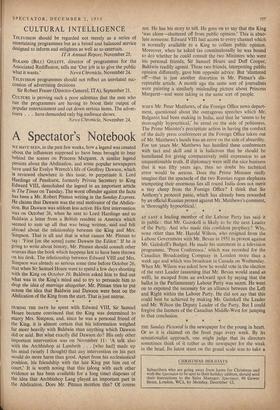 Page 7, 2 December 1955 — AT LAST a leading member of the Labour Party has
Close

AT LAST a leading member of the Labour Party has

said it in public : that Mr. Gaitskell is likely to be the next Leader of the Party. And who made this confident prophecy? Why, none other than Mr. Harold Wilson, who resigned from the Labour Government with Mr. Bevan in 1951 in protest against Mr. Gaitskell's Budget. He made his statement in a television programme, 'Press Conference.' which was recorded for the Canadian Broadcasting Company in London more than a week ago and which was broadcast in Canada on Wednesday. When Mr. Wilson was asked how he would vote in the election of the next Leader (assuming that Mr. Bevan would stand as well), he escaped from an awkward spot by saying that the ballot in the Parliamentary Labour Party was secret. He went on to expound the necessity for an alliance between the Left and Right within the Labour Party. He did not say that this could best be achieved by making Mr. Gaitskell the Leader and Mr. Wilson the Deputy Leader of the Party. But I could forgive the farmers of the Canadian Middle-West for jumping to that conclusion.