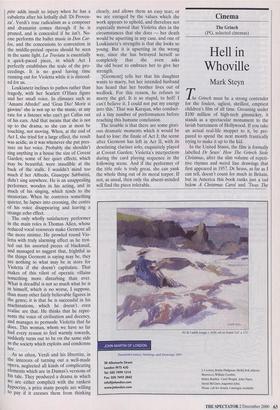 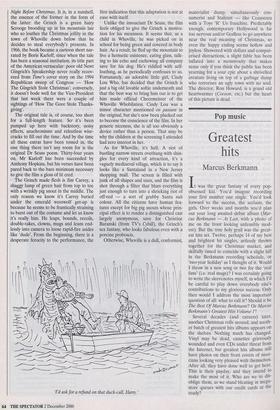 he Grinch must be a strong contender for the foulest, ugliest, shrillest, emptiest children's film of all time. Groaning under $100 million of high-tech gimmickry, it stands as a spectacular monument to the lavish barrenness of Hollywood. If you take an actual real-life moppet to it, be pre- pared to spend the next month frantically trying to make it up to the kid.

In the United States, the film is formally labelled Dr Seuss' How The Grinch Stole Christmas, after the slim volume of repeti- tive rhymes and weird line drawings that first appeared in 1957. Dr Seuss, as far as I can tell, doesn't count for much in Britain, but in America this book ranks just a tad below A Christmas Carol and 'Twas The Night Before Christmas. It is, in a nutshell, the essence of the former in the form of the latter: the Grinch is a green hairy Scrooge brooding up in his mountain lair who so loathes the Christmas jollity in the town of Whoville down below that he decides to steal everybody's presents. In 1966, the book became a cartoon short nar- rated by Boris Karloff, since when the tale has been a seasonal institution, its title part of the American vernacular: poor old Newt Gingrich's Speakership never really recov- ered from Time's cover story on the 1994 Republican sweep of Congress — 'How The Gingrich Stole Christmas'; conversely, it doesn't bode well for the Vice-President that last week there were a couple of sightings of 'How The Gore Stole Thanks- giving'.

The original tale is, of course, too short for a full-length feature. So- it's been pumped up here with backstory, noisy effects, anachronisms and relentless wise- cracks to fill out the time. And by the time all these extras have been tossed in, the one thing there isn't any room for is the original Dr Seuss poem. Thirty-four years on, Mr Karloff has been succeeded by Anthony Hopkins, but his verses have been pared back to the bare minimum necessary to give the film a gloss of lit cred.

The Grinch made flesh is Jim Carrey, a shaggy lump of green hair from top to toe with a wrinldy pig snout in the middle. The only reason we know it's Carrey buried under the emerald werewolf get-up is because he seems to be frantically straining to burst out of the costume and let us know it's really him. He leaps, bounds, recoils, double-takes, clowns, mugs and leans end- lessly into camera to loose rapid-fire asides like 'dude'. From the beginning, there is a desperate ferocity to the performance, the first indication that this adaptation is not at ease with itself.

Unlike the insouciant Dr Seuss, the film feels obliged to give the Grinch a motiva- tion for his meanness. It seems that, as a child in Whoville, he was picked on in school for being green and covered in body hair. As a result, he fled up the mountain to live a hermetic existence, eating glass, talk- ing to his echo and eschewing all company save for his dog. He's riddled with self- loathing, as he periodically confesses to us. Fortunately, an adorable little girl, Cindy Lou Who, has decided that the Grinch is just a big old lovable softie underneath and that the best way to bring him out is to get him made official Cheermeister of the Whoville Whobilation. Cindy Lou was a minor character mentioned en passant in the original, but she's now been plucked out to become the conscience of the film. In her generic niceness, she is all too obviously a device rather than a person. That may be why the children at the screening I attended had zero interest in her.

As for Whoville, it's hell. A riot of bustling narrow streets overhung with shin- gles for every kind of attraction, it's a vaguely mediaeval village, which is to say it looks like a Santaland in a New Jersey shopping mall. The screen is filled with junk of all shapes and sizes, and the film is shot through a filter that blurs everything just enough to turn into a shrieking riot of off-red — a sort of grubby Santa suit colour. All the citizens have human fea- tures except for big pig snouts whose prin- cipal effect is to render a distinguished cast largely anonymous, save for Christine Baransld (from TV's Cybill), the Grinch's sex fantasy, who looks fabulous even with a porcine proboscis.

Otherwise, Whoville is a dull, conformist, materialist dump, simultaneously con- sumerist and Stalinist — like Ceausescu with a Toys 'R' Us franchise. Predictably enough, contemporary Hollywood is far too nervous and/or Godless to go anywhere near the real meaning of Christmas, so even the happy ending seems hollow and joyless. Showered with dollars and comput- erised distractions, a slight fable has been inflated into a monstrosity that makes sense only if you think the public has been yearning for a sour epic about a shrivelled creature living on top of a garbage dump who terrorises an ugly town with no soul. The director, Ron Howard, is a grand old heartwarmer (Cocoon, etc.) but the heart of this picture is dead.