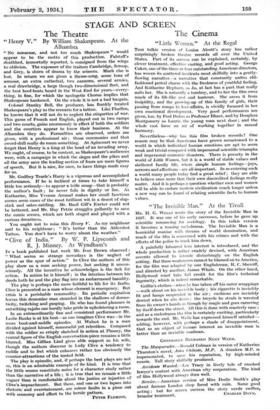 "The Invisible Man." At the Tivoli

Mu. H. G. WELLS wrote the story of the Invisible Man in 1897. It was one of his early successes, before he gave up scientific romancing for sociology. In this talkie version it becomes a rousing melodrama. The Invisible Man is a homicidal maniac with dreams of world domination, and much of the film is concerned with his crimes and with the efforts of the police to track him down.

. A painfully laboured love interest is introduced, and the whole production is rather crudely devised, with American accents allowed to intrude disturbingly on the English setting. But these weaknesses cannot be blamed on to America, for the film was adapted by one Englishman, R. C. Sherrill, and directed by another, James Whale. On the other hand, Hollywood must take full credit for the film's technical ingenuity, which is indeed remarkable.

Griffin's clothes—when he has taken off his outer wrappings —walk about on his invisible body ; his cigarette is invisibly lit and hangs suspended in the air ; cushions are invisibly dented when he sits down ; the bicycle he steals is wrested from its owner's hands as though by magic and goes careering by itself down the street. All this is done with masterly case; and as a melodrama the film is certainly exciting, particularly towards the end. Mr. Wells has expressed himself satisfied— adding, however, with perhaps a shade of disappointment, that as an object of human interest an invisible man is better than an invisible madman.