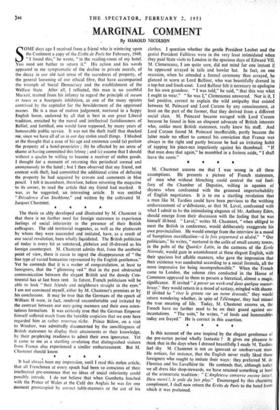 SOME days ago I received from a friend who is wintering upon the Continent a copy of the Ecrits de Paris for February, 1949. " I found this," he wrote, " in the reading-room of my hotel. You need not bother to return it." His action and his words appeared to me symptomatic of the decline in private morals, of the decay in our old taut sense of the sacredness of property, of the general loosening of our ethical fibre, that have accompanied the triumph of Social Democracy and the establishment of the Welfare State. After all, I reflected, this man is no youthful Marxist, trained from his infancy to regard the principle of meurn et mum as a bourgeois inhibition, as one of the many opiates contrived by the capitalist for the bewilderment of the oppressed masses. He is a man of mature judgement, nurtured in a happy English home, endowed by all that is best in our great Liberal tradition, enriched by the moral and intellectual fastidiousness of Balliol, and fortified, one would have supposed, by many years of honourable public service. It was not the theft itself that shocked me, since we have all of us in our day stolen small things. I blushed at the thought that a man of his age and eminence could (a) purloin the property of a hotel-proprietor ; (b) be affected by no sense of shame at having committed this felony ; and (c) assume that I should without a qualm be willing to become a receiver of stolen goods. I thought for a moment of returning this periodical unread and anonymously to the hotel ; but I then observed that my friend, not content with theft, had committed the additional crime of defacing the property he had acquired by crosses and comments in blue pencil. I felt it incumbent, therefore, before returning the magazine to its owner, to read the article that my friend had marked. It was, as he suggested, an interesting article. It was entitled " Decadence dun Snobisme," and written by the cultivated M. Jacques Chastenet.

* * * * The thesis so ably developed and illustrated by M. Chastenet is that there is no further need for foreign statesmen to experience feelings of social inferiority in the presence of their British colleagues. The old territorial magnates, as well as the plutocrats by whom they were succeeded and imitated, have, as a result of our social revolution, been wholly liquidated. The British politician of today is every bit as untutored, plebeian and ill-dressed as his foreign counterpart. M. Chastenet admits that, from the aesthetic point of view, there is cause to regret the disappearance of " the fine type of varied humanism represented by the English gentleman." Yet he contends that it is a matter of congratulation, at least to foreigners, that the " glistening veil " that in the past obstructed communication between the elegant British and the dowdy Con- tinental has at last been rent. In future, French politicians will be able to look " their friends and neighbours straight in the eyes." I am not convinced myself, either by M. Chastenet's premises or by his conclusions. It may be true that the Germans of the epoch of William II were, in fact, rendered uncomfortable and irritated by the contrast between our easy-going manners and their own osten- tatious formalism. It was certainly true that the German Emperor himself suffered much from the horrible suspicion that we over here regarded him as rather nouveau riche. Prince Billow, on a visit to Windsor, was admittedly disconcerted by the unwillingness of British statesmen to display their attainments or their knowledge, by their perplexing readiness to admit their own ignorance. Yet it came to me as a startling revelation that distinguished visitors from France also experienced a similar embarrassment. But M. Chastenet should know.

* * * * It had always been my impression, until I read this stolen article, that all Frenchmen at every epoch had been so conscious of their intellectual pre-eminence that no ideas of social inferiority could possibly intrude. I do not believe that when Gambetta lunched with the Prince of Wales at the Cafe des Anglais he was for one moment preoccupied by correct table-manners or the cut of his clothes. I question whether the gentle President Loubet and the genial President Falliercs were in the very least intimidated when they paid State visits to London in the spacious days of Edward VII. M. Clemenceau, I am quite sure, did not mind for one instant if he appeared arrayed in tails and bowler hat. In fact, on one occasion, when he attended a formal ceremony thus arrayed, he glanced in scorn at Lord Balfour, who was beautifully dressed in a top-hat and frock-coat. Lord Balfour felt it necessary to apologise for his own grandeur. " I was told," he said, " that this was what I ought to wear." "So was I," Clemenceau answered. Nor is it, I feel positive, correct to explain the wild antipathy that existed between M. Poincare and Lord Curzon by any consciousness, at least on the part of the former, that they derived from a different social class. M. Poincare became enraged with Lord Curzon because he found in him an eloquent advocate of British interests who, unlike most British statesmen, really knew his stuff. And Lord Curzon found M. Poincare insufferable, partly because the latter made no effort to conceal his conviction that France was always in the right and partly because he had an irritating habit of tapping his pince-ncz impatiently against his thumbnail. " If that man dots that again," he mumbled in a furious aside, " I shall leave the room."

M. Chastenet assures me that I was wrong in all these assumptions. He presents a picture of French statesmen, of men who without blenching could control the red fool- fury of the Chamber of Deputies, wilting in agonies of shyness when confronted with the groomed imperturbability of English negotiators. It is to me a startling revelation that a man like M. Tardieu could have been pervious to the writhing embarrassment of a•debutante, or that M. Laval, confronted with what I admit to be the intimidating elegance of Mr. Anthony Eden, should emerge from their discussion with the feeling that he was himself ill-bred. " Laval," writes M. Chastenet, " when obliged to meet the British in conference, would deliberately exaggerate his own provincialism. He would emerge from the interview in a mood of bumptious mortification—a la fois goguenard et ulcere." "Our politicians," he writes, " nurtured in the cafes of small county towns, in the pubs of the Quartier Latin, in the canteens of the Ecok Normale, would gaze in astonishment at these elegant English, with their spacious but affable manners, who gave the impression that their existence was conducted according to a social formula, all the more impressive for being incomprehensible." When the French came to London, the solemn rites conducted in the House of Commons appeared to them to possess a hieratical, almost a magic, significance. If invited " a passer un week-end dans quelque manor- house," they would return in a mood of ecstasy, mingled with shame. If invited to " firer le grouse sur un moor ecossais," they would return wondering whether, in spite of Telemaque, they had missed the true meaning of life. Today, M. Chastenet assures us, the French have no further need to be on their guard against out incantations. " The suits," he writes, " of lords and honourablcs today are frayed." He is correct in this assertion.

Is this account of the awe inspired by the elegant gentleman of the pre-surtax period wholly fantastic ? It gives me pleasure to think that in the days when I dressed beautifully I made M. Tardier: feel shy M. Chastenet is not an ignorant or unobservant man. He notices, for instance, that the English never really liked those foreigners who sought to imitate their ways: they preferred M. de Fleuriau and his Lavalliere tie. He contends that, although today we all dress like shop-stewards, we have retained something at least of the aristocratic tradition: " L'Angleierre conserve encore intact. Dieu merci le gotlt du fair play." Encouraged by this charming compliment, I shall now return the Ecrits de Paris to the hotel from which it was purloined.