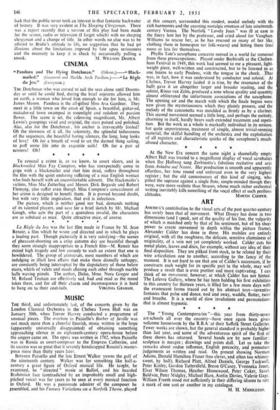 THE Dutchman who was cursed to sail the seas alone until Dooms- day or until he could find, during the brief sojourns allowed him on earth, a woman who loved him enough to die for him, is Mr. James Mason. Pandora is the all-gifted Miss Ava Gardner. They meet in a little town on the coast of Spain, a beautiful, guitar-ed, matador-ed town swamped in moonlight and redolent of passion flower. The scene is set, the colouring magnificent, Mr. Albert Lewin's groupings vivid and original, the stars poised and polished. Alas, alas for the Dutchman , his anchor is irrevocably fouled! Oh the slowness of it all, the solemnity, the splendid tediousness of the sequences, the beautiful boring silences, the long, long looks of love! Oh for a breath of wind to set the darned thing sailing, to puff some life into its exquisite sails! Oh for a pair of scissors! Oh!

To conceal a crime is, as we know, to court ulcers, and in Blackmailed Miss Fay Compton, who has unexpectedly come to grips with a blackmailer and shot him dead, suffers throughout the film with the quiet enduring suffering of a nice English woman who finds herself with an uncomfortable ailment. The blackmailer's victims, Miss Mai Zetterling and Messrs. Dirk Bogardc and Robert Flemyng, also suffer even though Miss Compton's concealment of her crime is designed to benefit them. It is proved beyond doubt, but with very little inspiration, that evil is infectious. The picture, which is neither good nor bad, demands nothing of its talented players, and save for a brief sketch by Mr. Michael Gough, who acts the part of a querulous invalid, the characters are as subdued as mice. Quite attractive mice, of course.

La Regle du Jeu was the last film made in France by M. Jean Renoir, a film which he wrote and directed and in which he plays a leading part. Though pictorially it is very satisfying—the scenes of pheasant-shooting on a crisp autumn day are beautiful though they seem strangly inappropriate to a French film—M. Renoir has mixed high tragedy and low comedy.to such an extent that one is bewildered. The group of aristocrats, most members of which are indulging in illicit love affairs that make them dismally unhappy, are constantly being interrupted by the slapstickery of those below stairs, whirls of valets and maids chasing each other through marble halls waving pistols. The author, Dalio, Mme. Nora Gregor and M. Roland Toutain are effectively sad, bad and mad as the mood takes them, and for all their charm and inconsequence it is hard