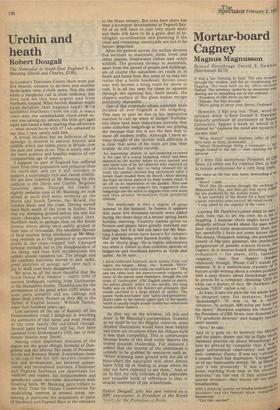 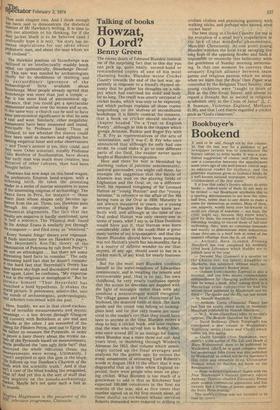 Beyond Stonehenge Gerald S. Hawkin5 (Hutchinson 0.75) It was a hot morning in June. The sun streamed through the window, and the air conditioning Wde flagging. The neon bulb on my office intercom flashed. The secretary spoke in an unnatural Ole. alerting me to something out of the ordinary.

"President of CBS News on the line."

"Thanks. Put him through." "We're going to prove your theory, Professor.''

Honestly, I kid you not. That, word for stricken word, is how Gerald S. Hawkins, formerly professor of astronomy at Boston University, begins a book in which it isf claimed he "explores the mind and mysterY ancient man".

"What theory?" replied Hawkins (after all there have been so many presumably ...) "About Stonehenge being a computer — that temple locked to the sun — man reaching for the universe ..."

(If I were that anonymous President of tC135 News, I'd either sue for criminal libel, or OP° to remain anonymous for a very long time). The voice on the line was there, demanding re5' ponse.

"We'll film the sunrise through the archwY 011 Midsummer's Day, and then get that moon ec■iPse' the one predicted by the Aubrey holes."

A fair summary of the theory for a busy head of a hectic television news service. My mind raced • • ' I was jolted by the urgency of the voice . . •

Leaving Mr Hawkins's jolted mind to race', took time out to let my own do a bit 0' boggling. I suppose there might have beehl/ allegedly serious books about the past whic,'' have started more preposterously than the' but mercifully I have not come across the The sleazy, cheapjack writing, the pretentious, veneer of big-time glamour, the intellectual gangsterism of pseudo science fiction, iiicet Cagney in a mortar-board drivelling ab°Ijs computers — for sheer, silly, (asteles, vulgarity, that first chapter (headoth ominously enough, 'Phone Call') stands Pr„e' eminent. It is a meretricious travesty of Vr feature script-writing about a cookie profess% with a zany theory about Stonehenge he proves by a computer, shouting QED tP. while (as a matter of fact, Mr Hawkins doe' exclaim "QED" rather a lot . . .). At least, it sets the style for the whole boni(d. In chapter two for instance, headeise 'Stonehenge': "It was to be a sunr,0 semester, by astrojet, 600 miles per hour in`o the dawn." Hawkins explains his 'theory' to the President of CBS News, now demoted to 'TV producer-director' and happily becorn` more laconic: "Give," he said. rf 'nis And so it goes on. In between the Ma•e, and the plastic dinner and the in-flight ni""fid Hawkins prattles on about Stonehenge 3 how he proved by computer that it Wahsis, giant astronomical observatory and Pr,eor' tonic computer (funny, if you say 'calcula`, i5 it sounds much less impressive. 'ComPutekros on of our fashionable words). Or, as Igo"' ir puts it less prosaically "It was a poernrl . a stone, reaching from man to the revolvif, heavens." At the end of this alliteratill4 sunrise semester, they bound off the Pia" breakfastless. With a three-car convoy we headed immediatelYefo°1; Salisbury and the famous plain. Assign"' Stonehenge.

"Get that sunrise!" Thus ends chapter two. And I think enough has been said to demonstrate the diabolical Manner of Mr Hawkins's writing. It is time to turn our attention to his thinking, for if the dust jacket blurb is to be believed (and I Profoundly hope it is not), "his story has immense implications for our ideas about Prehistoric man, and about the man whom we Call civilised ".

The Hawkins position on Stonehenge was outlined in an intellectually muddy book called, too optimistically, Stonehenge Decoded. This epic was mauled by archaeologists Chiefly for its shoddiness of thinking and its extraordinary ignorance of the archaeological facts available about Stonehenge. Most people already agreed that Stonehenge was more than just a temple — that it has some kind of astronomical significance, that you could get a spectacular midsummer sunrise over the stones and so on. Inn the same way, a church can be said to have :knne astronomical significance in that its axis IS east and west. Similarly, other megalithic monuments have been measured and tested, Principally by Professor Sandy Thom of Scotland, to see whether the stones could have been used as markers and sighters for Making empirical lunar and solar observations

— and Thom's answer is yes, they could, and they were. Other scientists, notably Professor

Cohn Renfrew of Southampton, have shown that early man was much more creative, less irnitative of other cultures, than had been thought before.

Hawkins has now leapt on this band-wagon, the prehistoric Einstein band-wagon, with a sickening lurch. He takes the protesting reader in a series of sunrise semesters to some of the interesting enigmas of archaeology. The Nasca lines in Peru, for instance — these desert lines whose shapes only become apParent from the air. These, too, Hawkins puts through his computer, looking for astronomical alignments. The fact that the r,esults are negative is hardly mentioned, save in half a sentence. The Thaistos disk' found ,_bY Sir Arthur Evans is similarly put through his computer — and filed away as "unsolved." Every 'lunatic fringe' theory ever expound1 finds sanctuary here on Hawkins's pages. thor Heyerdahl's Kon-Tiki theory of the colonisation of Polynesia by raft from Peru? "I ,4r1 not an ethnologist ... but there are some ulteresting hard facts to consider." The only interesting hard fact that he doesn't consider • the hard fact that Heyerdahl's theory has 'ten blown sky-high and discredited over and °v• er again. Later, he confesses, "My expertise not in the religious or metaphysical." But he permits himself "Thor Heyerdahl has clinched a bold hypothesis. It shakes the vv, orld picture. It penetrates, stiletto-like, into the minds of archaeologists, anthropologists, and scholars concerned with the past. . . ." , Here, frankly, we are in that cloud-cuckoo'end of invisible measurements and mystic meanings — a line driven through Glasgow vsd,,11 connect with Bethlehem at one end and Valhalla at the other. I am reminded of the toUng Sir Flinders Petrie, sent out to Egypt by 1!s father to measure the Pyramids, in order prove a zany theory about the mystic na hltMe of the Pyramids based on measurements.

retrie produced the "one ugly little fact" that

destroyed the whole ridiculous thesis: the measurements were wrong. Ultimately, I Wasn't surprised to spot this gem in the blurb: :Ie follows up von Daniken's Chariots of the c'fls with the scientific truth." And if that ,..'4,i't a case of the blind leading the misguided,

'oat is? And yet this is the sort of stuff that

sells mightily on the pseudo-archaeology rtrilarket. Maybe he's not quite such a fool as

.140 hrynus Magnusson is the presenter of the '15C television programme, Chronicle.