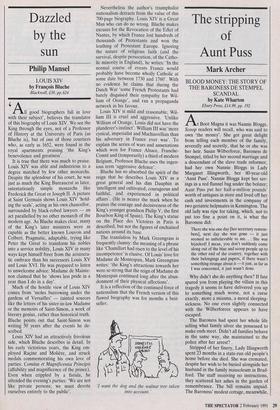 Dazzled by the sun

All good biographers fall in love with their subject', believes the translator of this biography of Louis XIV. We see the King through the eyes, not of a Professor of History at the University of Paris (as Bluche is), but of one of those courtiers who, as early as 1652, were found in the royal apartments praising 'the King's benevolence and greatness'.

It is true that there was much to praise. Louis XIV was able and industrious to a degree matched by few other monarchs. Despite the splendour of his court, he was just as much the King Bureaucrat as later, ostentatiously simple monarchs like Frederick the Great or Joseph II. A picture at Saint Germain shows Louis XIV 'hold- ing the seals', acting as his own chancellor, surrounded by black-robed lawyers — an act parallelled by no other monarch of the modem age. As Bluche makes clear, many of the King's later ministers were as capable as the better known Louvois and Colbert. Pragmatic, adaptable, trying like Peter the Great to transform his nobles into a service nobility, Louis XIV in many ways kept himself freer from the aristocra- tic embrace than his successors Louis XV and Louis XVI. He was prepared to listen to unwelcome advice: Madame de Mainte- non claimed that he 'shows less pride in a year than I do in a day'.

Much of the hostile view of Louis XIV comes from 'moles burrowing under the gardens of Versailles' — tainted sources like the letters of his sister-in-law Madame or the memoirs of Saint-Simon, a work of literary genius, rather than historical truth. Bluche points out that Saint-Simon was writing 50 years after the events he de- scribed.

Louis XIV had an attractively frivolous side, which Bluche describes in detail. In his early victorious years, the King em- ployed Racine and Moliere, and struck medals commemorating his own love of parties: Comitas et Magnificentia Principis (affability and magnificence of the prince). Even when crippled by a fistula, he attended the evening's parties: 'We are not like private persons; we must devote ourselves entirely to the public'. Nevertheless the author's triumphalist nationalism detracts from the value of this 700-page biography. Louis XIV is a Great Man who can do no wrong. Bluche makes excuses for the Revocation of the Edict of Nantes, by which France lost hundreds of thousands of Protestants and won the loathing of Protestant Europe. Ignoring the nature of religious faith (and the survival, despite persecution, of the Catho- lic minority in England), he writes: 'In the normal course of events France would probably have become wholly Catholic at some date between 1730 and 1760'. With no evidence he claims that during the Dutch War 'some French Protestants had barely disguised their sympathy for Wil- liam of Orange', and ran a propaganda network in his favour.

Louis XIV is mild and reasonable; Wil- liam III is cruel and aggressive. 'Unlike William of Orange, Louis did not have the plunderer's instinct'. William III was 'more cynical, imperialist and Machiavellian than his adversary in France ever was'. To explain the series of wars and annexations which won for France Alsace, Franche- Comte and (temporarily) a third of modern Belgium, Professor Bluche uses the ingen- ious term 'aggressive defence'.

Bluche has so absorbed the spirit of the reign that he describes Louis XIV as a great general and his dim Dauphin as `intelligent and cultivated, courageous and faithful, and experienced in political affairs'. (He is nearer the mark when he praises the courage and decisiveness of the King's younger grandson Philip V, the first Bourbon King of Spain). The King's statue on the Place des Victoires in Paris is described, but not the figures of enchained nations around its base.

The translation by Mark Greengrass is frequently clumsy: the meaning of a phrase like `Chamillart had risen to the level of his incompetence' is elusive. Of Louis' love for Madame de Montespan, Mark Greengrass writes: 'the King's attractions towards her were so strong that the reign of Madame de Montespan continued long after the aban- donment of their physical affections'.

It is a reflection of the continued force of nationalism that the French version of this flawed biography was for months a best- seller.

'I want the dog and the walnut tree taken into account.'