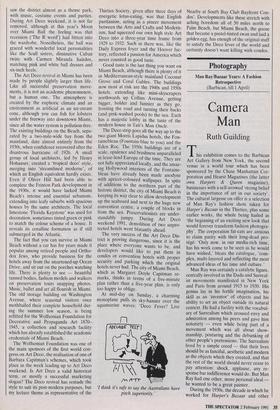 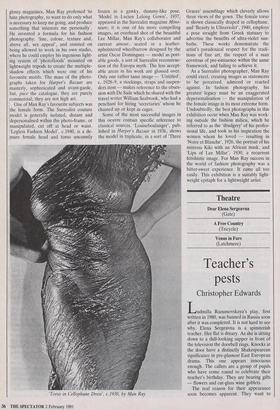 This exhibition comes to the Barbican Art Gallery from New York, the second venue in a world tour which has been sponsored by the Chase Manhattan Cor- poration and Hearst Magazines (the latter , own Harpers & Queen magazine), businesses with a self-avowed 'strong belief in the importance of art in our society'. The cultural largesse on offer is a selection of Man Ray's fashion shots taken for Harper's Bazaar in the Thirties, plus some earlier works, the whole being hailed as `the beginning of an exciting new look that would forever transform fashion photogra- phy'. The corporation fat-cats are anxious to claim parity with their long-dead pro- tégé: 'Only now, in our media-rich time, has his work come to be seen as he would have wished,' bleats the catalogue, 'com- plex, multi-layered and reflecting the most advanced ideas of his time and culture.'

Man Ray was certainly a catalytic figure, centrally involved in the Dada and Surreal- ist movements manifested in New York and Paris from around 1915 to 1930. His genius lay in his fertile imagination, his skill as an 'inventor' of objects and his ability to set an object outside its natural context. He had a facility with the vocabul- ary of Surrealism which aroused envy and admiration among his peers and gave him notoriety — even while being part of a movement which was all about show- manship, posturing and the debunking of other people's pretensions. The Surrealists lived by a simple creed — that their lives should be as fanciful, aesthetic and modern as the objects which they created, and that the rest of the world should never cease to pay attention: shock, applause, any re- sponse bar indifference would do. But Man Ray had one other, more personal ideal he wanted to be a great painter.

During the 1930s, the decade in which he worked for Harper's Bazaar and other glossy magazines, Man Ray professed 'to hate photography, to want to do only what is necessary to keep me going, and produce something that interests me personally'. He invented a formula for his fashion photography: 'line, colour, texture and, above all, sex appeal', and insisted on being allowed to work in his own studio, where he could employ his ingenious light- ing system of 'photofloods' mounted on lightweight tripods to create the multiple- shadow effects which were one of his favourite motifs. The mass of the photo- graphs taken for Harper's Bazaar are masterly, sophisticated and avant-garde, but, pace the catalogue, they are purely commercial; they are not high art.

One of Man Ray's favourite subjects was the female form. The Surrealist couture model is generally isolated, distant and depersonalised within the photo-frame, or manipulated, cut off at head or waist. 'Legless Fashion Model', c.1940, is a de- mure female head and torso uncannily

frozen in a gawky, dummy-like pose. `Model in Lucien Lelong Gown', 1937, appeared in the Surrealist magazine Mino- taure; it is one of his more compelling images, an overhead shot of the beautiful Lee Millar, Man Ray's collaborator and current amour, seated in a leather- upholstered wheelbarrow designed by the artist Oscar Dominguez — model as port- able goods, a sort of Surrealist reconstruc- tion of the Europa myth. The less accept- able areas in his work are glossed over. Only one rather tame image — 'Untitled', c. 1928-9, a stockings, straps and suspen- ders item — makes reference to the obses- sion with De Sade which he shared with the travel writer William Seabrook, who had a penchant for hiring 'secretaries' whom he chained up or kept in cages.

Some of the most successful images in this oeuvre contain specific reference to classical sources. louiseboulanger', pub- lished in Harper's Bazaar in 1936, shows the model in triplicate, in a sort of 'Three `Torso in Cellophane Dress', c.1930, by Man Ray Graces' assemblage which cleverly allows three views of the gown. The female torso is shown classically draped in cellophane, and 'Beauty in Ultraviolet', 1940, employs a pose straight from Greek statuary to advertise the benefits of ultra-violet sun- baths. These works demonstrate the artist's paradoxical respect for the tradi- tions of fine art, the respect of a man covetous of pre-eminence within the same framework, and failing to achieve it.

As a Surrealist photographer, Man Ray could excel, creating images as statements to be perceived, admired or reacted against. In fashion photography, his greatest legacy must be an exaggerated depersonalisation — the manipulation of the female image in its most extreme form. Undoubtedly, the best photographs in this exhibition occur when Man Ray was work- ing outside the fashion milieu, which he referred to as the 'drudgery' of his profes- sional life, and took as his inspiration the women whom he loved — resulting in `Noire et Blanche', 1926, the portrait of his mistress Kiki with an African mask, and `Lips of Lee Millar', 1930, a recurrent fetishistic image. For Man Ray success in the world of fashion photography was a bitter-sweet experience, It came all too easily. This exhibition is a suitably light- weight epitaph for a lightweight artist.