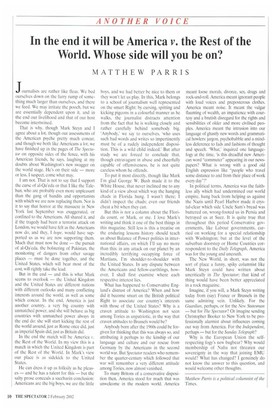 In the end it will be America v. the Rest of the World. Whose side will you be on?

Journalists are rather like fleas. We bed ourselves down on the furry rump of something much larger than ourselves, and there we feed. We may irritate the pooch, but we are essentially dependent upon it, and in the end our livelihood and that of our host become intertwined.

That is why, though Mark Steyn and I agree about a lot, though our assessments of the American psyche pretty much concur, and though we both like Americans a lot, we have finished up in the pages of The Spectator on opposite sides of the fence, with his American friends, he says, laughing at my doubts about Washington's new swagger on the world stage. He's on their side — more or less, I suspect, come what may.

I am not. That is not to say that I support the curse of al-Qa'eda or that I like the Taleban, who are probably even more unpleasant than the gang of bandits and opportunists with which we are now replacing them. Nor is it to say that horror at the massacre in New York last September was exaggerated, or confined to the Americans. All shared it, and if the tragedy had been a terrorist attack on London, we would have felt as the Americans now do, and they, I hope, would have supported us as we are now supporting them. Much that must now be done — the pursuit of al-Qa'eda, the bolstering of Pakistan, the monitoring of dangers from other savage places — must be done together, and the United States, which will bear most of the cost, will rightly take the lead.

But in the end — and this is what Mark seems to overlook — the United Kingdom and the United States are different nations with different outlooks and many conflicting interests around the world, as well as some which concur. In the end, America is just another country, a very big country with unmatched power, and she will behave as big countries with unmatched power always in the end do: she will start kicking the rest of the world around, just as Rome once did, just as imperial Spain did, just as Britain did.

He can dress it up as folksily as he pleases — and he has a talent for this — but the salty prose conceals a saccharin conclusion: Americans are the big boys, we are the little boys, and we had better be nice to them or they won't let us play. In this, Mark belongs to a school of journalism well represented on the smart Right: by cursing, spitting and kicking pigeons in a colourful manner as he walks, the journalist distracts attention from the fact that he is walking closely and rather carefully behind somebody big. 'Anybody,' we say to ourselves, 'who uses such bad words and writes so impertinently must be of a rudely independent disposition. This is a wild child indeed.' But after study we are forced to conclude that, though extravagant in abuse and cheerfully capable of offensiveness, he is not quite careless whom he offends.

To put it most directly, though like Mark I'm glad George W. Bush made it to the White House, that never inclined me to any kind of a view about which way the hanging chads in Florida hung. I wasn't there; I didn't inspect the chads; even our friends cheat a bit when they can.

But this is not a column about the Florida count, or Mark, or me. I love Mark's writing and think it one of the best things in this magazine. Still less is this a treatise on the enduring lessons history should teach us about Balance of Power politics in international affairs, on which I'll say no more than this: in any attack on our planet by an incredibly terrifying occupying force of Martians, I'm shoulder-to-shoulder with the United States. In any dispute between the Americans and fellow-earthlings, however, I shall first examine where each respective interest lies.

What has happened to Conservative England's distrust of America? When and how did it become smart on the British political Right to associate our country's interests with those of the United States? Why is a craven attitude to Washington not seen among Tories as unpatriotic, in the way that craven attitudes to Brussels would be?

Anybody born after the 1960s could be forgiven for thinking that this was always so, and attributing it perhaps to the kinship of our language and culture and our rescue from Germany by the Americans in the second world war. But Spectator readers who remember the quarter-century which followed that war will remember a very different attitude among Tories, now almost vanished.

To many Britons of a conservative disposition then, America stood for much that was unwelcome in the modem world. America meant loose morals, divorce, sex, drugs and rock-and-roll. America meant ignorant people with loud voices and preposterous clothes. America meant noise. It meant the vulgar flaunting of wealth, an impatience with courtesy and a brutish disregard for the rights and sensibilities of older and more civilised peoples. America meant the intrusion into our language of ghastly new words and grammatical howlers: jargon, psychobabble and a mindless deference to fads and fashions of thought and speech. 'What.' inquired one languagefogy at the time, 'is this dreadful new American word "commuter" appearing in our newspapers? What is wrong with a good old English expression like "people who travel some distance to and from their place of work every day"?'

In political terms, America was the faithless ally which had undermined our world empire, hung back from helping us against the Nazis until Pearl Harbor made it crystal-clear which side Uncle Sam's bread was buttered on, wrong-footed us in Persia and betrayed us at Suez. It is quite true that throughout this period Conservative governments, like Labour governments, carried on working for a special relationship with Washington: but at the level of the suburban doorstep or Home Counties correspondent to the Daily Telegraph, America was for the young and uncouth.

The New World, in short, was not the sort of place a funny, spiky columnist like Mark Steyn could have written about uncritically in The Spectator; that kind of thing would have been better appreciated in a rock magazine.

Imagine, if you will, a Mark Steyn writing today from (say) France or Brussels in the same admiring vein. Unlikely. For the Guardian, perhaps, or for the New Statesman — but for The Spectator? Or imagine sending Christopher Booker to New York to be professionally alarmist about influences coming our way from America. For the Independent, perhaps — but for the Sunday Telegraph?

Why is the European Union the selfrespecting fogy's new bugbear? Why would membership of Nafta not threaten our sovereignty in the way that joining EMU would? What has changed? I genuinely do not know the answer to this question, and would welcome other thoughts.

Matthew Pants is a political columnist of the Times.