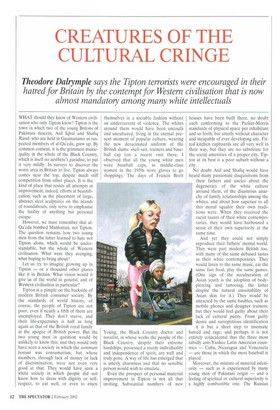 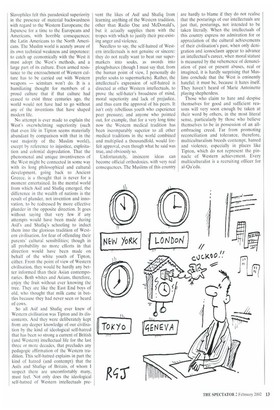 CREATURES OF THE CULTURAL CRINGE

Theodore Dalrymple says the Tipton terrorists were encouraged in their

WHAT should they know of Western civilisation who only Tipton know? Tipton is the town in which two of the young Britons of Pakistani descent, Asif lqbal and Shafiq Rasul, who are held in Guantanamo as suspected members of al-Qa'eda, grew up. By common consent, it is the grimmest municipality in the whole of the Black Country, which is itself no aesthete's paradise, to put it very mildly. In surveys to discover the worst area in Britain to live, Tipton always comes near the top, despite much stiff competition from other places. It is the kind of place that resists all attempts at improvement; indeed, efforts at beautification, such as the placement of large, abstract steel sculptures on the islands of roundabouts, only serve to emphasise the futility of anything but personal escape.

However, we must remember that alQa'eda bombed Manhattan, not Tipton. The question remains how two young men from the latter learned to hate not Tipton alone, which would be understandable, but the whole of Western civilisation. What were they avenging, what hoping to bring about?

Let us try to imagine growing up in Tipton — or a thousand other places like it in Britain. What vision would it give us of the world in general, and of Western civilisation in particular?

Tipton is a pimple on the backside of modern British consumer society. By the standards of world history, of course, the people of Tipton are not poor, even if nearly a fifth of them are unemployed. They don't starve, and their life-expectancy is half as long again as that of the British royal family at the apogee of British power. But the two young men in question would be unlikely to know this; and they would only have seen a society in which the summum bonum was consumerism, but whose members, through lack of money or lack of discrimination, were not even very good at that. They would have seen a white society in which people did not know how to dress with dignity or selfrespect, to eat well, or even to enjoy

themselves in a sociable fashion without an undercurrent of violence. The whites around them would have been uncouth and uncultured, living in the eternal present moment of popular culture, wearing the new deracinated uniform of the British slums: shell suit, trainers and baseball cap (on a recent visit there, I observed that all the young white men wore baseball caps, as middle-class women in the 1950s wore gloves to go shopping). The days of Francis Brett Young, the Black Country doctor and novelist, in whose works the people of the Black Country, despite their extreme hardships, possessed a sturdy individuality and independence of spirit, are well and truly gone. A way of life has emerged that is utterly charmless and that no sensible person would wish to emulate.

Even the prospect of personal material improvement in Tipton is not all that inviting. Substantial numbers of new houses have been built there, no doubt each conforming to the Parker-Morris standards of physical space per inhabitant and so forth, but utterly without character and incapable of ever developing any. Fitted kitchen cupboards are all very well in their way, but they are no substitute for the social amenities of a proper city. Tipton at its best is a poor suburb without a city.

No doubt Asif and Shafiq would have heard many passionate disquisitions from their fathers and uncles about the degeneracy of the white culture around them, of the disastrous anarchy of family relationships among the whites, and about how superior to all this moral squalor their own traditions were. When they received the racist taunts of their white contemporaries, they would have harboured a sense of their own superiority at the same time.

And yet they could not simply reproduce their fathers' mental world. They were part modern British too, with many of the same debased tastes as their white contemporaries. They would listen to the same music, eat the same fast food, play the same games. (One sign of the acculturation of Asian youth is the adoption of bodypiercing and tattooing, the latter despite the natural unsuitability of Asian skin for it.) They would be attracted by the same baubles, such as mobile phones and designer trainers; but they would feel guilty about their lack of cultural purity. From guilty desire and surreptitious identification it is but a short step to insensate hatred and rage; and perhaps it is not entirely coincidental that the three most rabidly anti-Yankee Latin American countries — Cuba, Nicaragua and Venezuela — are those in which the most baseball is played.

Moreover, the mixture of material inferiority — such as is experienced by many young men of Pakistani origin — and a feeling of spiritual or cultural superiority is a highly combustible one. The Russian Slavophiles felt this paradoxical superiority in the presence of material backwardness with regard to the Western Europeans; the Japanese for a time to the Europeans and Americans, with horrible consequences; the Latin Americans to the North Americans. The Muslim world is acutely aware of its own technical weakness and impotence: to catch up economically with the West it must adopt the West's methods, and a large part of its culture. Even armed resistance to the encroachment of Western culture has to be carried out with Western weapons — scimitars won't do. It is a humiliating thought for members of a proud culture that if that culture had ceased to exist three centuries ago, the world would not have had to go without any of the inventions that have shaped modern life.

No attempt is ever made to explain the West's overwhelming superiority (such that even life in Tipton seems materially abundant by comparison with that in the vast majority of the Muslim world), except by reference to injustice, exploitation and colonial depredation. That the phenomenal and unique inventiveness of the West might be connected in some way with its long philosophical and cultural development, going back to Ancient Greece, is a thought that is never for a moment entertained. In the mental world from which Asif and Shafiq emerged, the difference in the wealth of nations is the result of plunder, not invention and innovation, to be redressed by more effective plunder in the opposite direction. It goes without saying that very few if any attempts would have been made during Asif's and Shafiq's schooling to induct them into the glorious tradition of Western civilisation, for fear of offending their parents' cultural sensibilities; though in all probability no more efforts in that direction would have been made on behalf of the white youth of Tipton, either. From the point of view of Western civilisation. they would be hardly any better informed than their Asian contemporaries. Both whites and Asians, therefore, enjoy the fruit without ever knowing the tree. They are like the East End boys of old, who thought that milk came in bottles because they had never seen or heard of cows.

So all Asif and Shafiq ever knew of Western civilisation was Tipton and its discontents. And they were deliberately kept from any deeper knowledge of our civilisation by the kind of ideological self-hatred that has been so strong a current of British (and Western) intellectual life for the last three or more decades, that precludes any pedagogic affirmation of the Western tradition. This self-hatred explains in part the kind of hatred (and contempt) that the Asifs and Shafiqs of Britain, of whom I suspect there are uncomfortably many, must feel. Not only does the ideological self-hatred of Western intellectuals pre

vent the likes of Asif and Shafiq from learning anything of the Western tradition, other than Radio One and McDonald's, but it actually supplies them with the tropes with which to justify their pre-existing anger and violence.

Needless to say, the self-hatred of Western intellectuals is not genuine or sincere: they do not really want to beat our supermarkets into souks, as swords into ploughshares (though I must say that, from the human point of view, I personally do prefer souks to supermarkets). Rather, the intellectual's expression of self-hatred is directed at other Western intellectuals, to prove the self-hater's broadness of mind, moral superiority and lack of prejudice, and thus earn the approval of his peers. It isn't only rebellious youth who experience peer pressure; and anyone who pointed out, for example, that for a very long time now the Western medical tradition has been incomparably superior to all other medical traditions in the world combined and multiplied a thousandfold, would forfeit approval, even though what he said was true, and obviously so.

Unfortunately, insincere ideas can become official orthodoxies, with very real consequences. The Muslims of this country are hardly to blame if they do not realise that the posturings of our intellectuals are just that, posturings, not intended to be taken literally. When the intellectuals of this country express no admiration for or appreciation of the cultural achievements of their civilisation's past, when only denigration and iconoclasm appear to advance an intellectual's career, when moral stature is measured by the vehemence of denunciation of past or present abuses, real or imagined, it is hardly surprising that Muslims conclude that the West is eminently hateful; it must be, because it hates itself. They haven't heard of Marie Antoinette playing shepherdess.

Those who claim to hate and despise themselves for good and sufficient reasons will very soon enough be taken at their word by others, in the most literal sense, particularly by those who believe themselves to be in possession of an allembracing creed. Far from promoting reconciliation and tolerance, therefore, multiculturalism breeds contempt, hatred and violence, especially in places like Tipton, which do not represent the pinnacle of Western achievement. Every multiculturalist is a recruiting officer for al-Oa'eda.