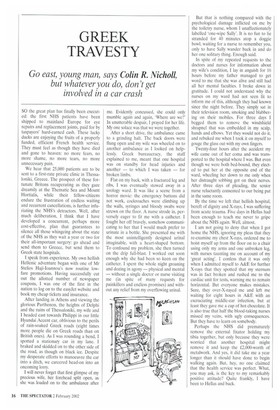 but whatever you do, don't get involved in a car crash

SO the great plan has finally been executed: the first NHS patients have been shipped to mainland Europe for eye repairs and replacement joints, paid for by taxpayers' hard-earned cash. These lucky ducks are enjoying the fruits of a properly funded, efficient French health service. They must feel as though they have died and gone to heaven: no more fears, no more shame, no more tears, no more unnecessary pain.

We hear that 25,000 patients are to be sent to a first-rate private clinic in Thessaloniki, Greece. The prospect of these fortunate Britons recuperating as they gaze dreamily at the Thematic Sea and Mount Hortialis, while their fellow-citizens endure the frustration of endless waiting and recurrent cancellations, is further infuriating the NHS's detractors. Well, after much deliberation, I think that I have developed a concurrent, perhaps more cost-effective, plan that guarantees to silence all those whingeing about the state of the NHS as they wait a year or two for their all-important surgery: go ahead and send them to Greece, but send them to Greek state hospitals.

I speak from experience. My own hellish Hellenic adventure began with one of Mr Stelios Haji-Ioannou's now routine lowfare promotions. Having successfully cut out the allotted number of newspaper coupons, I was one of the first in the nation to log on to the easyJet website and book my cheap tickets and insurance.

After landing in Athens and viewing the glorious Parthenon, the heights of Delphi and the ruins of Thessaloniki, my wife and I headed east towards Philippi in our little Hyundai Accent car, oblivious to the perils of rain-soaked Greek roads (eight times more people die on Greek roads than on British ones). As I was rounding a bend, I spotted a stationary car in my lane. I braked and skidded on to the other side of the road, as though on black ice. Despite my desperate efforts to manoeuvre the car into a ditch, we careered head-on into an oncoming lorry.

I will never forget that first glimpse of my precious wife, her forehead split open, as she was loaded on to the ambulance after me. Evidently concussed, she could only mumble again and again, 'Where are we?' In unutterable despair, I prayed for her life. My one solace was that we were together.

After a short drive, the ambulance came to a grinding halt. The back doors were flung open and my wife was wheeled on to another ambulance as I looked on helplessly. Greek bureaucracy, the staff explained to me, meant that one hospital was on standby for head injuries and another — to which I was taken — for broken limbs.

Flat on my back, with a fractured leg and ribs, I was eventually stowed away in a urology ward. It was like a scene from a horror movie: the emergency buttons did not work, cockroaches were climbing up the walls, syringes and bloody swabs were strewn on the floor. A nurse strode in, perversely eager to fit me with a catheter. I fought her off bravely, somehow communicating to her that I would much prefer to urinate in a bottle. She presented me with the most unintelligently designed urinal imaginable, with a heart-shaped bottom. To confound my problem, she then turned on the drip full-blast. I worked out soon enough why she had been so keen on the catheter. I spent the whole night groaning and dozing in agony — physical and mental — without a single doctor or nurse visiting me (in spite of many requests for painkillers and endless promises) and without any relief from my overflowing urinal. But that is nothing compared with the psychological damage inflicted on me by the toiletry nurse, whom I unaffectionately labelled 'one-wipe Sally'. It is no fun to lie stranded for 40 minutes atop a doggie bowl, waiting for a nurse to remember you, only to have Sally wander back in and do her one solitary thing. Enough said.

In spite of my repeated requests to the doctors and nurses for information about my wife's condition, I lay in anguish for 16 hours before my father managed to get word to me that she was alive and still had all her mental faculties. I broke down in gratitude. I could not understand why the nurses on my ward had not seen fit to inform me of this, although they had known since the night before. They simply sat in their television room, smoking and blabbering on their mobiles. For three days I begged them to remove the windshield shrapnel that was embedded in my scalp, hands and elbows. Yet they would not do it, and rebuked me when I took it on myself to gouge the glass out with my own fingers.

Twenty-four hours after the accident my wife came out of her coma and was transported to the hospital where I was. But even though we were both bed-bound, they elected to put her at the opposite end of the ward, wheeling her down to me only when her distraught sobbing got on their nerves. After three days of pleading, the senior nurse reluctantly consented to our being put in the same room.

By the time we left that hellish hospital, bereft of dignity and X-rays, I was suffering from acute trauma. Five days in Hellas had been enough to teach me never to gripe about the NHS again. Well, almost.

I am not going to deny that when I got home the NHS, ignoring my pleas that they re-examine my chest X-rays, ordered me to hoist myself up from the floor on to a chair using only my arms and one unbroken leg, with nurses taunting me on account of my 'great acting'. I confess that it was only when I admitted myself to A&E for further X-rays that they spotted that my sternum was in fact broken and rushed me to the cardiac unit for tests, warning me to remain horizontal. But everyone makes mistakes. Sure, they over-X-rayed me and left me waiting for eight hours in A&E with an excruciating middle-ear infection, but at least they gave me a cup of hot chocolate. It is also true that half the blood-taking nurses missed my veins, with ugly consequences. But they have to learn on somebody.

Perhaps the NHS did prematurely remove the external fintor holding my tibia together, but only because they were worried that another hospital might remove it and keep the £2,000-worth of metalwork. And yes, it did take me a year longer than it should have done to begin walking again. But, hey, no one claimed that the health service was perfect. What, you may ask, is the key to my remarkably positive attitude? Quite frankly, I have been to Hellas and back.