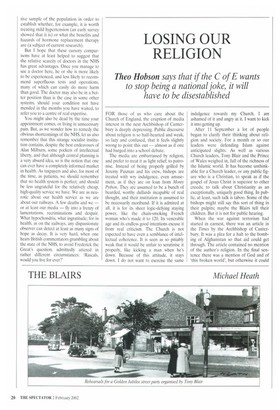 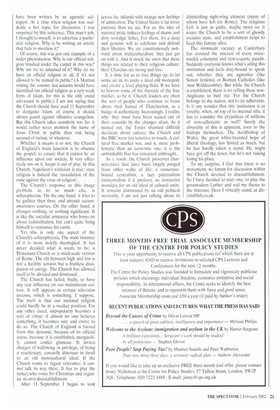 Theo Hobson says that if the C of E wants

to stop being a national joke, it will have to be disestablished

FOR those of us who care about the Church of England, the eruption of media interest in the next Archbishop of Canterbury is deeply depressing. Public discourse about religion is so half-hearted and weak, so lazy and confused, that it feels slightly wrong to point this out — almost as if one had barged into a school debate.

The media are embarrassed by religion, and prefer to treat it as light relief; to patronise. Instead of being properly grilled by Jeremy Paxman and his crew, bishops are treated with wry indulgence, even amusement, as if they are on loan from Monty Python. They are assumed to be a bunch of bearded, worthy dullards incapable of real thought, and their institution is assumed to be necessarily moribund. If it is admired at all, it is for its sheer logic-defying staying power, like the chain-smoking French woman who's made it to 120. Its venerable age and its endless good intentions excuse it from real criticism. The Church is not expected to have even a semblance of intellectual coherence. It is seen as so pitiably weak that it would be unfair to scrutinise it properly, like kicking a man when he's down. Because of this attitude, it stays down. I do not want to exercise the same indulgence towards my Church. I am ashamed of it and angry at it. I want to kick it into getting up.

After 11 September a lot of people began to clarify their thinking about religion and society. For a month or so our leaders were defending Islam against anticipated slights. As well as various Church leaders, Tony Blair and the Prince of Wales weighed in, full of the richness of the Islamic world. It has become unthinkable for a Church leader, or any public figure who is a Christian, to speak as if the gospel of Jesus Christ is superior to other creeds; to talk about Christianity as an exceptionally, uniquely good thing. In public, at least, such talk is taboo. Some of the bishops might still say this sort of thing in their pulpits; maybe the Blairs tell their children. But it is not for public hearing.

When the war against terrorism had started in earnest, there was an article in the Times by the Archbishop of Canterbury. It was a plea for a halt to the bombing of Afghanistan so that aid could get through. The article contained no mention of the author's religion. In the final sentence there was a mention of God and of 'this broken world', but otherwise it could have been written by an agnostic aidexpert. At a time when religion was suddenly a hot topic for discussion, I was surprised by this reticence. This man's job, I thought to myself, is to advertise a particular religion. Why is he writing an article that fails to mention it?

Of course, this was just one example of a wider phenomenon. Why is our official religion brushed under the carpet in this way? Why are we so ashamed of it? Why do we have an official religion at all, if it's not allowed to be named in public? (A Martian visiting the country last autumn would have identified our official religion as a very weak form of Islam, for this is the only creed advocated in public.) I am not saying that the Church should have used 11 September to denigrate Islam; of course it should always guard against offensive evangelism. But this Church takes sensitivity too far: it would rather never mention the name of Jesus Christ in public than risk being accused of racism, or whatever.

Whether it means it or not, the Church of England's main function is to obscure the gospel; to ensure that it cannot be an influence upon our society. It very effectively sits on it, keeps it out of play. In this Church. Napoleon's witticism is true: state religion is indeed the 'inoculation of the state against the virus of religion'.

The Church's response to this image problem, as to so much else, is schizophrenic. On the one hand, it tries to be guiltier than thou, and attends racismawareness courses. On the other hand, it changes nothing, or nothing significant. It is like the socialist aristocrat who bores on about redistribution, but can't quite bring himself to renounce his castle.

Yet this is only one aspect of the Church's schizophrenia. The main instance of it is more strictly theological. It has never decided what it wants to be: a Protestant Church or a small-scale version of Rome. The rift between high and low is not a healthy tension but a fruitless dissipation of energy. The Church has allowed itself to be divided and dismissed.

The Church has failed, badly, to have any real influence on our mainstream culture. It still appears in certain television sitcoms, which is something, I suppose. The truth is that our national religion could hardly be in a weaker position. For any other creed, unpopularity becomes a sort of virtue: if almost no one believes something, it becomes rare and exotic to do so. The Church of England is barred from this dynamic; because of its official status, because it is established, marginality cannot confer glamour. It invites charges of wallowing in privilege, of being a reactionary, cowardly dinosaur in thrall to an old monocultural ideal. If the Church wants to regain relevance, it cannot talk its way there. It has to play the turkey who votes for Christmas and organise its own disestablishment.

After 11 September I began to look

across the Atlantic with strange new feelings of admiration. The United States is far more patriotic than we are. For us, the idea of national pride induces feelings of shame and dirty nostalgic itches. For them, it's a deep and genuine will to celebrate and defend their liberties. We are constitutionally awkward about multiculturalism; they just get on with it. And it struck me anew that these things are related to their religious culture: their Churches are strong and free.

It is time for us to free things up, to let some air in, to undo a tired old monopoly and create a level playing-field. If we have to borrow some of the rhetoric of the free market, so be it. Church leaders are often the sort of people who continue to boast about their hatred of Thatcherism, as a badge of authenticity. Increasingly, I realise why: they must have been scared out of their cassocks by the changes afoot. As it turned out, the Tories shunned difficult decisions about culture; the Church and the BBC were too sensitive to touch. A cultural free market was, and is, more problematic than an economic one; it is the unthinkable that has remained unthought.

As a result, the Church preserves characteristics that have been largely purged from other walks of life: a consensusbound centralism, a lazy paternalism (maternalism if it prefers), an instinctive nostalgia for an old ideal of cultural unity. It remains dominated by an old political mentality. I am not just talking about its

diminishing right-wing element (many of whom have left for Rome). The religious Left is just as guilty, maybe more so: it wants the Church to be a sort of ghostly socialist state, and establishment helps to keep this fantasy alive.

The imminent vacancy at Canterbury has aroused the interest of every twiceweekly columnist and rent-a-quote pundit. Suddenly everyone knows what's ailing this institution and feels duty-bound to speak out, whether they are agnostics (like Simon Jenkins) or Roman Catholics (like Ann Widdecombe). But while the Church is established, there is no telling these nonAnglicans to butt out. For the Church belongs to the nation, not to its adherents. Is it any wonder that this institution is in trouble, when, on top of its internal rifts, it has to consider the prejudices of millions of non-adherents as well? Surely the absurdity of this is apparent, even to the bishops themselves. The Archbishop of Wales, the great white-bearded hope of liberal theology, has hinted as much, but he has hardly taken a stand. He might have got off the fence, but he's not risking losing his place.

To my surprise. I find that there is no movement, no forum for discussion within the Church devoted to disestablishment. So I have decided to start one; to play the postmodern Luther and nail my theses to the Internet. Here I virtually stand, at disestablish.co.uk.