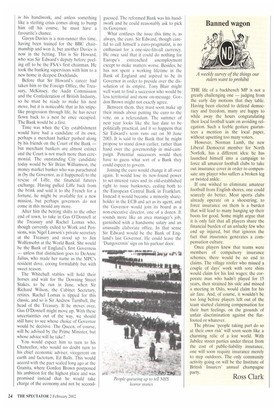 THE life of a backbench MP is not a greatly challenging one — judging from the early day motions that they table. Having been elected to defend democracy and freedom, many are happy to while away the hours congratulating their local football team on avoiding relegation. Such a feeble gesture guarantees a mention in the local paper, without upsetting too many voters.

However, Norman Lamb, the new Liberal Democrat member for North Norfolk, has a different idea: he has launched himself into a campaign to force all amateur football clubs to take out insurance cover in order to compensate any player who suffers a broken leg or twisted ankle.

If one wished to eliminate amateur football from English shores, one could scarcely do better. Most sports clubs already operate on a shoestring; to force insurance on them is a burden that will lead to many hanging up their boots for good. Some might argue that it is only fair that all players share the financial burden of an unlucky few who end up injured, but that ignores the fact that insurance generates a compensation culture.

Once players knew that teams were members of compulsory insurance schemes, there would be no end to claims. The village roofer who missed a couple of days' work with sore shins would claim for his lost wages; the corporate man who hadn't played for 15 years, then strained his side and missed a meeting in Oslo, would claim for his air fare. And, of course, it wouldn't be too long before players left out of the team started claiming compensation for their hurt feelings, on the grounds of unfair discrimination against the flatfooted or whatever.

The phrase 'people taking part do so at their own risk' will soon seem like a charming relic of a lost world. With Jubilee street parties under threat from the cost of public-liability insurance, one will soon require insurance merely to step outdoors. The only community activity going on will be the Institute of British Insurers' annual champagne party.