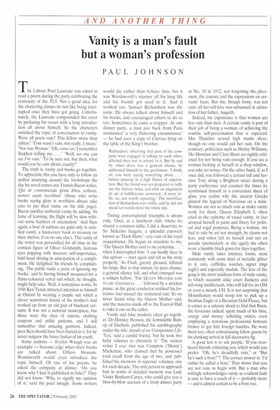 Vanity is a man's fault but a woman's profession

The Labour Poet Laureate was asked to read a poem during the party celebrating the centenary of the TLS. Not a good idea, for the chattering classes do not like being interrupted once they have got going. Unfortunately, the Laureate compounded the error by prefacing his verses with a long introduction all about himself. So the chatterers switched the topic of conversation to vanity. Were all poets vain? This fellow more than others? Tom wasn't vain, not really, I mean.' 'Nor was Wystan."Oh, come on, I remember Stephen telling me. . . . Well. no one can say I'm vain.' To be sure not, but then, what would you be vain about, exactly?'

The truth is, vanity and books go together. To appreciate this you have only to follow an author scurrying around the bookshops the day his novel comes out. Francis Bacon writes. 'Qui de contemnenda gloria libros scribunt, nomen suum inscribunt' (those who write books saying glory is worthless always take care to put their name on the title page). Bacon justifies authorial vanity by adding, In fame of learning, the flight will be slow without some feathers of ostentation.' And then again, a host of authors are paid only in satisfied vanity, a hard-cover book to treasure on their shelves, if on no one else's. The vanity of the writer was personified for all time in the comical figure of Oliver Goldsmith, lustrous eyes popping with insecure self-importance, bald head shining in anticipation of a compliment. He delighted his friends by complaining, 'The public make a point of ignoring my books,' and by having himself measured for a flame-coloured velvet suit which, he thought, might help sales. Well, it sometimes works. In 1946 Ken Tynan attracted attention to himself at Oxford by wearing a purple suit which a clever seamstress friend of his mother's had worked up from an old pair of blackout curtains. It was not a sartorial masterpiece, but those were the days of rations, clothing coupons and utility patterns, and I still remember that amazing garment. Indeed, poor Ken should have been buried in it, for he never outgrew the brave fustian of his youth.

Some authors — Evelyn Waugh was an example — become edgy when their books are talked about. Others blossom. Wordsworth would even introduce the topic himself. Of one of his poems, he asked the company at dinner, 'Do you know why I had it published in folio?' They did not know. 'Why, to signify my opinion of it,' said the poet smugly. Some writers would die rather than behave thus, but it was Wordsworth's manner all his long life and his friends got used to it. And it worked too. Samuel Richardson was the same. He always talked about himself and his books, and encouraged others to do so too. Sometimes he came a cropper. At one dinner party, a man just back from Paris mentioned 'a very flattering circumstance' — he had seen a copy of Clarissa lying on the table of the King's brother.

Richardson, observing that part of the company were engaged in talking to each other, affected then not to attend to it. But by and by, when there was a general silence, he addressed himself to the gentleman: think, sir, you were saying something about.... ' before pausing in a high flutter of expectation. But the friend was not prepared to ladle out the flattery twice, and with an exquisitely sly air of indifference answered, 'A mere trifle, sir, not worth repeating. The mortification of Richardson was visible, and he did not speak ten words more the whole day.

Timing conversational triumphs is always risky. Once, at a luncheon club, where we shared a common table, I did a disservice to Sir Malcolm Sargent, a splendid extrovert known as 'Flash Harry'. very vain of his royal acquaintance. He began an anecdote to me, The Queen Mother said to me yesterday. when I interrupted him: 'I can hardly hear in this uproar — start again and tell us the story properly.' So Flash, greatly pleased, inflated his lungs. But in that instant, by pure chance, a general silence fell, and what emerged was a solitary bellow, 'THE QUEEN MOTHER SAID TO ME YESTERDAY. . 'followed by a stricken pause, as the great conductor realised his fortissimo had missed the orchestral nun. So we never heard what the Queen Mother said, and the maestro slunk off to the Festival Hall to take it out on the cellos.

Vanity and false modesty often go together. Dr Hensley Henson, the formidable Bishop of Durham, published his autobiography under the title Annals of an Unimportant Life. 'Yes,' said a candid friend, tut he took two hefty volumes to chronicle it.' The vainest writer I ever met was Compton (`Monty) Mackenzie, who claimed that he possessed total recall from the age of two, and published his memoirs in separate volumes, one for each decade. The only person to approach him in terms of detailed memory was Lady Violet Bonham-Carter, who could give you a blow-by-blow account of a lively dinner party

at No. 10 in 1912, not forgetting the placement, the courses and the expressions on servants' faces. But she, though bossy, was not vain: all her self-love was subsumed in adoration of her father, Asquith.

Indeed, my experience is that women are less vain than men. A certain vanity is part of their job of being a woman, of achieving the routine self-presentation that is expected. Mrs Thatcher scored high marks there, though no one would call her vain. On the contrary, politicians such as Shirley Williams, Mo Mowlam and Clare Short are rightly criticised for not being vain enough. If you see a woman looking at herself in a shop window, you take no notice. On the other hand, if, as I once did, you followed a certain tall and leonine Tory along a Brighton street during a party conference and counted the times he scrutinised himself in a convenient sheet of glass, you realise why the ancient Greeks pinned the legend of Narcissus on a male. Women are not so much vain as make vanity work for them. Queen Elizabeth I, often cited as the epitome of visual vanity, in fact arrayed herself in paint and finery for political and regal purposes. Being a woman, she had to rule by art not strength, by charm not fear, and when left to herself and not on parade (particularly as she aged) she often wore a humble black gown for days together.

Male vanity takes intimate forms, most commonly with some kind of metallic glitter to it: cars, cufflinks, watches, signet rings (ugh!) and especially medals. The lure of the gong is the most insidious form of male vanity, to which succumb alike court flunkeys and left-wing intellectuals, who will kill for an OM or even a measly CH. It is not surprising that Mountbatten would stoop low to pick up a Swabian Eagle or a Bavarian Gold Fleece, but it comes as a salutary shock to find that Ibsen, the ferocious radical, spent much of his time, energy and money soliciting orders, even employing a notorious professional honours broker to get him foreign baubles. He wore them too, often embarrassing fellow guests by his clanking arrival in full decorative fig.

A good test is to ask people, 'If you overheard friends criticising you, which would you prefer: "Oh, he's dreadfully vain," or "But he's such a bore!"?' The correct answer is: `I'd rather be called a bore.' That shows that you are not vain, to begin with. But a man who willingly acknowledges vanity as a salient fault is sure to have a touch of it — probably more — and is almost certain to be a bore too.