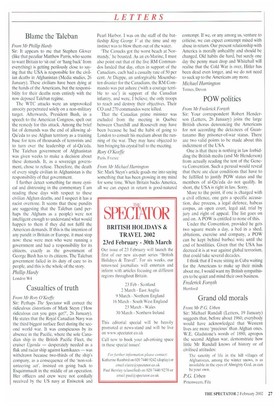 From Mr Rmy O'Keeffe Sir: Perhaps The Spectator will correct the ridiculous distortions of Mark Step (`How ridiculous can you guys get?', 26 January). He states that the Royal Canadian Navy was the third biggest surface fleet during the second world war. It was conspicuous by its absence in the Pacific, where the sole Canadian ship in the British Pacific Fleet, the cruiser Uganda — desperately needed as a flak and radar ship against kamikazes — was withdrawn because two-thirds of the ship's company, as a consequence of the 'non-volunteering act', insisted on going back to Esquimmault in the middle of an operation. Her officers and crew were not cordially received by the US navy at Eniwetok and Pearl Harbor, I was on the staff of the battleship King George V at the time and my instinct was to blow them out of the water.

'The Canucks got the worst beach at Normandy,' he boasted. As an ex-Marine, I must also point out that of the five RM Commandos landed that day, often in support of the Canadians, each had a casualty rate of 50 per cent. At Dieppe, an unforgivable Mountbatten disaster for the Canadians, the RM Commando was put ashore ('with a courage terrible to see') in support of the Canadian infantry, and were, I believe, the only troops to reach and destroy their objectives, Their CO and 270 commandos were killed.

That the Canadian prime minister was excluded from the meeting in Quebec between Churchill and Roosevelt may have been because he had the habit of going to London to consult his medium about the running of the war. They may have objected to him bringing his crystal ball to the meeting.