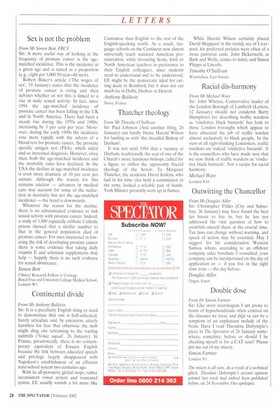 From Mr Anthony Baldwin Sir: It is a peculiarly English thing to need to demonstrate that one is half-educated, barely articulate and, by extension, utterly harmless for fear that otherwise the mob might drag one screaming to the waiting tumbrils (`Voice squad'. 26 January). In France, paradoxically, there is no contemporary equivalent of Estuary English because the link between educated speech and privilege largely disappeared with Napoleon's establishment of an efficient state-school system two centuries ago.

With its all-pervasive glottal stops, rather inconsistent vowel system and truncated syntax, EE usually sounds a lot more like Cantonese than English to the rest of the English-speaking world. As a result, language schools on the Continent now almost universally teach standard American pronunciation, while favouring Scots, Irish or North American teachers in preference to their English colleagues, since students need to understand and to be understood. EE might be the democratic ideal for cutting deals in Romford, but it does not cut much ice in Delhi. Durban or Detroit. Anthony Baldwin