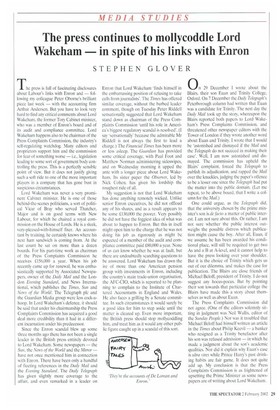 Page 29, 2 February 2002 — The press continues to mollycoddle Lord Wakeham in spite of his links with Enron
Close

The press is full of fascinating disclosures about Labour's links with Enron and — following my colleague Peter Oborne's brilliant piece last week — with the accounting firm Arthur Andersen. But you have to look very hard to find any critical comments about Lord Wakeham, the former Tory Cabinet minister, who was a member of Enron's board and of its audit and compliance committee. Lord Wakeham happens also to be chairman of the Press Complaints Commission, the industry's self-regulating watchdog. Many editors and proprietors support him and the commission for fear of something worse — i.e., legislation leading to some sort of government body controlling the press. This is a perfectly sensible point of view. But it does not justify giving such a soft ride to one of the more important players in a company that has gone bust in suspicious circumstances.

Lord Wakeham was never a very prominent Cabinet minister. He is one of those behind-the-scenes politicians, a sort of political Vicar of Bray who served Thatcher, Major and is on good terms with New Labour, for which he chaired a royal commission on the House of Lords. He is a sleek, very-pleased-with-himself fixer. An accountant by training, he certainly knows where his next ham sandwich is coming from. At the last count he sat on more than a dozen boards. For his part-time work as chairman of the Press Complaints Commission he receives £156,000 a year. When his job recently came up for renewal, he was enthusiastically supported by Associated Newspapers, owner of the Daily Mail and the London Evening Standard, and News International, which publishes the Times, Sun and News of the World. The Telegraph plc and the Guardian Media group were less cock-ahoop, In Lord Wakeham's defence, it should be said that under his chairmanship the Press Complaints Commission has acquired a good deal more credibility than it had in a different incarnation under his predecessor.

Since the Enron scandal blew up some three months ago there has not been a single leader in the British press entirely devoted to Lord Wakeham. Some newspapers — the Sun, the News of the World and the Mirror — have not once mentioned him in connection with Enron, There have been only a handful of fleeting references in the Daily Mail and the Evening Standard. The Daily Telegraph has given slightly more coverage to the affair, and even remarked in a leader on Enron that Lord Wakeham `finds himself in the embarrassing position of refusing to take calls from journalists'. The Times has offered similar coverage, without the barbed leader comment, though on Tuesday Peter Riddell sensationally suggested that Lord Wakeham stand down as chairman of the Press Complaints Commission 'until his role in America's biggest regulatory scandal is resolved'. (I say 'sensationally' because the admirable Mr Riddell is not always the first to lead a charge.) The Financial Times has been more or less asleep. The Guardian has provided some critical coverage, with Paul Foot and Matthew Norman administering sideswipes, and on Wednesday morning it upped the ante with a longer piece about Lord Wakeham. Its sister paper the Observer, led by Nick Cohen, has given his lordship the roughest ride of all.

My suggestion is not that Lord Wakeham has done anything remotely wicked. Unlike senior Enron executives, he did not offload any of his shares, and as a result appears to be some .E130,000 the poorer. Very possibly he did not have the foggiest idea of what was about to happen to Enron. But this in itself might open him to the charge that he was not doing his job as rigorously as might be expected of a member of the audit and compliance committee paid £80,000 a year. None of us can know whether he was at fault, but there are undoubtedly searching questions to be answered. Lord Wakeham has drawn the ire of more than one American pension group with investments in Enron, including the country's main trade-union organisation, the AFC-CIO, which is reported to be planning to complain to the Institute of Chartered Accountants in England and Wales. He also faces a grilling by a Senate committee. In such circumstances it would surely be a good idea for him to step aside until the matter is cleared up. Even more important, the British press should stop mollycoddling him, and treat him as it would any other public figure caught up in a scandal of this sort.

0 n 29 December I wrote about the Blairs, their son Euan and Trinity College, Oxford. On 7 December the Daily Telegraph's Peterborough column had written that Euan was a candidate for Trinity. The next day the Daily Mail took up the story, whereupon the Blairs reported both papers to Lord Wakeham's Press Complaints Commission, and threatened other newspaper editors with the Tower of London if they wrote another word about Euan and Trinity. I wrote that I would be 'astonished and dismayed if the Mail and the Telegraph do not succeed in making their case'. Well, I am now astonished and dismayed. The commission has upheld the Blairs' complaint, forced the Telegraph to publish its adjudication, and rapped the Mail over the knuckles, judging the paper's offence to be a lesser one since the Telegraph had put the matter into the public domain. (Let me repeat, to be above board, that I write a column for the Mail.) One could argue, as the Telegraph did, that the university chosen by the prime minister's son is de facto a matter of public interest. I am not sure about this. Or rather, I am not sure whether the public interest outweighs the possible distress which publication might cause the boy. After all, Euan, if we assume he has been awarded his conditional place, will still be required to get two As and a B at A-level, and it cannot help to have the press looking over your shoulder. But it is the choice of Trinity which gets us Out of our dilemma, and makes the ease for publication. The Blairs are close friends of Michael Beloff, president of Trinity. I do not suggest any hocus-pocus. But by pointing their son towards that particular college the Blairs have made this a story about themselves as well as about Euan.

The Press Complaints Commission did not agree. (One of the editors solemnly sitting in judgment was Neil Wallis, editor of the Sunday People.) Nor was it troubled that Michael Beloff had himself written an article in the Times about Philip Keevil — a banker who resigned as a Trinity benefactor after his son was refused admission — in which he made a judgment about the son's academic qualities. Nor did it explain why Euan's case is ultra vires while Prince Harry's past drinking habits are fair game. It does not quite add up. My conclusion is that the Press Complaints Commission is as frightened of upsetting the Prime Minister as some newspapers are of writing about Lord Wakeham.