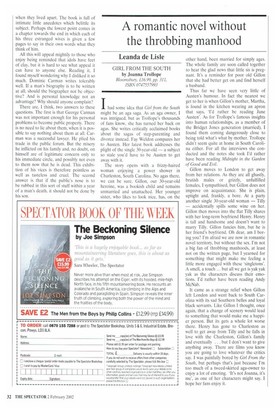 Page 36, 2 February 2002 — A romantic novel without the throbbing manhood
Close

A romantic novel without the throbbing manhood

GIRL FROM THE SOUTH by Joanna TroHope Blooms-bury, £16.99, pp. 311, ISBN 0747557993 Ihad some idea that Girl from the South might be an aga saga. As an aga owner, I was intrigued, but as Trollope's thousands of fans know, she has turned her back on agas. She writes critically acclaimed books about the sagas of step-parenting and divorce instead. Fay Weldon compares her to Austen. Her latest book addresses the plight of the single 30-year-old — a subject so stale you'd have to be Austen to get away with it.

The story opens with a frizzy-haired woman enjoying a power shower in Charleston, South Carolina. No agas there, we can be sure. Gillon, our 30-year-old heroine, was a bookish child and remains unmarried and unattached. Her younger sister, who likes to look nice, has, on the other hand, been married for simply ages. The whole family are soon called together to hear the glad news that little sis is pregnant. It's a reminder for poor old Gillon that she had better get on and find herself a husband.

Thus far we have seen very little of Austen's humour. In fact the nearest we get to her is when Gillon's mother, Martha, is found in the kitchen wearing an apron that says, 'I'd rather be reading Jane Austen'. As for Trollope's famous insights into human relationships, as a member of the Bridget Jones generation (married), I found them coming dangerously close to being told what's what by mother. Trollope didn't seem quite at home in South Carolina either. For all the interviews she conducted and the notes she took I'd rather have been reading Midnight in the Garden of Good and Evil.

Gillon moves to London to get away from her relations. As they are all ghastly, brutish males or grizzly, unfulfilled females, I sympathised, but Gillon does not improve on acquaintance. She is plain, uptight and, frankly, a bore. At a party another single 30-year-old woman — Tilly — accidentally spills some wine on her. Gillon then moves into the flat Tilly shares with her long-term boyfriend Henry. Henry is tall and handsome and doesn't want to marry Tilly. Gillon fancies him, but he is her friend's boyfriend. Oh dear, am I boring you? I'm afraid we are now in romantic novel territory, but without the sex. I'm not a big fan of throbbing manhoods, at least not on the written page, but I yearned for something that might make me feeling a little more engaged with these 'singletons'. A smell, a touch ... but all we get is yak yak yak as the characters discuss their emotions. I'd rather have been reading Andy McNab.

It came as a strange relief when Gillon left London and went back to South Carolina with its sad Southern belles and loyal black servants. Like Gillon I thought, once again, that a change of scenery would lead to something that would make me a happier person. But its gets a whole lot worse there. Henry has gone to Charleston as well to get away from Tilly and he falls in love with the Charleston, Gillon's family and eventually . . but I don't want to give anything away. There are films you know you are going to love whatever the critics say. I was painfully bored by Girl From the South, but perhaps that's just because I'm too much of a tweed-skirted aga-owner to enjoy a lot of emoting. 'It's not Joanna, it's me', as one of her characters might say. I hope her fans enjoy it.