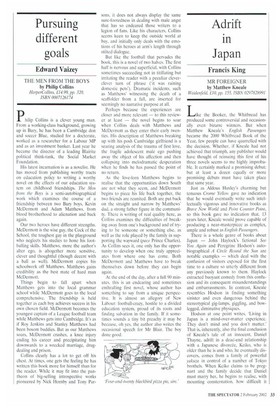 THE MEN FROM THE BOYS by Philip Collins HaiperCollins, £14.99, pp. 320, ISBN 0007126174 Philip Collins is a clever young man. From a working-class background, growing up in Bury, he has been a Cambridge don and soccer Blue, studied for a doctorate, worked as a researcher for a Labour MP and as an investment banker. Last year he became the director of a leading Blairite political think-tank, the Social Market Foundation.

His latest incarnation is as a novelist. He has moved from publishing worthy tracts on education policy to writing a worthy novel on the effects of our education system on childhood friendships. The Men from the Boys is a semi-autobiographical work which examines the course of a friendship between two Bury boys, Kevin McDermott and Adam Matthews, from blood brotherhood to alienation and back again.

Our two heroes have different strengths. McDermott is the wise guy, the Cock of the School, the toughest guy in the playground who neglects his studies to hone his footballing skills. Matthews, more the author's alter ego, is altogether more sensitive, clever and thoughtful (though decent with a ball as well). McDermott copies his schoolwork off Matthews. Matthews gains credibility as the best mate of hard man McDermott.

Things begin to fall apart when Matthews gets into the local grammar school while McDermott goes to the local comprehensive. The friendship is held together as each boy achieves success in his own chosen field, McDermott becomes the youngest captain of a League football team while Matthews gets into Cambridge. It's as if Roy Jenkins and Stanley Matthews had been bosom buddies. But as our Matthews soars, McDermott crashes, a knee injury ending his career and precipitating him downwards to a wrecked marriage, drugdealing and prison.

Collins clearly has a lot to get off his chest. At times, one gets the feeling he has written this book more for himself than for the reader. While it may fit into the pantheon of big-selling introspective works pioneered by Nick Hornby and Tony Par

sons, it does not always display the same sure-footedness in dealing with male angst that has so endeared those writers to a legion of fans. Like his characters, Collins seems keen to keep the outside world at bay, and initially only deals with the emotions of his heroes at arm's length through stilted dialogue.

But like the football that pervades the book, this is a novel of two halves. The first half is nervous and superficial, with Collins sometimes succeeding not in titillating but irritating the reader with a peculiar cleverclever turn of phrase ('it was raining domestic pets'). Dramatic incidents, such as Matthews' witnessing the death of a scaffolder from a fall, are inserted for seemingly no narrative purpose at all.

Perhaps because the experiences are closer and more relevant — to this reviewer at least — the novel begins to soar when Collins deals with Matthews and McDermott as they enter their early twenties, His description of Matthews breaking up with his posh Cambridge girlfriend is a searing analysis of the trauma of first love, the fragile adolescent male ego pushing away the object of his affection and then collapsing into melodramatic desperation when he finds he has passed the point of no return.

As the love-torn Matthews begins to realise that the opportunities down South are not what they seem, and McDermott begins to piece his life back together, the two friends are reunited. Both are put back on the straight and narrow by Matthews' dad, a strong father figure in the community. There is writing of real quality here, as Collins examines the difficulties of breaking away from one's background and of trying to be someone or something else, as well as the role played by the family in supporting the wayward (pace Prince Charles). As Collins sees it, one only has the opportunity to develop when one truly appreciates from where one has come. Both McDermott and Matthews have to break themselves down before they can begin again.

At the end of the day, after a full 90 minutes. this is an endearing and sometimes enthralling first novel, whose author has something to say from a unique perspective. It is almost an allegory of New Labour: football-crazy, hostile to a divided education system, proud of its roots and finding salvation in the family. If it sometimes sounds a tiny bit preachy it may be because, oh yes, the author also writes the occasional speech for Mr Blair. The boy done good.