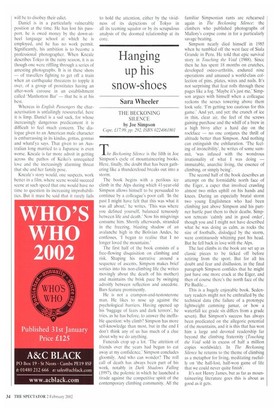 THE BECKONING SILENCE by Joe Simpson Cape, £17.99, pp. 292, ISBN 0224061801 he Beckoning Silence is the fifth in Joe Simpson's cycle of mountaineering books. Here, finally, the doubt that has been gathering like a thundercloud breaks out into a storm.

The book begins with a perilous ice climb in the Alps during which 41-year-old Simpson allows himself to be persuaded to continue by a colleague's poor call. 'In the past I might have felt that this was what it was all about,' he writes. This was where you defined yourself, balanced tenuously between life and death.' Now his misgivings consume him. Shortly afterwards, stranded in the freezing, blasting shadow of an avalanche high in the Bolivian Andes, he confesses, '1 began to realise that I no longer loved the mountains.'

The first half of the book consists of a free-flowing disquisition on climbing and risk. Shaping his narrative around a sequence of ascents. Simpson makes brief sorties into his non-climbing life (he writes movingly about the death of his mother) and maintains the brisk pace by swinging adroitly between reflection and anecdote. Bars feature prominently.

He is not a crampon-and-testosterone man. He likes to nose up against the psychological barriers. Having opened up his 'baggage of fears and dark terrors', he tries, as he has before, to answer the ineffable question: why climb? Simpson has more self-knowledge than most, but in the end I don't think any of us has much of a clue about why we do anything.

Funerals crop up a lot. 'The attrition of friends over the years had begun to eat away at my confidence,' Simpson concludes gloomily. And who can wonder? The roll call of death has always been part of his work, notably in Dark Shadows Falling (1997), the polemic in which he launched a tirade against the competitive spirit of the contemporary climbing community. All the familiar Simpsonian rants are rehearsed again in The Beckoning Silence: the climbers who published photographs of Mallory's corpse come in for a particularly savage beating.

Simpson nearly died himself in 1985 when he tumbled off the west face of Siula Grande in Peru. He told that epic survival story in Touching the Void (1988). Since then he has spent 18 months on crutches, developed osteo-arthritis, endured nine operations and amassed a world-class collection of pins, plates, wires and nails. It's not surprising that fear rolls through these pages like a fog. 'Maybe it's just me,' Simpson argues with himself when a colleague reckons the seracs towering above them look safe. 'I'm getting too cautious for this game.' And yet, and yet: the crunch of ice in thin, clear air, the feel of the screws gaining purchase and the whiff of a brew in a high bivvy after a hard day on the rockface — no one conjures the thrill of altitude better than Simpson. And nothing can extinguish the exhilaration. 'The feeling of invincibility', he writes of some summit, 'was infused with the wondrous irrationality of what I was doing — immutable, anarchic living, the essence of climbing, or simply being'.

The second half of the book describes an attempt on the formidable north face of the Eiger, a caper that involved crawling almost two miles uphill on his hands and knees. During an especially brutal storm two young Englishmen who had been climbing just above Simpson and his partner hurtle past them to their deaths. Simpson retreats 'calmly and in good order', though you and I might not have described what he was doing as calm, as rocks the size of footballs, dislodged by the storm, were continuously whizzing past his head. But he fell back in love with the Alps.

The last climbs in the book are set up as classic pieces to be ticked off before retiring from the sport. But for all his doubt and fear and disillusion, in the final paragraph Simpson confides that he might just have one more crack at the Eiger, and then of course there's the north face of the Piz Badile...

This is a hugely enjoyable book. Sedentary readers might not be enthralled by the technical data (the failure of a prototype lightweight camming jumar, or how a waterfall ice grade six differs from a grade seven). But Simpson's success has always been predicated on the allegoric potential of the mountains, and it is this that has won him a large and devoted readership far beyond the climbing fraternity (Touching the Void sold in excess of half a million copies worldwide). In The Beckoning Silence he returns to the theme of climbing as a metaphor for living, meditating ruefully on 'the half-lost, half-won game of life that we could never quite finish'.

It's not Henry James, but as far as mountaineering literature goes this is about as good as it gets.