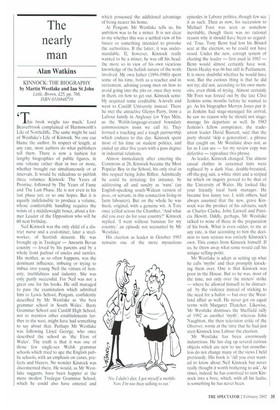 KINNOCK: THE BIOGRAPHY by Martin Westlake and Ian St John Little, Brown, £25, pp. 768, ISBN 0316848719 his book weighs too much,' Lord Beaverbrook complained of Harmsworth's Life of Northcliffe. The same might be said of Westlake's Life of Kinnock. No one can blame the author. In respect of length, at any rate, most authors do what publishers tell them. There is now a fashion for lengthy biographies of public figures, in one volume rather than in two or more, whether brought out simultaneously or at intervals. It would be ridiculous to publish three volumes: Kinnock: The Years of Promise, followed by The Years of Fame and The Last Phase. He is not even in his last phase yet; or so one hopes. But it is equally indefensible to produce a volume, whose comfortable handling requires the wrists of a middleweight boxer, about a former Leader of the Opposition who will he 60 next birthday.

Neil Kinnock was the only child of a district nurse and a coal-miner, later a steelworker. of Scottish descent. He was brought up in Tredegar — Aneurin Bevan country — loved by his parents and by a whole front parlour of uncles and aunties. His mother, as so often happens, was the dominant influence, imbuing or trying to imbue into young Neil the virtues of honesty, truthfulness and industry. She was only partly successful. For Neil was not a great one for his books. He still managed to pass the examination which admitted him to Lewis School, Pengam, confidently described by Mr Westlake as `the best grammar school in South Wales'. Barry Grammar School and Cardiff High School, not to mention other establishments further to the west, might have had something to say about that. Perhaps Mr Westlake was following Lloyd George, who once described the school as 'the Eton of Wales'. The truth is that it was one of those few single-sex Welsh grammar schools which tried to ape the English public schools, with an emphasis on canes, prefects and blazers. No wonder Kinnock was discontented there. He would, as Mr Westlake suggests, have been happier at the more modest Tredegar Grammar School, which he could also have entered and which possessed the additional advantage of being nearer his home.

At Pengam, Mr Westlake tells us, his ambition was to be a miner. It is not clear to me whether this was a settled view of his future or something intended to provoke the authorities. If the latter, it was understandable. If, however, Kinnock really wanted to be a miner, he was off his head: the more so in view of his own vicarious knowledge of the hellish nature of the work involved. My own father (1894-1980) spent some of his time, both as a teacher and in retirement, advising young men on how to avoid going into the pits or, once they were in them, on how to get out. Kinnock sensibly acquired some creditable A-levels and went to Cardiff University instead. There he met the attractive Glenys Parry, from a Labour family in Anglesey (or Ynys Mon, as the Welsh-language-crazed boundary commissioners insist we call it). They formed a touching and a tough partnership which endures to this day. Kinnock spent most of his time on student politics, and ended up after five years with a pass degree in industrial relations.

Almost immediately after entering the Commons at 28, Kinnock became the Most Popular Boy in the School, his only rival in this respect being John Biffen. Admittedly he could be irritating: for instance, by addressing all and sundry as 'wuss' (an English-speaking south-Walean version of gnus, or servant, in this connection living-in farm labourer). But on the whole he was fresh, original, with a genuine wit. A Tory once yelled across the Chamber, 'And what did you ever do for your country?' Kinnock replied, 'I went without bananas for my country.' an episode not recounted by Mr Westlake.

episodes in Labour politics, though few see it as such. Then as now, his succession to Michael Foot was seen as somehow inevitable, though there was no rational reason why it should have been so regarded. True, Tony Benn had lost his Bristol seat at the election, so he could not have stood. Under the new, corrupt system of electing the leader — first used in 1983 — Benn would almost certainly have won. Denis Healey was 66 but still in Parliament. It is more doubtful whether he would have won. But the curious thing is that he did not try; did not, according to his own memoirs, even think of trying. Almost certainly Mr Foot was forced out by the late Clive Jenkins some months before he wanted to go. As his biographer Mervyn Jones put it: as Jenkins had stage-managed his arrival, he saw no reason why he should not stagemanage his departure as well. In 1983 Jenkins's fellow' conspirator, the tradeunion leader David Basnett, said that the party should 'skip a generation', a phrase that caught on. Mr Westlake does not, as far as I can see — for my review copy was defective — reproduce this phrase.

As leader, Kinnock changed. The almost casual clothes in autumnal tints were replaced by a dark blue, double-breasted, off-the-peg suit, a white shirt and a striped tie which on inquiry proved to be that of the University of Wales. He looked like your friendly local bank manager. He became less funny too. I. with others, had always assumed that the new, grave Kinnock was the product of his advisers, such as Charles Clarke, John Eatwell and Patricia Hewitt. Oddly, perhaps, Mr Westlake talked to none of these in the preparation of his book. What is even odder, to me at any rate, is that according to him the decision to turn serious was entirely Kinnock's own. This comes from Kinnock himself. If so, he threw away what some would call his unique selling-point.

Mr Westlake is adept at setting up what he calls 'myths' and then promptly knocking them over. One is that Kinnock was poor in the House. But so he was, most of the time, not only over the miners' strike — where he allowed himself to he distracted by the violence instead of sticking to the need for a ballot — but over the Westland affair as well. He never got on equal terms with Margaret Thatcher. Likewise, Mr Westlake dismisses the Sheffield rally of 1992 as another `myth': whereas John Naughton, the then television critic of the Observer, wrote at the time that he had just seen Kinnock lose Labour the election.

Mr Westlake has been enormously industrious. He has dug up several curious objects which are new to me but nonetheless do not change many of the views I held previously. His book is 'All you ever wanted to know about Neil Kinnock but never really thought it worth bothering to ask'. At times, indeed, he has contrived to turn Kinnock into a bore, which, with all his faults, is something he has never been.