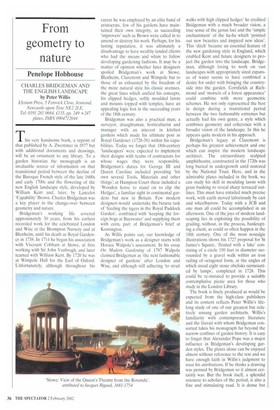 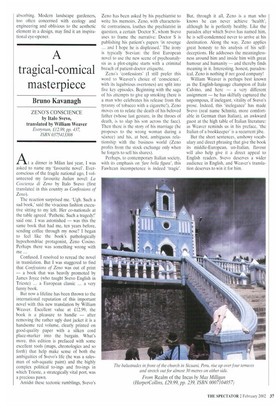 From geometry to nature

CHARLES BRIDGEMAN AND THE ENGLISH LANDSCAPE by Peter Willis Elysium Press, 5 Fen wick Close, Jesmond, Newcastle upon Tyne NE2 2LE, Tel: 0191 281 0684, £135, pp. 249 +247 plates, ISBN 0904712044 This very handsome book, a reprint of that published by A. Zwemmer in 1977 but with additional documents and drawings, will be an ornament to any library. To a garden historian the monograph is an invaluable source of information on that transitional period between the decline of the Baroque French style of the late 1600s and early 1700s and the flowering of the new English landscape style, developed by William Kent and, later, by Lancelot 'Capability' Brown, Charles Bridgeman was a key player in the change-over between geometry and nature.

Bridgeman's working life covered approximately 30 years, from his earliest recorded work for the celebrated London and Wise at the Brompton Nursery and at Blenheim, until his death as Royal Gardener in 1738. In 1714 he began his association with Viscount Cobham at Stowe, at first working with Sir John Vanbrugh, and later teamed with William Kent. By 1720 he was at Wimpole Hall for the Earl of Oxford. Unfortunately, although throughout his

career he was employed by an elite band of aristocrats, few of his gardens have maintained their own integrity, as succeeding 'improvers' such as Brown were called in to amend or destroy his work. Perhaps, for his lasting reputation, it was ultimately a disadvantage to have wealthy landed clients who had the means and whim to follow developing gardening fashions. It may be a matter of opinion whether later designers spoiled Bridgeman's work at Stowe, Blenheim, Claremont and Wimpole but to those of us exhausted by the freedom of the more natural style his classic avenues, the great lines which unified his concepts, his clipped hedges, softly moulded lawns and mounts topped with temples, have an appealing logic lost in the succeeding years of the 18th century.

Bridgeman was also a practical man; a surveyor, draughtsman, horticulturist and manager with an interest in kitchen gardens which made his ultimate post as Royal Gardener (1728-38) within his capabilities. Today we forget that 18th-century `landscapers' were expected to implement their designs with teams of contractors for whose wages they were responsible. Bridgeman's duties for George III and Queen Caroline included providing 'his own several Tools, Materials and other things'; at Hampton Court these included a 'Wooden horse to stand on to clip the Hedges', a familiar sight in continental gardens but new in Britain. Few modern designers would undertake the bizarre task of 'feeding the tigers in the Royal Paddock Garden', combined with 'keeping the foreign hogs at Bayswater' and supplying them with corn, part of Bridgeman's brief at Kensington.

As Willis points out, our knowledge of Bridgeman's work as a designer starts with Horace Walpole's assessment. In his essay On Modern Gardening of 1787 Walpole claimed Bridgeman as the next fashionable designer of gardens' after London and Wise, and although still adhering 'to strait walks with high clipped hedges' he credited Bridgeman with a much broader vision, a true sense of the genus loci and the 'simple enchantment' of the ha-ha which 'pointed out new beauties and inspired new ideas'. This 'ditch' became an essential feature of the new gardening style in England, which enabled Kent and future designers to project the garden into the landscape. Bridgeman, although loving to work on vast landscapes with appropriately sized expanses of water seems to have combined a desire for order with bringing the countryside into the garden. Cornfields at Richmond and 'morsels of a forest appearance' could combine with more geometric schemes. He not only represented the best in design during a transitional period between the two fashionable extremes but actually had his own genre, a style which combines geometry and coherence with a broader vision of the landscape. In this he appears quite modern in his approach.

Bridgeman's legacy at Claremont is perhaps his greatest achievement and one which can inspire the modern landscape architect. The extraordinary sculpted amphitheatre, constructed in the 1720s was long buried in undergrowth until restored by the National Trust. Here, and in the admirable plates included in the book, we can study his skill in moulding lawns with grass banking to reveal sharp terraced outlines. This must have entailed much precise work, with earth moved laboriously by cart and wheelbarrow. Today with a JCB and one man all could be accomplished in an afternoon. One of the joys of modern landscaping lies in exploiting the possibility of grading, without, in the process, bankrupting a client, as could so often happen in the 18th century. One of the most nostalgic illustrations shows his 1727 proposal for St James's Square, 'floated with a lake' consisting of a circle 150 feet in diameter surrounded by a gravel walk within an iron railing of octagonal form, at the angles of which stood eight stone obelisks surmounted by lamps', completed in 1728. This could be re-instated to provide a suitably contemplative picnic area for those who study in the London Library.

The book is finely produced as would be expected from the high-class publishers and its content reflects Peter Willis's lifelong study of one of our greatest but relatively unsung garden architects. Willis's familiarity with contemporary literature and the literati with whom Bridgeman consorted takes his monograph far beyond the narrow confines of garden history. It is easy to forget that Alexander Pope was a major influence in Bridgeman's developing garden styles. The plates alone can be enjoyed almost without reference to the text and we have enough faith in Willis's judgment to trust his attributions. If he thinks a drawing was penned by Bridgeman so it almost certainly was. But the book itself, a splendid resource to scholars of the period, is also a fine and stimulating read. It is dense but absorbing. Modern landscape gardeners, too often concerned with ecology and engineering and oblivious to the aesthetic element in a design, may find it an inspirational eye-opener.