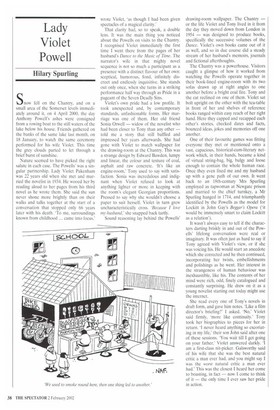 S now fell on the Chantry, and on a small area of the Somerset levels immediately around it, on 4 April 2000, the day Anthony Powell's ashes were consigned from a rowing boat to the still waters of the lake below his house. Friends gathered on the banks of the same lake last month, on 18 January, to watch the same ceremony performed for his wife Violet. This time the grey clouds parted to let through a brief burst of sunshine.

Nature seemed to have picked the right salute in each case. The Powells' was a singular partnership. Lady Violet Pakenham was 22 years old when she met and married the novelist in 1934. He wooed her by reading aloud to her pages from his third novel as he wrote them. She said the sun never shone more brightly than on their walks and talks together at the start of a conversation that stopped only 66 years later with his death. To me, surroundings known from childhood ... came into focus,'

wrote Violet, -as though I had been given spectacles of a magical clarity.'

That clarity had, so to speak, a double lens. It was the main thing you noticed about the Powells on visits to the Chantry. I recognised Violet immediately the first time I went there from the pages of her husband's Dance to the Music of Time. The narrator's wife in that mighty novel sequence is not so much a participant as a presence with a distinct flavour of her own: sceptical, humorous, fond, infinitely discreet and endlessly inquisitive. She stands Out only once, when she turns in a striking performance half way through as Pride in a pageant of the Seven Deadly Sins.

Violet's own pride had a low profile. It took unexpected and, by contemporary standards, unfashionable forms. Her marriage was one of them. Her old friend Sonia Orwell — widow of the novelist who had been closer to Tony than any other — told me a story that still baffled and impressed her years afterwards. She had gone with Violet to match wallpaper for the drawing-room at the Chantry. This was a strange design by Edward Bawden, lumpy and linear, the colour and texture of coal, asphalt and raw concrete. 'It's like an engine-room,' Tony used to say with satisfaction. Sonia was incredulous and indignant when Violet refused to look at anything lighter or more in keeping with the room's elegant Georgian proportions. Pressed to say why she wouldn't choose a paper to suit herself, Violet in turn grew uncharacteristically cross. 'Because I love my husband,' she snapped back tartly.

Sound reasoning lay behind the Powells' drawing-room wallpaper. The Chantry — or the life Violet and Tony lived in it from the day they moved down from London in 1954 — was designed to produce books, specifically the successive volumes of the Dance. Violet's own books came out of it as well, and so in due course did a steady stream of her husband's memoirs, journals and fictional afterthoughts.

The Chanty was a powerhouse. Visitors caught a glimpse of how it worked from watching the Powells operate together in their book-lined engine-room with its two sofas drawn up at right angles to one another before a bright coal fire. Tony and the cat reclined on one of them. Violet sat bolt upright on the other with the tea-table in front of her and shelves of reference books ranged within easy reach of her right hand. Here they capped and recapped each other's stories, checked dates and facts, bounced ideas, jokes and memories off one another.

One of their favourite games was fitting everyone they met or mentioned onto a vast, capacious, historical-cum-literary network which, in their hands, became a kind of virtual string-bag, big, bulgy and loose enough to contain the whole human race. Once they even fixed me and my husband up with a gene path of our own. It went back to an 18th-century Mrs Spurling employed as tapwoman at Newgate prison and married to the chief turnkey, a Mr Spurling hanged in 1714, and triumphantly identified by the Powells as the model for Lockitt in John Gay's Beggar's Opera ('it would be immensely smart to claim Lockitt as a relation').

It wasn't always easy to tell if the characters darting briskly in and out of the Powells' lifelong conversation were real or imaginary. It was often just as hard to say if Tony agreed with Violet's view, or if she was voicing his. He would start an anecdote which she corrected and he then continued, incorporating her twists, embellishments and polishings as he went. Her interest in the strangeness of human behaviour was inexhaustible, like his. The contents of her mind were rich, odd, finely catalogued and constantly surprising. He drew on it as a young novelist starting out today might use the internet.

She read every one of Tony's novels in draft form, and gave him notes. 'Like a film director's briefing?' I asked. 'No,' Violet said firmly, 'more like continuity.' Tony took her biographies to pieces for her in return. 'I never heard anything so excoriating in my life,' their son John said after one of these sessions. 'You wait till I get going on your father,' Violet answered darkly. 'I am a first-class nit-picker. Galsworthy said of his wife that she was the best natural critic a man ever had, and you might say I was the worst natural critic a man ever had.' This was the closest I heard her come to boasting, in fact — now I come to think of it — the only time I ever saw her pride in action.