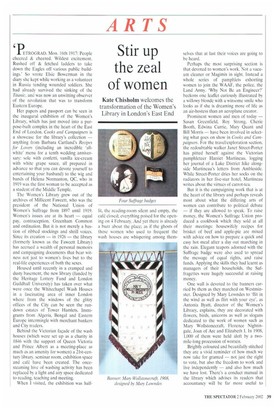 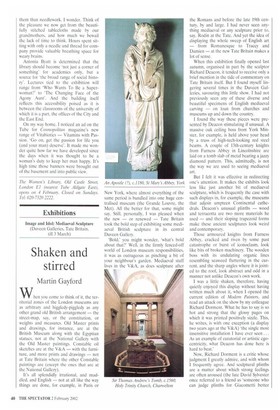 Stir up the zeal of women

Kate Chisholm welcomes the transformation of the Women's Library in London's East End PETROGRAD. Mon. 16th 1917: People cheered & cheered. Wildest excitement. Rushed off & fetched ladders to take down the Eagles off various public buildings.' So wrote Elsie Bowerman in the diary she kept while working as a volunteer in Russia tending wounded soldiers. She had already survived the sinking of the Titanic, and was now an unwitting observer of the revolution that was to transform Eastern Europe.

Her papers and passport can be seen in the inaugural exhibition of the Women's Library, which has just moved into a purpose-built complex in the heart of the East End of London. Cooks and Campaigners is a showcase for the library's collection — anything from Barbara Cartland's Recipes for Lovers (including an incredible 'allwhite' menu for a tenth wedding anniversary: sole with confetti, vanilla ice-cream with white grape sauce, all prepared in advance so that you can devote yourself to entertaining your husband) to the wig and bands of Helena Normanton, QC, who in 1919 was the first woman to be accepted as a student of the Middle Temple.

The Women's Library grew out of the archives of Millicent Fawcett, who was the president of the National Union of Women's Suffrage from 1897 until 1919. Women's issues are at its heart — equal pay, contraception, Greenham Common and ordination. But it is not merely a bastion of ribbed stockings and shrill voices. Since its creation — in 1926 — the library (formerly known as the Fawcett Library) has accrued a wealth of personal memoirs and campaigning documents that bear witness not just to women's lives but to the real-life experiences of both the sexes.

Housed until recently in a cramped and dusty basement, the new library (funded by the Heritage Lottery Fund and London Guildhall University) has taken over what were once the Whitechapel Wash Houses in a fascinating area of inner London where from the windows of the glitzy offices of the City can be seen the rundown estates of Tower Hamlets. Immigrants from Algeria, Bengal and Eastern Europe intermingle with merchant bankers and City traders.

Behind the Victorian facade of the wash houses (which were set up as a charity in 1846 with the support of Queen Victoria and Prince Albert as a meeting-place as much as an amenity for women) a 21st-century library, seminar room, exhibition space and café have been created. The oncesteaming hive of washing activity has been replaced by a light and airy space dedicated to reading, teaching and meeting.

When I visited, the exhibition was half lit, the reading-room silent and empty, the café closed; everything poised for the opening on 4 February. And yet there is already a buzz about the place; as if the ghosts of those women who used to frequent the wash houses are whispering among them selves that at last their voices are going to be heard.

Perhaps the most surprising section is that devoted to women's work. Not a vacuum cleaner or Magimix in sight. Instead a whole series of pamphlets exhorting women to join the WAAF, the police, the Land Army. 'Why Not Be an Engineer?' beckons one leaflet curiously illustrated by a willowy blonde with a winsome smile who looks as if she is dreaming more of life as an air-hostess than an aeroplane creator.

Bill Morris have been involved in selecting what goes on show in Cooks and Campaigners. For the travel/exploration section, the redoubtable walker Janet Street-Porter has pitted herself against the Victorian pamphleteer Harriet Martineau, logging her journal of a Lake District hike alongside Martineau's letters from Ambleside. While Street-Porter dries her socks on the radiators in her five-star hotel, Martineau writes about the virtues of carrot-tea.

But it is the campaigning work that is at the heart of the library and perhaps reveals most about what the differing arts of women can contribute to political debate — if they are allowed to speak. To raise money, the Women's Suffrage Union produced a cookbook which they sold at all their meetings: housewifely recipes for brisket of beef and apple-pie are mixed with advice on how to prepare a quick and easy hot meal after a day out marching in the rain. Elegant teapots adorned with the Suffrage badge were also used to spread the message of equal rights, and raise funds. Applying the skills they had learnt as managers of their households, the Suffragettes were hugely successful at raising money.

One wall is devoted to the banners carried by them as they marched on Westminster. Designed by Mary Lowndes to 'flit in the wind as well as flirt with your eye', as Antonia Byatt, director of the Women's Library, explains, they are decorated with flowers, birds, unicorns as well as slogans dedicated to the work of women such as Mary Wollstonecraft, Florence Nightingale, Joan of Arc and Elizabeth I. In 1908, 1,000 of them were held aloft by a twomile-long procession of women.

Brightly coloured and beautifully stitched they are a vivid reminder of how much we now take for granted — not just the right to vote, but also the freedom to work and live independently — and also how much we have lost. There's a conduct manual in the library which advises its readers that accountancy will be far more useful to them than needlework. I wonder. Think of the pleasure we now get from the beautifully stitched tablecloths made by our grandmothers, and how much we bewail the lack of time to think. Hours spent sitting with only a needle and thread for company provide valuable breathing space for weary brains.

Antonia Byatt is determined that the library should become 'not just a corner of something' for academics only, but a source for 'the broad range of social history'. Lectures tied to the exhibition will range from 'Who Wants To Be a Superwoman?' to 'The Changing Face of the Agony Aunt'. And the building itself reflects this accessibility poised as it is between the classrooms of the university of which it is a part, the offices of the City and the East End.

On my way home, I noticed an ad on the Tube for Cosmopolitan magazine's new range of Vitabiotics — Vitamins with Passion. 'Go on, get the passion for life you (and your man) deserve'. It made me wonder quite how far we have developed since the days when it was thought to be a woman's duty to keep her man happy. It's high time those banners were brought out of the basement and into public view.