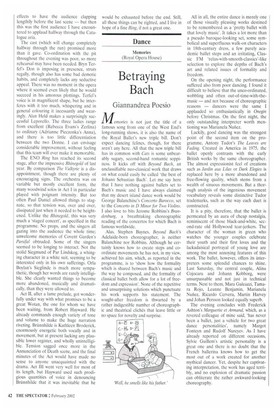 Memories is not just the title of a famous song from one of the West End's long-running shows, it is also the name of the Royal Ballet's new triple bill. Don't expect dancing felines, though, for there aren't any here. All that the new triple bill has in common with Cats is some unbearably sugary, second-hand romantic soppiness. It kicks off with Beyond Bach, an unclassifiable neo-classical work that draws on what could easily be called 'the best of Johann Sebastian Bach'. Let me say here that I have nothing against ballets set to Bach's music and I have always claimed that my desert island dance work would be George Balanchine's Concerto Barocco, set to the Concerto in D Minor for Two Violins. I also love to bits Jerome Robbins's Brandenburg, a breathtaking choreographic reading of the concertos for which Bach is famous worldwide.

Alas, Stephen Baynes, Beyond Bach's Adelaide-born choreographer, is neither Balanchine nor Robbins. Although he certainly knows how to create steps and coordinate movements he has not, in my view, achieved his aim, which, as reported in the programme, is to 'show how the formality which is shared between Bach's music and the way he composed, and the formality of classical ballet both allow for a lot of freedom and expression'. None of the repetitive and unsurprising solutions which punctuate his work supports his statement. The sought-after freedom is thwarted by a rather indigestible number of choreographic and theatrical clichés that leave little or no space for novelty and surprise.

All in all, the entire dance is merely one of those visually pleasing works destined to be remembered as a 'pretty ballet with that lovely music'. It takes a lot more than a pseudo baroque-looking set, some symbolical and superfluous walk-on characters in 18th-century dress, a few purely academic ballet steps and an irritating, Classic FM 'relax-with-smooth-classics'-like selection to explore the depths of Bach's art and related issues of formality and freedom.

On the opening night, the performance suffered also from poor dancing. I found it difficult to believe that the unco-ordinated, wobbling and often out-of-time-with-themusic — and not because of choreographic reasons — dancers were the same I applauded so enthusiastically in Onegin before Christmas. On the first night, the only outstanding interpreter worth mentioning was Marianela Nunez.

Luckily, good dancing was the strongest point of the second item on the programme, Antony Tudor's The Leaves are Fading. Created in America in 1975, the ballet openly contrasts with the early British works by the same choreographer. The almost expressionist feel of creations such as Jardin aux Lilas or Dark Elegies is replaced here by a more abandoned and free-flowing quality, which stems from a wealth of sinuous movements. But a thorough analysis of the ingenious movement vocabulary reveals some distinctive Tudor trademarks, such as the way each duet is constructed.

It is a pity, therefore, that the ballet is permeated by an aura of cheap nostalgia, reminiscent of those black-and-white, second-rate old Hollywood tear-jerkers. The character of the woman in green who watches the younger couples celebrate their youth and their first loves and the lackadaisical portrayal of young love are among the most annoying features of this work. The ballet, however, offers its interpreters some splendid chances to shine. Last Saturday, the central couple, Alina Cojocaru and Johann Kobborg, were unsurpassable and not just in technical terms. Next to them, Mara Galeazzi, Tamara Rojo, Leanne Benjamin, Marianela Nunez, Ricardo Cervera, Martin Harvey and Johan Persson looked equally superb.

The evening concludes with Frederick Ashton's Marguerite et Armand, which, as a revered colleague of mine said, 'has never been a ballet, just a vehicle for two great dance personalities', namely Margot Fonteyn and Rudolf Nureyev. As I have already reported on different occasions, Sylvie Guillem's artistic personality is a great one and there is no doubt that the French ballerina knows how to get the most out of a work created for another mythical dancer. Yet, despite her captivating interpretation, the work has aged terribly, and no explosion of dramatic passion can obliterate the rather awkward-looking choreography.