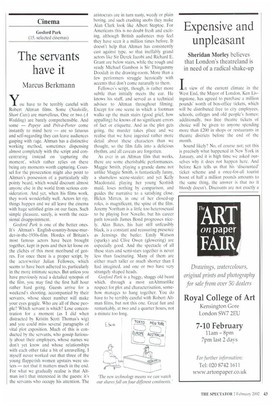 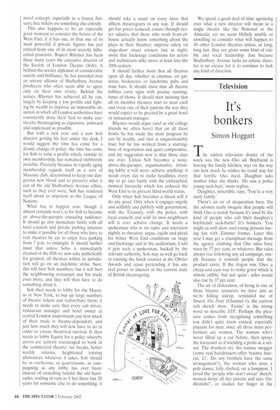 In view of the current climate in the West End, the Mayor of London, Ken Livingstone, has agreed to purchase a million pounds' worth of box-office tickets, which will be distributed free to city employees, schools, colleges and old people's homes: additionally, two free theatre tickets of choice will be given to anyone spending more than 1200 in shops or restaurants in theatre districts before the end of the month.

Sound likely? No, of course not; yet this is precisely what happened in New York in January, and it is high time we asked ourselves why it does not happen here. And before Ken tells us that his 'discounted' ticket scheme and a once-for-all tourist boost of half a million pounds amounts to the same thing, the answer is that no it bloody doesn't. Discounts are not exactly a novel concept, especially in a frozen January; free tickets are something else entirely.

This also happens to be an especially good moment to consider the future of the West End, if it has one, in that one of its most powerful if private figures has just retired from one of its most secretly influential positions. Rupert Rhymes has been these many years the executive director of the Society of London Theatre (Solt). A behind-the-scenes diplomat of considerable suavity and brilliance, he has presided over an uneasy alliance of Shaftesbury Avenue producers who often seem able to agree only on their own rivalry. Behind the scenes, Rhymes has achieved all he can, largely by keeping a low profile and fighting by stealth to improve an impossible situation in which all London authorities have consistently done their best to make centre-citytheatregoing as expensive, awkward and unpleasant as possible.

But with a new year and a new Solt director getting his feet under the desk, I would suggest the time has come for a drastic change of policy: the time has come for Solt to raise a profile which, outside its own membership, has remained stubbornly invisible. Precisely because its rapidly aging membership regards itself as a sort of Masonic club, determined to keep out dangerous new blood and to preserve what it can of the old Shaftesbury Avenue ethics, such as they ever were, Solt has rendered itself about as impotent as the League of Nations.

What has to happen now, though it almost certainly won't, is for Solt to become an above-the-parapet crusading taskforce. It should go into immediate battle with all local councils and private parking interests to make it possible for all those who have to visit theatres by car to enjoy free parking from 7 p.m. to midnight. It should further insist that unless Soho is immediately cleaned of the filth we now take pathetically for granted, all theatres within its jurisdiction will go on an indefinite strike. Sure, this will hurt Soft members; but it will hurt the neighbouring restaurant and bar trade even more, and they will then have to do something about it.

Solt then needs to lobby for the Mayor, as in New York, to buy up large numbers of theatre tickets and redistribute them; it needs to make sure that every cab driver, restaurant manager and hotel owner in central London understands just how much of their trade is theatre-dependent, and just how much they will now have to do in order to ensure theatrical survival. It then needs to lobby Equity for a policy whereby actors are actively encouraged to work in the commercial theatre: tax breaks, better weekly salaries, heightened touring allowances, whatever it takes. Solt should be as vociferous, as quarrelsome, as campaigning as any lobby has ever been: instead of crouching behind the old barricades, waiting in vain as it has these last 20 years for someone else to do something, it should take a stand on every issue that affects theatregoers in any way. It should get bar prices reduced; ensure through better salaries that those who work front-ofhouse actually know something about the plays in their theatres; improve safety on stage-door street corners late at night; insist that backstage conditions for actors and technicians alike move at least into the 20th century.

It should further insist that all theatres open all day, whether as cinemas, art galleries, bookstores or lunchtime pubs and wine bars. It should insist that all theatre lobbies carry signs with precise runningtimes of shows. It should start insisting that all its member theatres start to treat each and every one of their patrons the way they would expect to be greeted by a great hotel or restaurant manager.

Rhymes would argue (and as old college friends we often have) that on all these fronts he has made the most progress he can by stealth, and that is unquestionably true; but he has worked from a startingbase of negotiation and quiet compromise, and my suggestion now is that those days are over. Unless Solt becomes a noisy, above-the-parapet, argumentative, irritating lobby it will never achieve anything: it needs every day to make headlines, every day to go into battle with the entrenched, inimical hierarchy which has reduced the West End to its present third-world status.

Only when Solt becomes a threat will it do any good. Only when it engages angrily and selfishly and publicly with government, with the Treasury, with the police, with local councils and with its own neighbours will it ever achieve change. It needs a spokesman who is on radio and television nightly to threaten, argue, cajole and plead for better West End conditions on stage and backstage and in the auditorium. Until it gets such a spokesman, backed by the relevant authority, Solt may as well go back to running the lunch counter at the Olivier Awards and cease pretending it has any real power or interest in the current state of British theatregoing. We spend a good deal of time agonising over what a new director will mean to a single theatre like the National or the Almeida; yet we seem blithely unable or unwilling to consider what will happen to 30 other London theatres unless, at long, long last, they are given some kind of visible and vocal leadership. Just because Shaftesbury Avenue lacks an artistic director is no excuse for it to continue to lack any kind of direction.