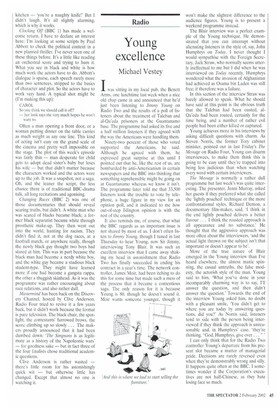 Iwas sitting in my local pub, the Benett Arms, one lunchtime last week when a nice old chap came in and announced that he'd just been listening to Jimmy Young on Radio Two and the results of a poll of listeners about the treatment of Taleban and al-Qa'eda prisoners at the Guantanamo base. The programme had asked its five and a half million listeners if they agreed with the way the Americans were handling them.

Ninety-two percent of those who voted supported the Americans, he said. Although he agreed with them, he expressed great surprise at this until I pointed out that he, like the rest of us, are bombarded by anti-Americanism in certain newspapers and the BBC into thinking that something reprehensible might be going on at Guantanamo whereas we know it isn't. The programme later told me that 33,500 listeners took the trouble to vote by telephone, a huge figure in my view for an opinion poll, and it indicated to me how out-of-step Islington opinion is with the rest of the country.

It also reminds me, of course, that what the BBC regards as an important issue is not shared by most of us. I don't often listen to Jimmy Young, though I tuned in last Thursday to hear Young. now Sir Jimmy, interviewing Tony Blair. It was such an excellent interview that I came away shaking my head in astonishment that Radio Two has finally succeeded in ending his contract in a year's time. The network controller, James Moir, had been itching to do this for some time but made such a mess of the process that it became a contentious saga. The only reason for it is because Young is SO, though he doesn't sound it. Moir wants someone younger, though it won't make the slightest difference to the audience figures. Young is to present a weekend programme instead.

The Blair interview was a perfect example of the Young technique. He demonstrated that you can interrupt without alienating listeners in the style of, say, John Humphrys on Today. I never thought I would sympathise with the Foreign Secretary, Jack Straw, who normally seems utterly ineffectual to me but I did when he was interviewed on Today recently. Humphrys wondered what the invasion of Afghanistan had achieved as Osama bin Laden was still free; it therefore was a failure.

In this section of the interview Straw was barely allowed to speak. What he should have said at this point is the obvious truth that the Taleban had been ousted, alQa'eda had been routed, certainly for the time being, and a number of rather evil people had been either killed or captured.

Young achieves more in his interviews by asking difficult questions with charm. As Steven Norris, the former Tory cabinet minister, pointed out in last Friday's The Message on Radio Four, Young can disarm interviewees, to make them think this is going to be easy until they're trapped into being less judicious than when watching every word with certain interviewers.

The Message is normally a rather dull programme but last week's was quite interesting. The presenter, Jenni Murray, asked her guests if they preferred what she called the 'lightly poached' technique or the more confrontational styles. Richard Denton, a documentary film-maker, said, 'I think in the end lightly poached delivers a better flavour . . . I think the roasted approach is all appearance and no substance. He thought that the aggressive approach was more often about the interviewers, 'and the actual light thrown on the subject isn't that important or doesn't appear to be'.

More of the true nature of Blair emerged in the Young interview than I've heard elsewhere, the almost manic spinning, the casual untruths, the false modesty, the actorish style of the man. Young said to him, 'What you've done in your incomparably charming way is to say, answer the question, and then didn't answer the question.' Towards the end of the interview Young asked him, no doubt with a pleasant smile, 'You didn't get to where you are today by answering questions, did you?' As Norris said, listeners tend to side with the person being interviewed if they think the approach is unreasonable and, in Humphrys' case, 'they're thinking, "God, Humphrys, give over . " ' I can only think that for the Radio Two controller Young's departure from his present slot became a matter of managerial pride. Decisions are rarely reversed even when they're demonstrably wrong and silly. It happens quite often at the BBC. I sometimes wonder if the Corporation's executives are not half-Chinese, as they hate losing face so much.