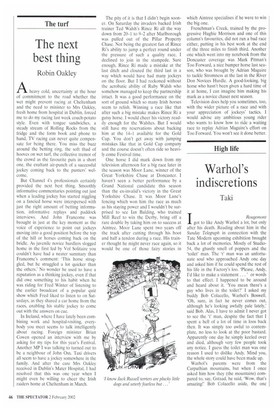 The next best thing

Aheavy cold, uncertainty at the hour of commitment to the road whether the wet might prevent racing at Cheltenham and the need to minister to Mrs Oakley, fresh home from hospital in Dublin, forced me to do my racing last week couch-potato style. Even with tongue sandwiches, a steady stream of Rolling Rocks from the fridge and the form book and phone to hand, TV racing can never quite compensate for being there. You miss the buzz around the betting ring, the soft thud of hooves on wet turf, the collective tremor of the crowd as the favourite puts in a short one, the exultant air-punch of a successful jockey coming back to the punters' welcome.

But Channel 4's professionals certainly provided the next best thing. Smoothly informative commentaries pointing out just when a leading jockey has started niggling on a fancied horse were interspersed with just the right amount of betting information. informative replays and paddock interviews. And John Francome was brought in just at the key moment as the voice of experience to point out jockeys moving into a good position before the top of the hill or horses coming back on the bridle. As juvenile novice hurdlers slogged home in the first led by Vol Solitaire you couldn't have had a neater summary than Francome's comment: This horse struggled, but he struggled a lot quicker than the others.' No wonder he used to have a reputation as a thinking jockey, even if that did owe something to his habit when he was riding for Fred Winter of listening to the earlier broadcast of a popular quiz show which Fred liked to listen to on Saturdays, as they shared a car home from the races, enabling his stable jockey to come out with the answers on cue.

In Ireland, where I have lately been combining work and hospital-visiting, everybody you meet seems to talk intelligently about racing. Foreign minister Brian Cowen opened an interview with me by asking for my tips for this year's Festival. Another MP I was talking to turned out to be a neighbour of John Ox.x. Taxi drivers all seem to have a jockey somewhere in the family. And after the care Mrs Oakley received in Dublin's Mater Hospital, I had resolved that this was one year when I might even be willing to cheer the Irish raiders home at Cheltenham in March. The pity of it is that I didn't begin sooner. On Saturday the invaders backed Irish trainer Ted Walsh's Rince Ri all the way down from 20-1 to 9-2 after Marlborough was pulled out of the Pillar Property Chase. Not being the greatest fan of Rince Ri's ability to jump a perfect round under the pressure of such a quality race, I declined to join in the stampede. Sure enough. Rince Ri made a mistake at the last ditch and clouted the third last in a way which would have had many jockeys on the floor. But I had reckoned without the acrobatic ability of Ruby Walsh who somehow managed to keep the partnership intact. It was a good performance on the sort of ground which so many Irish horses seem to relish. Winning a race like that after such a big mistake makes Rince Ri a gutsy horse. I would cheer his victory readily enough for the Walshes. But I would still have my reservations about backing him at the 14-1 available for the Gold Cup. You don't get away with jumping mistakes like that in Gold Cup company and the course doesn't often ride so heavily come Festival time.

One horse I did mark down from my television afternoon for a big race later in the season was Moor Lane, winner of the Great Yorkshire Chase at Doncaster. I haven't seen a better performance by a Grand National candidate this season than the ex-invalid's victory in the Great Yorkshire Chase. It was Moor Lane's fencing which won him the race as much as his staying power and I wouldn't be surprised to see Ian Balding, who trained Mill Reef to win the Derby, bring off a rare double by taking him on to success at Aintree. Moor Lane spent two years off the track after cutting through his boot and half a tendon during a race. His trainer thought he might never race again, so it would be one of those fairy stories in which Aintree specialises if he were to win the big one.

Frenchman's Creek, trained by the progressive Hughie Morrison and one of this column's favourites, did not run a bad race either, putting in his best work at the end of the three miles to finish third. Another one which went into my notebook from the Doncaster coverage was Mark Pitman's Too Forward, a nice bumper horse last season, who was brought by Adrian Maguire to tackle Stromness at the last in the River Don Novices Hurdle. A good-looking, big horse who hasn't been given a hard time of it at home, I can imagine him making his mark as a novice chaser next season.

Television does help you sometimes, too, with the wider picture of a race and with your appreciation of jockeys' tactics. I would advise any ambitious young rider who wants to know how to ride a waiting race to replay Adrian Maguire's effort on Too Forward. You won't see it done better.