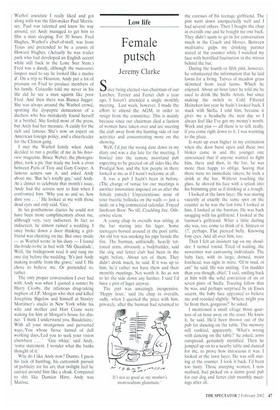 Since being elected vice-chairman of our Lurcher, Terrier and Ferret club a year ago, I haven't attended a single monthly meeting. Last week, however, I made the effort to attend the AGM, in order to resign from the committee. This is mainly because since our chairman died a faction of women have taken over and are steering the club away from the hunting side of our activities and concentrating more on the showing.

Well, I'd put the wrong date down in my diary and was a day late for the meeting. I bowled into the remote moorland pub expecting to be greeted on all sides like the Prodigal Son, and the few people in there looked at me as if I wasn't welcome at all.

It was a pub I hadn't been in before. (The change of venue for our meetings is another innovation imposed on us after the female putsch.) Unpretentious: none of your bucolic bollocks on the walls — just a nude on a big commercial calendar, Frayed linoleum floor. No till. Crackling fire. Otherwise silent.

A young chap in overalls was sitting at the bar staring into his lager. Some teenagers horsed around at the pool table, An old boy was smoking his pipe beside the fire. The barman, unfriendly, heavily tattooed arms, obviously a bodybuilder, said the dog and ferret club had been in the night before. About ten of them. They didn't drink much, he said. If it was up to him, he'd rather not have them and their monthly meetings. Not worth it, So as not to let the side down any further, I said I'd have a pint of lager anyway.

The pint was amazingly inexpensive. 'Happy hour,' said the chap in overalls, sadly, when I queried the price with him, privately, after the barman had returned to the caresses of his teenage girlfriend. The pint went down unexpectedly well and I had several others. Then I bought the chap in overalls one and he bought me one back. They didn't seem to go in for conversation much in the Coach and Horses. Between meditative gulps my drinking partner stared at the counter while I watched my face with horrified fascination in the mirror behind the bar.

During the fourth or fifth pint, however, he volunteered the information that he laid lawns for a living. Turves of meadow grass skimmed from local farms. Which he enjoyed. About an hour later he told me he used to drink the Stella Artois, but since making the switch to Cold Filtered Heineken last year he hadn't looked back. I stuck with Stella. I told him, because it gives me a headache the next day so I always feel like I've got my money's worth. Work and piss — all there is to tell, really, if you come right down to it. I was warming to the place.

It went up even higher in my estimation when the door burst open and these two blokes came in and the younger one announced that if anyone wanted to fight him, there and then, in the bar, he was more than happy to oblige. Seeing that there were no immediate takers, he took a drink at the bar. Without touching the glass, he shoved his face with a splash into his brimming pint as if drinking at a trough.

Then I felt an insistent tap on my shoulder. [turned round. Tired of waiting, the newcomer was canvassing individuals. The baby face, with its large, domed, moist forehead, was right in mine, `Oi'm mad, oi am!' he said. He was smiling. 'I'm madder than you though, chief,' I said, smiling back at him with the solid conviction of six or seven pints of Stella. Trusting fellow that he was, and perhaps surprised by an Essex accent, the baby face appeared to believe me and receded slightly. 'Where might you be from then, gorgeous?' he asked.

I mentioned a small village three quarters of an hour away on the coast. He knew it, he said. He'd been thrown out of the pub for dancing on the table. The memory still rankled, apparently. 'What's wrong with dancing on the table?' he asked, arms outspread, genuinely mystified. Then he jumped up on to a nearby table and danced for me, to prove how innocuous it was. I looked at the lawn layer. He was still staring at the counter. I took it back. Id been too hasty. Those usurping women, I now realised, had picked on a damn good pub for our dog and ferret club monthly meetings after all,