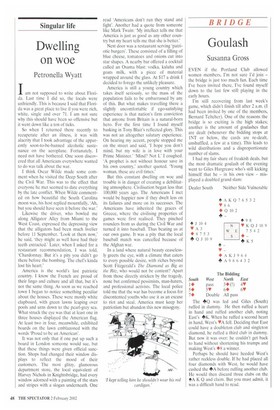 Iam not supposed to write about Florida, Last time I did so, the locals were unfriendly. This is because I said that Florida was a great place to live if you were rich, white, single and over 71. I am not sure why this should have been so offensive but it went down like a ton of ticks.

So when I returned there recently to recuperate after an illness, it was with alacrity that I took advantage of the apparently soon-to-be-banned alcoholic sustenance on the aeroplane. Fortunately, I need not have bothered. One soon discovered that all Americans everywhere wanted to do was talk about the war.

I think Oscar Wilde made some comment when he visited the Deep South after the Civil War. This was to the effect that everyone he met seemed to date everything by the late conflict. When Wilde commented on how beautiful the South Carolina moon was, his host replied mournfully, -Ah, but you should have seen it before the war.'

Likewise the driver, who bowled me along Alligator Alley from Miami to the West Coast, expressed the depressing view that the alligators had been much livelier before 11 September. 'Look at them now,' he said, 'they might as well have had their teeth extracted.' Later, when I asked for a restaurant recommendation, I was told, 'Chardonnay. But it's a pity you didn't go there before the bombing. The chef's kinda lost his heart.'

America is the world's last patriotic country. I know the French are proud of their lingo and culture and all that, but it's not the same thing. As soon as we reached town I began to notice something peculiar about the houses. These were mostly white clapboard, with green lawns leaping over pools and urns down to the pearl-grey sea. What struck the eye was that at least one in three houses displayed the American flag. At least two in four, meanwhile, exhibited boards on the lawn emblazoned with the words 'Proud to be an American'.

It was not only that if one put up such a board in London someone would sue, but that these things were given official sanction. Shops had changed their window displays to reflect the mood of their customers. The most glitzy, glamorous department store, the local equivalent of Harvey Nichols in Knightsbridge, had every window adorned with a painting of the stars and stripes with a slogan underneath. One read 'Americans don't run they stand and fight'. Another had a quote from someone like Mark Twain: 'My intellect tells me that America is just as good as any other country but my heart tells me that she is better.'

Next door was a restaurant serving 'patriotic burgers'. These consisted of a filling of blue cheese, tomatoes and onions cut into star shapes. A nearby bar offered a cocktail called an Osama blast: vodka. kaluha and goats milk, with a piece of material wrapped around the glass. At $17 a drink I decided to forego the unlikely pleasure.

America is still a young country which takes itself seriously, so the mass of the population fails to be embarrassed by any of this. But what makes travelling there a slightly uncomfortable if ego-satisfying experience is that nation's firm conviction that anyone from Britain is a natural-born hero. For the first time I found myself basking in Tony Blair's reflected glory. This was not an altogether salutary experience. On hearing my accent, people stopped me on the street and said, 'I hope you don't mind, but my wife is in love with your Prime Minister."Mind? Not I,' I coughed. 'A prophet is not without honour save in his own country,' another quoted. 'Young woman, these are evil times.'

But this constant dwelling on woe and trouble is in danger of creating a debilitating atmosphere. Civilisation began less that 100,000 years ago. The Americans I met would be happier now if they dwelt less on its failures and more on its successes, The Americans have inherited the graces of Greece, where the civilising properties of games were first realised. They pinched rounders from us during the Civil War and turned it into baseball. Thus beating us at our own game. It was a pity that the local baseball match was cancelled because of the Afghan war.

In a land where natural beauty ceaselessly greets the eye, with a climate that caters to every possible desire, with riches beyond Scott Fitzgerald's The Diamond as Big as the Ritz, who would not be content? Apart from those directly stricken by the tragedy, none but confirmed pessimists, man-haters, and professional activists, The local police told me that the war has become a focus for discontented youths who use it as an excuse to riot and steal. America must keep her patriotism but abandon this new misogyny.