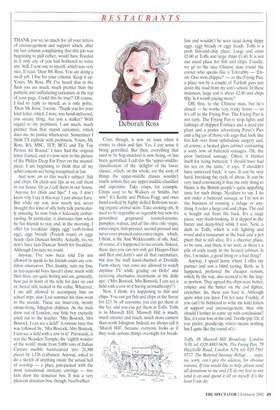 11-TANK you so, so much for all your letters of encouragement and support which, after my last column complaining that this job was beginning to pall rather, would have flooded in if only any of you had bothered to write any, Still, I sent one to myself, which was very nice, It read, 'Dear Ms Ross. You are doing a swell job. I live for your column. Keep it up. Yours, Ms Ross. PS: I've heard that in the flesh you are much, much prettier than the pathetic and unflattering caricature at the top of your page. Could this be true?' Of course, I had to reply to myself, as is only polite. 'Dear Ms Ross,' I wrote. 'Thank you for your kind letter. which, I note, was hand-delivered, you sneaky thing. Are you a stalker? With regard to my prettiness, I am much, much prettier than that stupid caricature, which does me no justice whatsoever. Sometimes I think I'll explode with prettiness. Yours, Ms Ross. BA, MSC, TCP, BCG and Tip Top Person All Round.' I have had the original letter framed, and it's now next to the picture of the Philips Deep Fat Fryer on the mantelpiece. I am beginning to think that all my achievements are being recognised at last.

And now, on to this week's subject: fish and chips. Or chish and fips as we call them in our house. Or as I call them in our house, 'Anyone for chish and fips?' I say. I don't know why I say it this way; I just always have. But while my son, now nearly ten, never thought this kind of silly baby talk particularly amusing, he now finds it hideously embarrassing. In particular. it distresses him when he has friends to stay and, in the morning, I offer for breakfast `dippy eggy' (soft-boiled egg), eggy bready (French toast) or eggy heady (lain Duncan Smith). Actually, no, we don't have lain Duncan Smith for breakfast. Although I'm sure we could.

Anyway, I've now been told I'm not allowed to speak to his friends under any condition whatsoever. This, frankly, suits me fine, as ten-year-old boys haven't done much with their lives, are quite boring and are, generally, best put in front of the telly for days on end or, better still, locked in the cellar. Whatever, I am still allowed to accompany him on school trips, alas, Last summer his class went to the seaside. These are inner-city, mostly estate-living, Islington children. As the train drew out of London, one little boy excitedly cried out to the teacher. 'Mrs Bostock, Mrs Bostock, I can see a field!' A minute later this was followed by, 'Mrs Bostock, Mrs Bostock, I can see a field with a cow in it!' Previously, it was the Neasden Temple, the 'eighth wonder of the world' made from 5.000 tons of Italian Carrara marble hand-carved into 26,300 pieces by 1,526 craftsmen. Anyway, asked to do a sketch of anything inside the actual hall of worship — a place jam-packed with the most sensational, intricate carvings — two kids drew the donation box. It was a very pleasant donation box, though: beech-effect.

Class, though, is now an issue when it comes to chish and fips. Yes, I can sense it being gentrified. But then, everything that used to be bog-standard is now being, or has been, gentrified. I call this the `upper-middleclassification' of the 'delights of the lower classes', which, on the whole, are the sorts of things the upper-middle classes wouldn't touch, unless they are upper-middle-classified and expensive. Take crisps, for example. Crisps used to be Walkers or Smiths, but now? It's Kettle and Phileas Fogg, and ones hand-cooked by highly skilled Bolivians wearing organic animal skins. Take cooking oils. It used to be vegetable or vegetable but now it's groundnut, grapeseed, toasted-sesame, pumpkin, walnut, and all the olive oils: virgin, extra-virgin, first-pressed, second-pressed and never-ever-pressed-extra-extra-virgin, which, I think, is the Ann Widdecombe of oils. And, of course, it's happened to ice-cream. Indeed, these days you can not only get Haagen-Dazs and Ben and Jerry's and all that ra77matazz, but also the stuff hand-churned at Doolally Farm where 'our cows are allowed to watch daytime TV while grazing on Hello! and receiving alternative treatments at the daily spa', (`Mrs Bostock, Mrs Bostock, I can see a field with a cow in it having aromatherapy!') Now. I think, it's happening to fish and chips. You can get fish and chips at the Savoy for £23, by all accounts; you can get them at the Ivy; and you can get them at Toffs. Toffs is in Muswell Hill. Muswell Hill is much, much smarter and much, much more earnest than north Islington. Indeed, we always call it 'Muesli Hill', because everyone looks as if they soak serious things overnight for break

fast and wouldn't be seen dead doing dippy eggy, eggy bready or eggy heady. Toffs is a posh fish-and-chip place. Large cod costs £5.80 at Toffs and large chips £1.40. It is not our usual place for fish and chips. Usually, we go to the nice Chinese man round the corner who speaks like a Teletubb.v — 'Ehoh, Ooo won chippie?' — or the Frying Pan, a place run by a couple of Turkish guys just down the road from my son's school. In these instances, large cod is about £2,80 and chips 80p. Is it worth paying more?

Off, first, to the Chinese man, but he's closed — he works very tricky hours — so it's off to the Frying Pan. The Frying Pan is not tarty. The Frying Pan is strip lights and lashings of chipped Formica and a dead pot plant and a poster advertising Peter's Pies and a big jar of those vile eggs that look like bits left over from ophthalmic surgery and, of course, a heated glass cabinet containing a sorry row of battered sausages. Oh, the poor battered sausage. Often, it blames itself for being battered. 1 should have had his tea on the table,' it says. 'I shouldn't have answered back,' it says. It can be very hard, breaking the cycle of abuse. It can be very hard convincing it that the only thing to blame is the British people's quite appalling taste for such things. Needless to say, I do not order a battered sausage as I'm not in the business of running a refuge or anything. I order a large cod and chips. The cod is bought out from the back. It's a large piece, very fresh-looking. It is dipped in the batter and deep-fried while I wait. Next, a dash to Toffs, which is soft lighting and wood and a restaurant at the back and a pot plant that is still alive. It's a cheerier place, to be sure, and there is no wait, as there's a pile of cods ready in the heated cabinet. Is this, I wonder, a good thing or a had thing?

Anyway, I speed home where I offer my partner and son a blind tasting. Both, as it happened, preferred the cheaper version, which, by the way, also seemed to be the larger portion. They agreed the chips were better, crispier and the batter on the cod lighter, crunchier, So, there you have it. Although quite what you have, I'm not sure. Frankly, if you can't be bothered to write me kind letters of support and encouragement, then why should I bother to come up with conclusions? See, it's your loss in the end. Toodle-pip. Or, if you prefer, poodle-tip, which means nothing but! quite like the sound of it, Toffs, 38 Muswell Hill Broadway, London N10,lel: 020 8883 8656. The Frying Pan, 79 Hazetville Road, London N19; tel.' 020 7561 0717. The Battered Sausage Refuge. . oops, no, sally, can't give the address, for obvious reasons. If you would like to help, please send all donations to me and I'll do my best to not send it on and spend it all on myself It's the least! can do.