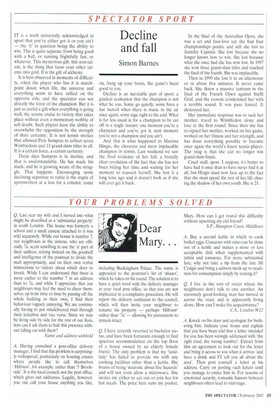 Q. Last year my wife and I moved into what

might be described as a 'substantial property' in south London. The house was formerly a school and a small annexe attached to it was sold separately. While our house is number 7, our neighbours in the annexe, who are officially 7a, seem unwilling to use the 'a' part of their address, relying instead on the goodwill and intelligence of the postman to divide the mail appropriately, and on their own verbal instructions to visitors about which door to knock. While I can understand that there is more cachet to the number 7 in an address than to 7a, and while I appreciate that our neighbours may feel the need to cheer themselves up from time to time by passing off the whole building as their own, I find their behaviour vaguely annoying. We are continually having to put misdelivered mail through their letterbox and vice versa. Since we may be living side by side for the rest of our lives, how can I ask them to halt this pretence without falling out with them?

Name and address withheld A. Having consulted a post-office delivery manager, I find that this problem is surprisingly widespread, particularly on housing estates where people like to call themselves 'Hillview', for example, rather than '5 Brookside'. It is the local council, not the post office, which gives out addresses. Legally, however, you can call your house anything you like,

including Buckingham Palace. The name is appended to the postman's list of 'aliases', which he takes on his round. The solution is to have a quiet word with the delivery manager at your local post office, so that you are not implicated in a complaints procedure. He will report the delivery confusion to the council, which will then invite your neighbour to rename his property — perhaps 'Hillview' rather than '7a' — allowing his pretensions to remain intact.