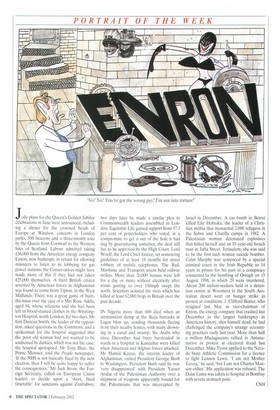 were announced, including a dinner for the crowned heads of Europe at Windsor, concerts in London parks, 500 beacons and a three-month tour by the Queen from Cornwall to the Western Isles of Scotland, Labour admitted taking £36,000 from the American energy company Enron, now bankrupt, in return for allowing ministers to listen to its lobbying for gas power stations; the Conservatives might have made more of this if they had not taken £25,000 themselves. A third British citizen arrested by American forces in Afghanistan was found to come from Tipton, in the West Midlands. There was a great game of huntthe-issue over the case of a Mrs Rose Addis, aged 94, whose relations said she had been left in blood-stained clothes in the Whittington Hospital, north London, for two days. Mr Lain Duncan Smith, the leader of the opposition, asked questions in the Commons, and a spokesman for the hospital suggested that the poor old woman had not wanted to be undressed by darkies, which was not the case; the hospital apologised. Mr Tony Blair, the Prime Minister, told the People newspaper, 'If the NHS is not basically fixed by the next election, then I will be quite happy to suffer the consequences.' Mr Jack Straw, the Foreign Secretary, called on European Union leaders to decide upon a 'short, fixed timetable' for sanctions against Zimbabwe;

two days later he made a similar plea to Commonwealth leaders assembled in London. Equitable Life gained support from 97.3 per cent of policyholders who voted, in a compromise to get it out of the hole it had dug by guaranteeing annuities; the deal still has to be approved by the High Court. Lord Woolf, the Lord Chief Justice, set sentencing guidelines of at least 18 months for street robbery of mobile telephones. The Rail, Maritime and Transport union held railway strikes. More than 20,000 houses were left for a day or more without electricity after winds gusting to over 100mph swept the north. Scientists isolated the virus which has killed at least 62,000 frogs in Britain over the past decade.

IN Nigeria more than 600 died when an ammunition dump at the Ikeja barracks in Lagos blew up, sending thousands fleeing from their nearby homes, with many drowning in a canal and swamp. Six Arabs who since December had been barricaded in wards in a hospital in Kandahar were killed when American and Afghan forces attacked. Mr Hamid Karzai, the interim leader of Afghanistan, visited President George Bush in Washington. President Bush said he was 'very disappointed' with President Yasser Arafat of the Palestinian Authority over a shipment of weapons apparently bound for the Palestinians that was intercepted by Israel in December. A car bomb in Beirut killed Elie Hobeika, the leader of a Christian militia that massacred 2,000 refugees in the Sabra and Chatilla camps in 1982. A Palestinian woman detonated explosives that killed herself and an 81-year-old Israeli man in Jaffa Street, Jerusalem; she was said to be the first such woman suicide bomber. Colm Murphy was sentenced by a special criminal court in the Irish Republic to 14 years in prison for his part in a conspiracy connected to the bombing of Omagh on 15 August 1998, in which 29 were murdered. About 200 asylum-seekers held in a detention centre at Woomera in the South Australian desert went on hunger strike in protest at conditions. J. Clifford Baxter, who resigned last May as vice-chairman of Enron, the energy company that crashed last December in the largest bankruptcy in American history, shot himself dead; he had challenged the company's strange accounting practices early last year. More than half a million Madagascans rallied in Antananarivo in protest at electoral fraud last December. Mike Tyson applied to the Nevada State Athletic Commission for a licence to fight Lennox Lewis. 'I am not Mother Teresa,' he said, tut I am not Charles Manson either.' His application was refused. The Dalai Lama was taken to hospital in Bombay with severe stomach pain.