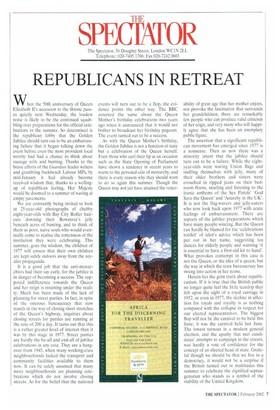 When the 50th anniversary of Queen Elizabeth II's accession to the throne passes quietly next Wednesday, the loudest noise is likely to be the continued squabbling over preparations for the official celebrations in the summer. So determined is the republican lobby that the Golden Jubilee should turn out to be an embarrassing failure that it began talking down the event before even the most provident local worthy had had a chance to think about sausage rolls and bunting. Thanks to the brave efforts of the Guardian leader writers and grumbling backbench Labour MPs, by mid-January it had already become received wisdom that, thanks to a wellingup of republican feeling, Her Majesty would be doomed to a summer of waving at empty pavements.

We are constantly being invited to look at 25-year-old photographs of chubby eight-year-olds with Bay City Roller haircuts downing their Rowntree's jelly beneath acres of bunting, and to think of them as poor, naive souls who would eventually come to realise the rottenness of the institution they were celebrating. This summer, goes the wisdom, the children of 1977 will ensure that their own children are kept safely indoors away from the royalist propaganda.

It is a good job that the anti-monarchists had their say early, for the jubilee is in danger of becoming a success. The supposed indifference towards the Queen and her reign is straining under the reality. Much has been made of the lack of planning for street parties. In fact, in spite of the onerous bureaucracy that now stands in the way of closing short stretches of the Queen's highway, inquiries about closing streets for parties are running at the rate of 200 a day. It turns out that this is a rather greater level of interest than it was by this stage in 1977. Street parties are hardly the be-all and end-all of jubilee celebrations in any case. They are a hangover from 1945, when many working-class neighbourhoods lacked the transport and community facilities available to them now. It can be safely assumed that many more neighbourhoods are planning celebrations which do not involve closing streets. As for the belief that the national events will turn out to be a flop, the evidence points the other way. The BBC assumed the same about the Queen Mother's birthday celebrations two years ago when it announced that it would not bother to broadcast her birthday pageant. The event turned out to be a success.

As with the Queen Mother's birthday, the Golden Jubilee is not a function of state but a celebration of the Queen herself. Even those who curl their lip at an occasion such as the State Opening of Parliament have shown a tendency in recent years to warm to the personal side of monarchy, and there is every reason why they should want to do so again this summer. Though the Queen may not yet have attained the vener

ability of great age that her mother enjoys, nor provoke the fascination that surrounds her grandchildren, there are remarkably few people who can produce valid criticism of her reign, and very' many who will happily agree that she has been an exemplary public figure.

The assertion that a significant republican movement has emerged since 1977 is a nonsense. Then as now there was a minority intent that the jubilee should turn out to be a failure. While the eightyear-olds were waving Union flags and stuffing themselves with jelly, many of their older brothers and sisters were crouched in ripped jeans on their bedroom floors, snarling and listening to the ironic anthems of the Sex Pistols' God Save the Queen' and 'Anarchy in the UK'. It is not the flag-wavers and jelly-eaters who now look back upon 1977 with acute feelings of embarrassment. There are aspects of the jubilee preparations which have many people wincing. But the Queen can hardly be blamed for the 'celebrations toolkit' of idiot's advice which has been put out in her name, suggesting tea dances for elderly people and warning 'it is essential to have a first-aid kit to hand'. What provokes contempt in this case is not the Queen, or the idea of a queen, but the way in which the state bureaucracy has swung into action in her name.

Herein lies the grim truth about republicanism. If it is true that the British public no longer quite feel the little teardop they felt upon the sight of a royal carriage in 1952, or even in 1977, the decline in affection for royals and royalty is as nothing compared with the collapse in respect for our elected representatives. The biggest flop will not be the carnival to be held this June; it was the carnival held last June. The lowest turnout in a modern general election, and the apathy that met candidates' attempts to campaign in the streets, was hardly a vote of confidence for the concept of an elected head of state. Grateful though we should be that we live in a democracy, it would not be a surprise if the British turned out in multitudes this summer to celebrate the dignified septuagenarian who stands as a symbol of the stability of the United Kingdom.