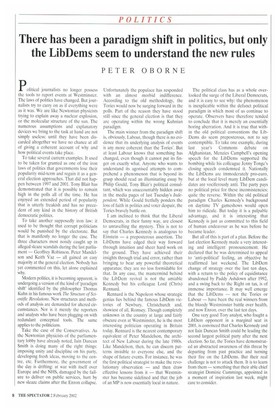 Page 8, 2 February 2002 — There has been a paradigm shift in politics, but only the LibDems seem to understand the new rules
Close

There has been a paradigm shift in politics, but only the LibDems seem to understand the new rules

Political journalists no longer possess the tools to report events at Westminster. The laws of politics have changed. But journalists try to carry on as if everything were as it was. We are like Newtonian physicists trying to explain away a nuclear explosion, or the molecular structure of the sun. The numerous assumptions and explanatory devices we bring to the task at hand are not simply useless: until they have been discarded altogether we have no chance at all of giving a coherent account of why and how political events take place.

To take several current examples. It used to be taken for granted as one of the iron laws of polities that governments lose their popularity mid-term and regain it as a general election approaches. That did not happen between 1997 and 2001. Tony Blair has demonstrated that it is possible to remain high in the polls all of the time. He has enjoyed an extended period of popularity that is utterly freakish and has no precedent of any kind in the history of British democratic politics.

To take another supposedly iron law: it used to be thought that corrupt politicians would be punished by the electorate. But that is manifestly no longer the case. The three characters most noisily caught up in alleged sleaze scandals during the last parliament — Geoffrey Robinson. Peter Mandelson and Keith Vaz — all gained an easy majority at the general election. Nobody has yet commented on this, let alone explained why.

Modern politics, it is becoming apparent, is undergoing a version of the kind of 'paradigm shift' identified by the philosopher Thomas Kuhn in his famous work The Structure of Scientific Revolutions. New structures and methods of analysis are demanded for altered circumstances. Nor is it merely the reporters and analysts who have been plugging on with redundant conceptual tools. The same applies to the politicians.

Take the case of the Conservatives. As the Newtonian physicists of the parliamentary lobby have already noted, lain Duncan Smith is doing many of the right things: imposing unity and discipline on his party, developing fresh ideas, moving to the centre, etc. Furthermore, the government of the day is drifting: at war with itself over Europe and the NHS, damaged by the failure to deliver on public services, hurt by new sleaze claims after the Enron collapse. Unfortunately the populace has responded with an almost morbid indifference. According to the old methodology, the Tories would now be surging forward in the polls. Part of the reason they have stood still since the general election is that they are operating within the wrong Kuhnian paradigm.

The main winner from the paradigm shift is, obviously, Labour, though there is no evidence that its underlying analysis of events is any more coherent than the Tories'. But at least Labour knows that something has changed, even though it cannot put its finger on exactly what. Anyone who wants to understand its agonised attempts to comprehend a phenomenon that is beyond its grasp should read an illuminating essay by Philip Gould, Tony Blair's political consultant, which was unaccountably hidden away in the media pages of last Tuesday's Independent. While Gould fretfully ponders the loss of faith in politics and voter despair, the Tories bravely battle on.

I am inclined to think that the Liberal Democrats, in their funny way, are closest to unravelling the mystery. This is not to say that Charles Kennedy is analogous to Einstein — a preposterous assertion. The LibDems have edged their way forward through intuition and sheer hard work on the ground. They have achieved their insights through trial and error, rather than bringing to bear any powerful theoretical apparatus; they are no less formidable for that. In any case, the mastermind behind the LibDem revival is not the amiable Kennedy but his colleague Lord (Chris) Rennard.

Rennard is the Napoleon whose strategic genius lies behind the famous LibDem victories of Newbury, Christchurch and, showiest of all, Romsey. Though completely unknown in the country at large and fairly obscure even at Westminster, he is the most interesting politician operating in Britain today. Rennard is the nearest contemporary equivalent of Peter Mandelson, the architect of New Labour during the late 1980s. Like Mandelson, then, he can discern patterns invisible to everyone else, and the shape of future events. For instance, he was the first political strategist to make the revolutionary observation — and then draw effective lessons from it — that Westminster has become sidelined and that the job of an MP is now essentially local in nature. The political class has as a whole overlooked the surge of the Liberal Democrats, and it is easy to see why: the phenomenon is inexplicable within the defunct political paradigm in which most of us continue to operate. Observers have therefore tended to conclude that it is merely an essentially boring aberration. And it is true that within the old political conventions the LibDems do seem preposterous, not to say contemptible. To take one example, during last year's Commons debate on Afghanistan, Menzies Campbell's opening speech for the LibDems supported the bombing while his colleague Jenny Tonge's closing speech condemned it. Nationally the LibDems are immoderately pro-euro, but at the local level many LibDem candidates are vociferously anti. The party pays no political price for these inconsistencies; quite the reverse. Within the old political paradigm Charles Kennedy's background on daytime TV gameshows would open him to ridicule. But today it is a palpable advantage, and it is interesting that Kennedy is just as committed to this field of human endeavour as he was before he became leader.

But all of this is part of a plan. Before the last election Kennedy made a very interesting and intelligent pronouncement. He declared that he was determined to appeal to 'anti-political' feeling, an objective he reaffirmed last weekend. The LibDem change of strategy over the last ten days, with a return to the policy of equidistance abandoned by Paddy Ashdown after 1992, and a swing back to the Right on tax, is of immense importance. It may well emerge that the LibDems — not the Tories or Labour — have been the real winners from the bloody Westminster battle over health, and now Enron, over the last ten days.

One very good Tory analyst, who fought a LibDem opponent in a marginal seat in 2001, is convinced that Charles Kennedy and not kin Duncan Smith could be leading the second largest political party after the next election. So far, the Tories have demonstrated an abstracted awareness of this threat by departing from past practice and turning their fire on the LibDems. But their real challenge is not to attack them. It is to learn from them — something that their able chief strategist Dominic Cummings, appointed in a moment of inspiration last week, might care to consider.