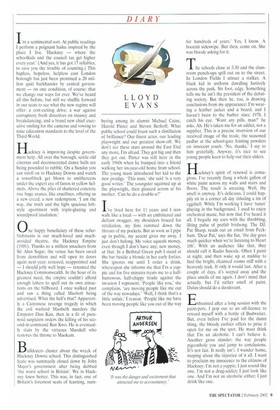 I'm a sentimental sort. At public readings I perform a poignant haiku inspired by the place I live. 'Hackney — where the schoolkids and the council tax get higher every year.' (And yes, it has got 17 syllables, to save you the trouble of counting.) This hapless, hopeless, helpless east London borough has just been promised a 20 million quid backhander by central government — on one condition, of course: that we change our ways for ever, We've heard all this before, but still we shuffle forward in our seats to see what the new regime will offer: a cost-cutting drive: a war against corruption; fresh directives on truancy and breakdancing; and a brand new chief executive smiling for the cameras and vowing to raise education standards to the level of the Third World.

Hackney is improving despite government help. All over the borough, senile old cinemas and deconsecrated dance halls are being pounded to rubble. On a Sunday you can stroll on to Hackney Downs and watch a towerblock get blown to smithereens under the expert eye of fatsos in yellow helmets. Above the piles of shattered concrete rise huge cranes, like crucifixes, offering us a new creed, a new redemption. 'I am the way, the truth and the light spacious loftstyle apartment with triple-glazing and soundproof insulation.'

One happy beneficiary of these refurbishments is our much-loved and muchavoided theatre, the Hackney Empire (1901). Thanks to a million smackers from Sir Alan Sugar, the venue has been saved from demolition and will open its doors again next year; restored, reappointed and — I should jolly well hope — renamed the Hackney Commonwealth. In the hour of its greatest need, the empire couldn't afford enough letters to spell out its own attractions on the billboard. I once walked past and saw a thing called Maobeth being advertised. What the hell's that? Apparently a Cantonese revenge tragedy in which the evil warlord Maobeth murders the Emperor Dun Kan, then in a fit of paranoid suspicion orders the killing of his second-in-command Ban Kwo. He is eventually slain by the virtuous Maoduff who restores the throne to Maokam, Bulldozers cluster about the wreck of Hackney Downs school. This distinguished lye& was summarily closed down by John Major's government after being dubbed the worst school in Britain'. We in Hackney knew better. This was, in fact, one of Britain's foremost seats of learning, num

bering among its alumni Michael Caine, Harold Pinter and Steven Berkoff. What public school could boast such a distillation of brilliance? Our finest actor, our leading playwright and our greatest show-off. We don't see these stars around the East End any more, I'm afraid. They got big and then they got out. Pinter was still here in the early 1960s when he bumped into a friend walking her six-year-old home from school. The young mum introduced her kid to the new prodigy. This man,' she said 'is a very good writer.' The youngster squinted up at the playwright, then glanced across at his mother. Can he do a double-u?'

I've lived here for 11 years and I now walk like a local — with an embittered and defiant swagger, my shoulders braced for retaliation, my fists rammed down the throats of my pockets. But as soon as I pipe up in public, my accent gives me away. I just don't belong. My voice squeals money, even though I don't have any; new money, at that. In a Bethnal Green pub I stand at the bar beside a blonde in her early forties. She ignores me until I order a drink, whereupon she informs me that I'm a yuppie and for five minutes treats me to a halfhumorous, half-chippy tirade against the invasion I represent. 'People like you,' she complains, 'are moving people like me out of the way nowadays."Well, I think that's a little unfair,' I reason. 'People like me have been moving people like you out of the way

for hundreds of years.' Yes, I know. A boorish sideswipe. But then, come on. She was bloody asking for it.

The schools close at 3.30 and the classroom punch-ups spill out on to the street. In London Fields I attract a stalker. A black kid in uniform dawdling furtively across the park. Six foot, edgy. Something tells me he isn't the president of the debating society. But then he, too, is drawing conclusions from my appearance: I'm wearing a leather jacket and a beard, and I haven't been to the barber since 1978. I catch his eye. 'Want any pills, man?' he asks. Ah. He's taken me for an addict, not a supplier. This is a precise inversion of our received image of the trade, the seasoned pedlar at the school-gate foisting powders on innocent youth. 'No, thanks,' I say to him gratefully. Anyway, it's nice to see young people keen to help out their elders.

Hackney's spirit of renewal is contagious. I've recently flung a whole gallon of white paint across my walls and stairs and floors. The result is amazing. Well, the smell is anyway. It's delicious. I could happily sit in a corner all day inhaling a tin of eggshell. While I'm working I have 'tunes' playing in the background. I used to enjoy orchestral music, but now that I've heard it all, I beguile my ears with the throbbing, lilting pulse of prefab birdsong. The DJ, Pat Sharp, reads out an email from Peckham. 'Dear Pat,' says the fan, the day goes much quicker when we're listening to Heart 106'. With an audience like that, they should call it Radio Suicide. Often I paint at night, and then wake up at midday to find the bright, cleansed rooms stiff with a heavenly reek. If only it would last. After a couple of days, it's seeped away and the place smells of me again. I don't mind that actually, but I'd rather smell of paint. Dulux should do a deodorant.

Exhausted after a long session with the paint-pots, I pop out to an off-licence to reward myself with a bottle of Budweiser. But, even before I've paid for the damn thing, the bloody cashier offers to prise it open for me on the spot. He must think that I'm an alcoholic. I can't believe it. Another gross slander; the way people pigeonhole you and jump to conclusions. It's not fair. It really isn't. I wander home, moping about the injustice of it all. I want to proclaim my innocence to the citizens of Hackney: I'm not a yuppie; I just sound like one. I'm not a drug-addict; I just look like one. And I'm not an alcoholic either; I just drink like one,