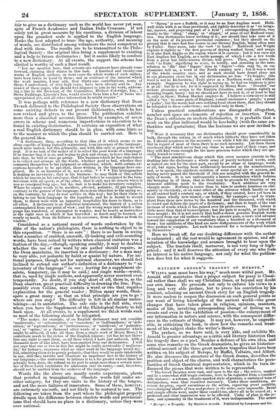 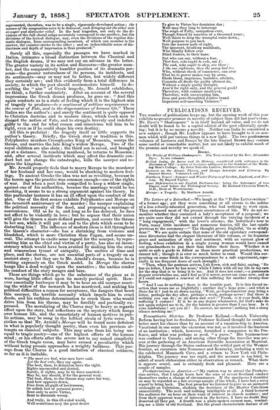 MATTHEW ARNOLD'S TRAGEDY OF MEROPE. * " WILFUL man must have

his way," much more wilful poet. Mr. Arnold still maintains that a proper subject for poesy is Classi- cal rather than shall we say Christian times, or beyond any doubt our own times. He proceeds not only to enforce his views in a long and very able preface, but to prove his conviction by his conduct, selecting an ancient Greek story for an English tragedy. It were useless to reopen the discussion on such general points as our want of living knowledge of the ancient world—the great changes that have taken place in religion, opinions, manners, modes of life, involving corresponding change of feeling as to events and even in the exhibition of passion—the enlargement of our information in nature and science, with the consequent diffir- ence in the estimate of things. It may not, however, be unprofit- able, in criticizing the book, to show how the remarks and treat- ment of his subject shake the writer's theory. The preface, as we have said, is very able, and exhibits Mr. Arnold to greater advantage as a critic and literal.), historian than his tragedy does as a poet. Besides a defence of his own idea, and some nice remarks on the Greek dramatists, he gives an historico- critical account of the three great modern tragedies that have been written on his subject of Merope, by Maffei, Voltaire, and Alfieri. He also discusses the structure of the Greek drama, describes the position and object of the chorus, and well characterizes the pecu- liarities of Greek theatrical representation, which in its turn in- fluenced the pieces that were written to be represented. "The Greek theatres were vast, and open to the sky ; the actors, masked and in a somewhat stiff tragic costume, were to be regarded from a consider- able distance : a solemn, clearly-marked style of gesture, a sustained tone of declamation, were thus rendered necessary. Under these conditions, in- tricate by-play, rapid variations in tlw action, requiring great mobility, ever-changing shades of tone and gesture in the actor, were impossible. Broad and simple effects were, under these conditions, above all to be aimed at ; a profound and clear impression was to be effected. Unity of plan in the ac- tion, and symmetry in the treatment of it, were indispensable. The actual

• Nerope : a Tragedy. By Matthew Arnold. Published by Longonui and Co.

represented, therefore, was to be a single, rigorously-developed action ; the masses of the composition were to be balanced, each bringing out the other into stronger and distincter relief. In the best tragedies, not only do the di- visions of the full choral songs accurately correspond to one another, but the divisions of the lyrical dialogue, nay, even the divisions of the regular dra- matic dialogue, form corresponding members, of which one member is the answer, the counter-stroke to the other ; and an indescribable sense of dis- tinctness and depth of impression is thus produced."

Surely. all this, especially the passages we have marked in Italics, intimates a broad distinction between the Classical and the English drama, if we may not say an advance in the latter. The greater variety in its action and discourse—the greater num- ber, and the comparatively humbler position of its dramatis per- sonte—the greater naturalness of its persons, its incidents, and its sentiments—may or may not be better, but widely different they certainly are ; and this evidently from a total difference in society, to which the poet should accommodate himself. In de- scribing the " aim " of Greek tragedy, Mr. Arnold establishes, we think, a further contrariety. After an account of the several impressions the Greek drama produces he goes on : "And this again conducts us to a state of feeling which it is the highest aim of tragedy to produce—to a sentiment of sublime acquiescence in the course of Fate and the dispensations of human life." These Italics are the author's; ; and surely the sentiment is quite opposed to Christian doctrine and to modern ideas' which teach man to discard the notion of Fate, and to struggle bravely and indefati- gably to the end for what reason and conscience tell him to be right, even as if he could shape his own destiny.

All this is prefatial : the tragedy itself as little supports its author's theory. Briefly, the Greek story or tradition is this. Polyphontes murders Cresophontes King of Messenia, usurps the throne, and marries the late King's widow Merope. Two of the royal children are also slain ; the third son is saved, and brought up at a distance. On reaching manhood, he returns to Messenia ; and, after several incidents which may affect the dramatic con- duct but not change the catastrophe, kills the usurper and re- gains the kingdom.

Mr. Arnold properly feels that to marry Merope to the murderer of her husband and her sons, would be shocking to modern feel- ings. To ancient Greeks the idea was not so revolting, because in the heroic ages the practice was common enough—one of the rights of war. But when a poet feels compelled to keep a widow single, against one of his authorities, because the marriage would be too shocking, it seems to us a strong argument against his theory. In this particular instance it has an ill effect upon the conduct of the plot. One of the first scenes exhibits Polyphontes and Merope on the twentieth anniversary of the murder; the usurper explaining the political necessity of the deed, and proposing a marriage of convenience. Old as he is, and long as he has delayed, he does not affect to be violently in love ; but he argues that their union will give the Queen a more defined position, and, secure the throne to her son, while it will put an end to the plots which seem to be disturbing him! The influence of modern ideas is felt throughout the Queen's character—she has a shrinking from violence and bloodshed, which is more Christian than Pagan, and seems un- real. The attempt to excite some regard for the usurper, by repre- senting him as the chief and victim of a party, has also an incon- sistency which would have been avoided by making him the cruel and remorseless tyrant of antiquity. The unities of time and place, and the chorus, are not essential parts of a tragedy on an ancient story ; but they are to Mr. Arnold's drama, because he is writing expressly on the Greek model. In Merope the chorus hangs like a dead weight upon the narrative ; the unities render the conduct of the story meagre and bare. These are things which go to the substance of the piece as it were, having little effect upon its merely poetical spirit. How- ever essentially burlesque it may be to hear an old usurper court- ing the widow of the monarch he has murdered, and making his political difficulties a reason for acceptance, the dangers that beset this usurper, the terrible necessity which impels him to cruel deeds, and his ruthless determination to crush those who would drive him from his throne, may be forcibly and poetically ex- pressed. The moralizing of the Chorus may be heavy as regards effect upon the story, but reflections on the mystery which hangs over human life, and the uncertainty of human motives in pub- lic actions, may be sung in the loftiest strain of lyric verse. It strikes us that Mr. Arnold's Merope will be found more deficient in what is popularly thought poetry, than even his previous at- tempts on classical subjects. This may arise from his being un- equal to tragic poetry--one of the highest efforts of the human mind ; or his efforts after the severe not to say naked simplicity of the Greek tragic verse, may have caused a peculiarity which without being prosaic approaches a weighty baldness. This pas- sage from the Chorus is a good imitation of classical coldness, so far as it is imitable.

"The most are bad, wise men have said. Let the beat rule, they say again.

The best, then, to dominion have the right. Rights unconceded and denied,

Surely, if rights, may be by force asserted—

May be nay should, if for the general weal. The beet, then, to the throne may carve his way, And hew opposers down, Free from all guilt of lawlessness, Or selfish lust of personal power; Bent only to serve Virtue, Bent to diminish wrong.

And truly, in this ill-ruled world, Well sometimes may the good desire To give to Virtue her dominion due ; Well may they long to interrupt

The reign of Folly, usurpation ever,

Though fenced by sanction of a thousand years ; Well thirst to drag the wrongful ruler down ; Well purpose to pen back Into the narrow path of right, The ignorant, headlong multitude, Who blindly follow ever Blind leaders, to their bane.

But who can say, without a fear, That beat, who ought to rule, am I; The mob, who ought to obey, are these; I the one righteous, they the many bad ?—

Who, without check of conscience, can aver

That he to power makes way by arms, Sheds blood, imprisons, banishes, attaints, Commits all deeds the guilty oftenest do,

-Without a single guilty thought,