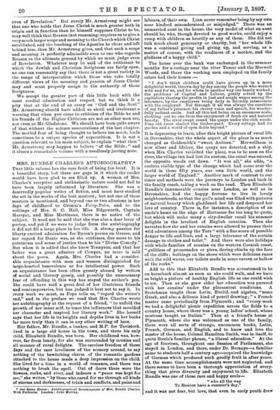 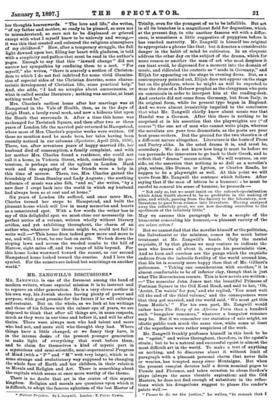 MRS. RUNDLE CHARLES'S AUTOBIOGRAPHY.* THIS little volume has the rare

fault of being too brief. It is a beautiful story, but there are gaps in it which the reader would have been glad to see filled up. A woman of Mrs. Charles's receptive and enthusiastic nature could not fail to have been largely influenced by literature. She was a deservedly popular writer of fiction, and must have studied the art in the works of the best masters ; but not one of these masters is mentioned, and beyond one or two allusions in her days of childhood to Grimm's Fairy-Tales, and to the writings of Mrs. S. C. Hall, Miss Edgeworth, Captain Marryat, and Miss Martineau, there is no notice of the subject. It need not be said that she was also a dear lover of poetry, and yet if we were to judge from the autobiography it did not fill a large place in her ]ife. A strong passion for liberty excited admiration for Byron's poems on Greece, and her regard for Dante was, as she confesses, due more to his patriotism and sense of justice than to his "Divine Comedy." But when it is added that she knew Tennyson, and that her father was a great admirer of Cowper, no more is said about the poets. Again, Mrs. Charles had a consider- able acquaintance with men and women distinguished for large-hearted benevolence or for intellectual power. Such an acquaintance has been often grossly abused by writers of social and literary gossip, and possibly the unnecessary fear of offending in this way has stayed the author's pen. She could have said a great deal of her illustrious friends and contemporaries, but has judged it best not to say it. In every work we must, as Pope tells us, "regard the writer's end," and in the preface we read that Mrs. Charles wrote her autobiography at the request of a friend, "to unfold the growth of her inner self, to trace the influences that moulded her character and inspired her literary work." She herself says that her life in its heights and depths lives in her books Ear more truly than it can in any other writing of hers.

Her father, Mr. Rundle, a banker, and M.P. for Tavistock, Lived in a large old house in the town, and there his only :Ind, Elizabeth Rundle, was born. Her childhood was, how- ever, far from lonely, for she was surrounded by cousins and all manner of rural delights. The careless freedom of those days and the rare loveliness of the scenery around, to say nothing of the bewitching charm of the romantic gardens attached to the house made a deep impression on the child. She lived for a time in a world of romance, and there was nothing to break the spell. Out of doors there were the flowers, rocks, and river, and indoors a "peace was kept for me," she writes, " by those who cared for me through all kinds of storms and darknesses, of trials and conflicts, and pains and

labours, of their own. Jean never remember being by my own near kindred misunderstood or misjudged." There was an unmarried aunt in the house, the very model of what an aunt should be, who, though devoted to good works, could enjoy a romp with children as heartily as any of them. She did not talk much about generosity or charity, but "her whole life was a continual giving and giving up, and serving, as a matter of course, with the readiness of a mother, and the gladness of a happy child."

The house over the bank was exchanged in the summer months for a cottage near the river Tamar and the Morwell Woods, and there the working men employed on the family estate had their homes :—

"I don't think children could have grown up in a more delightful world, thrown day by day among the people who worired with and for us, and for whom in another way our family worked; the problems of Capital and Labour, gently solved by the capitalists sharing the profits in just and ample wages among the labourers, by the employers being daily in friendly intercourse with the employed. For through it all was always the sunshine of my father's presence, his cheery voice and speech, his wonder- fully radiant smile. And all this not being on an enormous scale, shutting out no one from the enjoyment of fresh air and natural beauty. The river swept round the quays under the rich woods. Fine old trees shaded the timber-yard. Every cottage had its garden and a world of open fields beyond."

It is depressing to learn, after this bright picture of rural life in Devonshire, that the whole aspect of the place is as much

changed as Goldsmith's "sweet Auburn." Morwellham is now silent and lifeless, the quays are deserted, not a ship, when Mrs. Charles revisited the place, was to be seen on the river, the village inn had lost its custom, the canal was unused, the opposite woods cut down. "It was all," she adds, "a curious visible type of the change which had come over the world in these fifty years, our own little world, and the larger world of England." Another mark of contrast to our times and methods were the journeys to London and back in the family coach, taking a week on the road. Then Elizabeth Rundle's innumerable cousins near London, as well as in Devonshire, had the happy fortune to live in lovely neighbourhoods, so that the girl's mind was filled with pictures of natural beauty which gladdened her life and deepened her love of country. There is, for instance, a description of an uncle's home on the edge of Dartmoor far too long to quote, but which will make many a city-dweller recall his summer delights in the loveliest of English counties. Then she narrates how she and her cousins were allowed to pursue their wild adventures among the Tors "with a fine scorn of possible danger to life and limb, and a large tolerance of the certain damage to clothes and toilet." And there were also holidays with whole families of cousins on the western Cornish coast, "guiltless of promenades or piers, daring climbs up the face of the cliffs ; bathings on the shore which were delicious races with the wild waves, our toilets made in some cavern or hollow of the rocks."

Add to this that Elizabeth Rundle was accustomed to be on horseback almost as soon as she could walk, and we have as bright a picture of healthy English life as one could wish to see. Then as she grew older her education was pursued with her cousins' under the pleasantest conditions. A Scotchman taught them Latin, Euclid, and algebra, "some Greek, and also a delicate kind of pencil drawing;" a French master came periodically from Plymouth ; and "every week we had a delightful picnic expedition across the fields to a country house, where there was a young ladies' school, whose mistress taught us Italian." Then at a friend's house at Plymouth, where she was welcomed as one of the family, there were all aorta of strange, uncommon books, Latin, French, German, and English, and to know and love the master of the house, Colonel Hamilton Smith, was in itself, to quote Steele's familiar phrase, "a liberal education." At the age of fourteen, throughout one Session of Parliament, she stayed in London, and there, under Dr. Bernays—a familiar name to students half a century ago—acquired the knowledge of German which produced such goodly fruit in after years. At the same time accomplishments were not neglected, and there seems to have been a thorough appreciation of every- thing that gives diversity and enjoyment to life. Elizabeth Rundle was one of those rare and happy souls-

" who all the way To Heaven have a summer's day,"

and it was not fear, but love, that even in early youth drew her thoughts heavenwards. "The love and life," she writes, "of my father and mother, so ready to be pleased, so sure not to misunderstand, so sure not to be displeased or grieved except with what I myself knew to be unlovely and wrong,— it was this that created and coloured the religious atmosphere of my childhood." How, after a temporary struggle, the full light dawned upon her, filling her heart with gladness, is told with a simplicity and pathos that must be read in the author's pages. Enough to say that this "inward change" did not narrow her sympathies by confining them to a sect. "For myself," she writes, "there is scarcely a section of Christen- dom to which I do not feel indebted for some vivid illumina- tion of especial sides of the Christian doctrine, some charac- teristic development of Christian life, some practical help." And, she adds, "I had no scruples about amusements, or what is called secular literature ; nothing was secular, at least nothing need be."

Mrs. Charles's earliest home after her marriage was at Hampstead in the Vale of Health, then, as in the days of Leigh Hunt, a lovely rural nook, and now a hideous blot upon the Heath that surrounds it. After a time this home was exchanged for Tavistock Square, and then after two or three years of London life the married pair returned to Hampstead, where most of Mrs. Charles's popular works were written. Of these no mention need be made here, her tales having been recently noticed in our columns (Spectator, April 25th, 1896). There, too, after seventeen years of happy married life, her husband died of consumption, a family complaint, and with her mother Mrs. Charles found a residence, she could not call it a home, in Victoria Street, which, considering its pre- tensions, is perhaps one of the ugliest in London. Hard work and the sympathy of wise friends were a help in this time of sorrow. There, too, Mrs. Charles gained the friendship of Dean Stanley and Lady Augusta ; the soothing influence of music was also felt, "and so," she writes, "by a new door I crept back into the world in which my husband had always been so at rest and at home."

Six years of London life sufficed, and once more Mrs. Charles turned her steps to Hampstead, and built the pleasant house which will live in many memories and hearts as a consecrated spot. With a few words the writer has to say of this delightful spot we must close our necessarily im- perfect notice of a volume, written wholly without literary artifice, and yet exhibiting throughout, the charm of an author who, whatever her theme might be, could not fail to write well :—" This home does indeed grow more and more to me, and will, I trust, be our last on earth. We look down the sloping lawn and across the wooded combe to the hill of Harrow, eight miles off, and the range of hills beyond. For this home looks westward toward the sunset, as our second Hampstead home looked toward the sunrise. And I love the symbol. For the sunsets are indeed but sunrisings on another world."