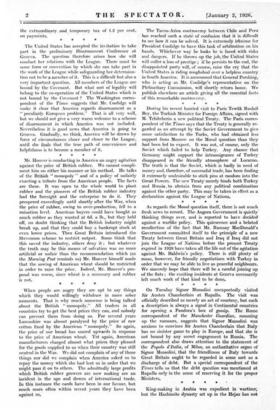 Page 10, 2 January 1926 — The Tacna-Arica controversy between Chile and Peru has reached such
Close

The Tacna-Arica controversy between Chile and Peru has reached such

a state- of confusion that it is difficult to see how it can be solved. It is extremely irksome for President Coolidge to have this task of arbitration on his hands. Whichever way he looks he is faced with risks and dangers. If he throws up the job, the United States will suffer a loss of prestige ; if he persists to the end, the disappointed party will, of course, raise the cry that the United States is riding roughshod over a helpless country. in South America; It is announcedthat General Pershing,- who is acting as Mr. Coolidge's- representative on the-. Plebiscitary Commission, will shortly return home. We publish elsewhere an article giving all the- essential facts of this remarkable controversy.