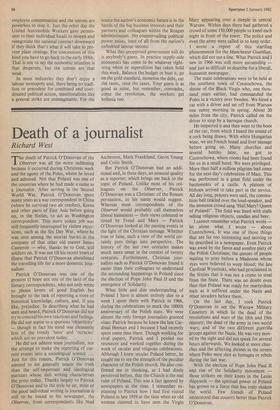 Death of a journalist

Richard West The death of Patrick O'Donovan of the Observer was all the more saddening because it occurred during Christmas week and the agony of the Poles, whom he loved and admired. Not that Poland was one of the countries where he had made a name as a journalist. After serving in the Second World War, Patrick O'Donovan spent many years as a war correspondent in China (where he survived two air crashes), Korea and other parts of East Asia before going on, in the Sixties, to act as Washington correspondent. This more sedate job was still frequently interrupted by violent excur- sions, such as the Six Day War, where he was seen among the mortar bursts in the company of that other old master James Cameron — who, thanks be to God, still soldiers on. It was not till his recent years of illness that Patrick O'Donovan abandoned the travelling life for a more domestic jour- nalism.

Patrick O'Donovan was one of the greatest (I hope not one of the last) of the literary correspondents, who not only wrote to please lovers of good English but brought to the task of reporting a store of historical knowledge, culture, and, if you like, prejudice. In describing what he had seen and heard, Patrick O'Donovan did not try to conceal his own reactions and feelings. He did not aspire to a spurious 'objectivity' — though in fact his mind was pleasantly free of the trendy 'isms' and `ocracies' which are so prevalent today.

He did not admire team journalism, nor the attempt to make the reporting of cur- rent events into a sociological science

Just for this reason, Patrick O'Donovan seemed to me generally nearer the truth than the self-important and ideological puritans whose dull writing characterises the press today. Thanks largely to Patrick O'Donovan and to the style he set, most of the good individual writing in journalism is still to be found in his newspaper, the Observer, from correspondents like Neal

But Patrick O'Donovan had an addi- tional and, in these days, an unusual quality as a reporter; which brings me back to the topic of Poland. Unlike most of his col- leagues on the Observer, Patrick b'Donovan was a Christian: of the Roman persuasion, as his name would suggest. Whereas most correspondents of the Observer` would probably call themselves liberal humanists — their views coloured or tinted by Freud and Marx — Patrick O'Donovan looked at the passing events in the light of the Christian message. Whether true or false, such a view of the world cer- tainly puts things into perspective. The history of the last two centuries makes much more sense in the context of twenty centuries. Furthermore, Christian jour- nalists such as Patrick O'Donovan found it easier than their colleagues to understand the astounding happenings in Poland since the election of Pope John Paul II and the emergence of Solidarity.

What little and dim understanding of Poland I have is almost entirely due to a week I spent there with Patrick in 1966, during the celebrations to mark the 1000th anniversary of the Polish state. We were almost the only foreign journalists granted visas: Patrick because he knew the late Car- dinal Heenan and I because I had recently spent some time there. Though working for rival papers, Patrick and I pooled our resources and worked together during the week of secular and religious celebrations. Although I knew secular Poland better, he taught me to see the strength of the peculiar character of the Polish church. He also con- firmed me in thinking, as I had dimly perceived before, that the Church is the real ruler of Poland. This was a fact ignored by newspapers at the time. I remember ex- plaining to Patrick how I had first visited Poland in late 1959 at the time when an old woman claimed to have seen the Virgin

Mary appearing over a steeple in central Warsaw. Within days there had gathered a crowd of some 150,000 people to kneel each night in front of the tower. The police and even the army were called in to keep order. I wrote a report of this startling phenomenon for the Manchester Guardian, which did not use a line. What Patrick and I saw in 1966 was still more astounding and just as difficult to describe for a liberal, humanist newspaper.

The main celebrations were to be held at the southern town of Czestochowa, the shrine of the Black Virgin who, one thou- sand years earlier, had commanded the Poles in a victory over Sweden. We hired a car with a driver and set off from Warsaw one sunny morning in spring. About 20 miles from the city, Patrick called on the driver to stop by a baroque church.

He inspected it and then went to the boot of the car, from which I heard the sound of a cork being drawn. With white Hungarian wine, we ate French bread and liver sausage before going on. Many churches and several bottles later, we got to Czestochowa, where rooms had been found for us in a small hotel. We were privileged, More than half a million pilgrims had come for the next day's celebration of Mass. This was performed in a great field under the battlements of a castle. A platoon of bishops arrived to take part in the service. All day long, prayers were said, the commu- nion bell tinkled over the loud-speaker, and the immense crowd sang 'Hail Mary! Queen of Poland!'. The field was lined with stalls selling religious objects, candles and beer.

I cannot remember what Patrick wrote let alone what I wrote — about Czestochowa. It was one of those things that are far too interesting and moving to be described in a newspaper. Even Patrick was awed by the fierce and sombre piety of the Polish Christians; the queues of people waiting to pray before a Madonna whose eyes were believed to weep blood; the late Cardinal Wyszinski, who had proclaimed in the Sixties that it was not a crime to steal from the State. There was no doubt even then that Poland was ready for martyrdom such as it suffered under the Nazis and other invaders before them.

On the last day, I took Patrick O'Donovan to see the Warsaw Military Cemetery in which lie the dead of the revolutions and wars of the 18th and 19th century; the dead of the army in two world wars; and of the two different guerrilla groups against the Nazis. He was very mov- ed by the sight and did not speak for several hours afterwards. We looked at more chur- ches and the affecting shrines in the streets where Poles were shot as hostages or rebels during the last war.

With the election of Pope John Paul II and rise of the Solidarity movement those strikers on their knees in the Lenin shipyards — the spiritual power of Poland has grown to a force that has truly shaken the world. Few friends of Poland understood that country better than Patrick O'Donovan.